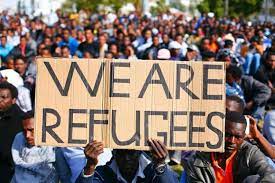 Almost two million people have fled Ukraine since the Russian invasion began. Most of them are Ukrainian citizens, but along with foreigners who were there for work or study at the time of the Russian army’s entry.

Among these, there are many from African countries, but they are having great difficulty in leaving the country. According to the stories told by them, the border guards, especially the ones guarding the border with Poland where many are trying to escape, are preventing them from crossing, favoring white people instead.

Chineye Mbagwu, a 24-year-old Nigerian doctor living in the Western Ukrainian city of Ivano-Frankivsk, about 100 miles from the Polish border, told the New York Times that she spent more than two days stranded at the border near Medyka, a small Polish town to which most of the refugees are heading these days. Mbagwu said that the border guards are letting Ukrainians through but blocking foreigners, in some cases, beating them with sticks, slapping them, and pushing them to the back of the lines of people waiting to cross the border.

According to Mbagwu, the Ukrainian guards are rejecting mainly African, Middle Eastern, or Indian people, and his testimony has also been confirmed by other non-Ukrainian refugees. Ahmed Habboubi, a 22-year-old Franco-Tunisian medical student, said all foreign nationals were told to go to a gate at the Medyka border, where only four people were allowed to pass every two hours.

Instead, Ukrainian citizens were told to go to another crossing point, where they were allowed to pass freely. Habboubi said he was beaten repeatedly by Ukrainian border guards, so much so that when he finally managed to enter Poland, the Polish authorities had to take him directly to the hospital. “It was absolute chaos. We were treated like animals. And there are still thousands of people stranded there,” he told the New York Times.

Such testimonies were also given by various people on social networks, through videos and photos that showed the violence by the Ukrainian authorities. In a video that has been widely circulated in recent days, some policemen in the Lviv station are seen preventing non-white people from taking a train to reach the border with Poland.

Rachel Onyegbule, a Nigerian medical student in Lviv, told CNN that while she was in the city of Shehyni, on the border with Poland, dozens of buses arrived to transport Ukrainian citizens across the border, but she and other foreign refugees were not allowed to go up.

Saakshi Ijantkar, an Indian medical student in Ukraine, also shared a similar experience. The border guards, according to her account, allowed 30 Indians to cross the border only after 500 Ukrainians had already passed. She also said that to cross the border you have to go through two checkpoints, which are about 5 km apart. Ukrainians, according to her account, would be transported on that journey in taxis and buses, while people of all other nationalities are made to walk. She, too, told of episodes of violence: after long waits, the border guards would in fact only allow women to pass, while the male refugees who tried to flee would have been beaten for no reason.

Ukrainian Deputy Interior Minister Anton Herashchenko rejected all these accusations and said that they are simply trying to get women and children to leave first and therefore, foreign men have to wait, as well as Ukrainian men.

Andriy Demchenko, the spokesperson for the service that manages Ukrainian border controls, also rejected accusations of racism and violence against foreign refugees at the borders. Speaking of the long lines of refugees that are being created at the borders, he told CNN that it affects everyone, Ukrainians and non-Ukrainians, due to the huge increase in the number of people trying to leave Ukraine these days, and "there is absolutely no division by nation, citizenship or class”.

The Food Crisis: Why the war could leave a long-term impact on Africa’s food security?