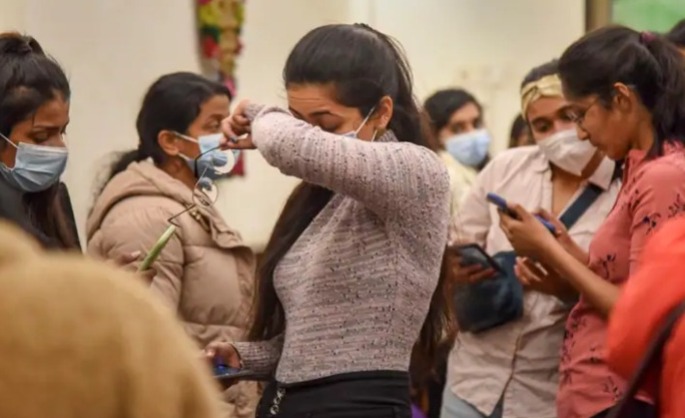 Several videos showing thousands of Indian and foreign students being allegedly stopped, harassed, and beaten by Ukrainian authorities while trying to flee the war-torn Ukraine from various borders have become a hot and trending topic on social media platforms.

According to the reports, students and other citizens who are being harassed have come from the overcrowded border between Ukraine and Poland. In one of the videos, a student is repeatedly kicked by a uniformed guard.

Another video shows Ukrainian soldiers firing into the air and forcing the students back to Ukraine. In a video, a girl can be seen screaming and saying that Ukrainian police pulled her and her companion and hit them with batons. She also claimed that police tried to push their car into a group of students. Rahul Gandhi, the Congress leader, also shared the video.

Rahul Gandhi said the government should immediately share detailed evacuation plans with people and students stuck in Ukraine. My heart goes out to the Indian students and various citizens who are suffering from this violence and their families who are watching these videos. It's something that no family should watch; it’s very heartbreaking.

The government of India must urgently provide a detailed evacuation plan for those stranded and their families. "We cannot cease to support our own citizens," he posted on Twitter.

Another Indian student claimed that the Ukrainians did not allow them to cross the road to Poland because the Indian government sided with Russia in this matter. Some students have also claimed that they were held hostage in the cold and were not given water or food.

Another group of 21 Indian students from Chernivtsi National University is stranded in Chernivtsi, Ukraine. Some alleged that female students were harassed and beaten by Ukrainian police guards, the Indo-Asian News Service (IANS) reported.

Most of the students were stuck on the roads, running out of money and food. For the last four days, they have been eating only a few spoons of normal rice. Now the embassy has asked them to take a train at their own risk to leave the city of Ukraine. So far, they have spent nearly Rs 2.5 lakh on the trip to Chernivtsi. There are no trains available and now they are losing hope, "students told IANS news.

Poland's ambassador to India, Adam Burakowski, announced Sunday that Poland will allow Indian students fleeing Ukraine to enter the country without a visa.

In several reports of a flood of harassment, Foreign Minister Harsh Vardhan Shringla said India had conveyed "deep concerns" to Ukraine and Russia about the security of its people in various cities in Ukraine. rice field.

According to Harsh Vardhan Shringla, the State Department is doing all necessary in order to ensure the safety and security of our Indian citizens in Ukraine are given the highest priority, under the direct supervision of the Secretary of State and the general direction of the Prime Minister.

Shringla said India has evacuated about 2,000 of its citizens from Ukraine, and 1,000 of them have flown home on charter flights from Hungary and Romania.

The government launched "Operation Ganga" to evacuate stranded Indians from Ukraine. India has already sent teams to Poland, Romania, Hungary, and Slovakia to support the evacuation of Indians from Ukraine through border crossings with these countries.