What is happening in the Ukrainian territories occupied by the Russians? 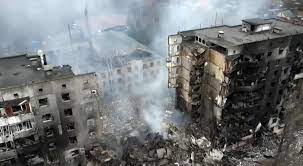 On March 16, both RT and Radio Sputnik reported that a "founding congress" for a "new governing body" called the "Relief Committee for Peace and Order" was held in the Cherson region of Ukraine. RT's report includes a video that shows several people sitting at a table in the regional administration building; in the video, a man says that "the current regional authority practically no longer exists" and that the region needs a structure "that can take responsibility; for restoring order." He then adds that, in a personal capacity, "the Russian Federation is a priority." Both RT and Sputnik used the same title, "Cherson's new regional authorities want stable ties with Russia."

Among the people shown in the video is activist Kirill Stremousov (he is speaking), former mayor of Cherson and current city councilor Volodymyr Saldo, city council Igor Semenchev and former professor Tatyana Kuzmich, arrested by the secret services Ukrainians in 2020 on suspicion of working for the Federal Security Service of the Russian Federation (FSB). On March 13, the same group of people appeared in a small demonstration to celebrate one year of Cherson's "liberation from fascists," where communist symbols banned in Ukraine were displayed. According to the Russian Defense Ministry, the demonstration allowed the inhabitants of Cherson to "honor the memory of the Soviet warriors" for the first time since 2015; Russian public broadcaster Perviy Kanal showed a video of Stremousov at the demonstration promising to "cleanse the city of fascism." Thousands of people had come to the city to protest in support of Ukraine.

It isn't easy to understand to what extent the Ukrainian authorities in Cherson have been ousted from the Russian occupation. However, the regional authorities and the city authorities continue to keep the inhabitants informed about the war, the economy, their jobs, and widespread misinformation. On March 17, the Cherson regional prosecutor announced an investigation into the "pseudo-authorities of the region."

The Russian authorities have always insisted on the absence of plans for the occupation of Ukraine. However, Dmitry Peskov, a spokesman for the Kremlin, refused to answer Meduza's question about whether or not Russia has links to attempts to establish alternative "authorities" over the territory occupied by its troops directing Meduza to the Russian defense minister.

Witnesses testified on the Hromadske website that Russian security officials went on the hunt for right-wing activists, fighters who took part in the war in Donbas, human rights activists, and Crimean Tatars. According to local activists, among the informants of the Russian security forces is Kirill Stremousov, the man who attended the "congress" in the regional administration. Journalist Oleg Baturin disappeared in the region on March 12; the same fate befell on March 15 to Maxim Negrov, who had fought in the Donbas. Sergey Khlan, Cherson regional deputy, said local farmers were forced to sign "cooperation agreements" that require them to provide food to Russian troops.

According to the Ukrainian government, five local officials are being held by Russian security forces in the occupied territories and surrounding areas. After the mayor of Skadovsk, Alexander Yakovlev, was kidnapped on March 16, locals held a demonstration to demand his release. In response, Russian security forces fired into the air, fired smoke bombs and tear gas. Mayor Yakovlev was released, while his deputy is still a prisoner.

Serhii Priyma,  the chairman of the Melitopol district council (another Russian official), was arrested on March 13 by Russian forces. Other people held hostage include Melitopol mayor Ivan Fedorov (freed on March 16 in exchange for nine Russian soldiers), and activist Olga Gaisumova, who coordinated the anti-occupation protests. According to the Melitopol authorities, on March 17, Russian security forces went door to door and searched people.

A pro-Russian official in Melitopol said that a new government would also be formed after Mayor Fedorov's kidnapping. City councilor Galina Danilchenko announced the formation of "people's committees," while Russian propaganda channels such as Radio Sputnik have begun to mention her as the "interim mayor" of the city. From what can be seen in some posts circulated on social networks (like this one), Danilchenko, on which the Ukrainian public prosecutor's office has launched an investigation for treason, has participated in events that promote his image as a mayor.

The Russian authorities have not responded to reports of kidnappings taking place within the occupied Ukrainian territory, nor have they responded to the news that the mayor of Melitopol has been exchanged for nine Russian soldiers.