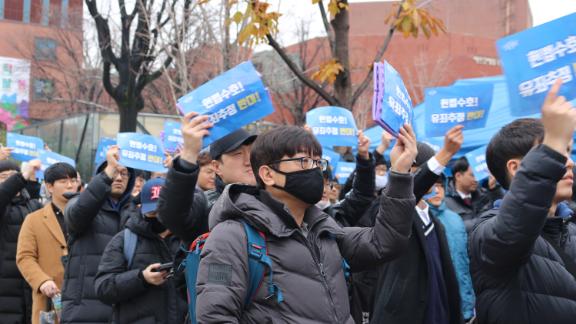 Women in South Korea have been protesting for labor inequalities and pay by using emoji or images similar to (🤏🏻) for “small” penises to mock their size. And this is taken as a matter of pride for men and a detrimental factor of their “masculinity” globally. In a response to this, South Korean men are saying that women are insulting their bodies, and this has led to the development of a new storm of anti-feminism movement, with the advent of a reversal Me Too movement to fight back.

Me Too, the movement started to gain massive momentum in 2017 and 2018, when incidents of sexual exploitation of many Hollywood actresses like Gwyneth Paltrow, Jennifer Lawrence, among many others, and arguably one of the most successful feminist movements of our times.

In this movement, people, primarily women, from all walks of life, have come out on social media and revealed their own experiences with sexual harassment and violence, in a bid to not only expose the criminals but also to raise awareness. So essentially, a reversal of this movement would mean the anti-agenda - women, and misogynists, at least subtle, if not blatant. Because we live in a world where the subtle forms of sexism and misogyny are natural and nothing to fret about, and if someone does show objection, they are deemed crazy.

Coming back to the context of South Korea, this is a very concerning development, if you believe in gender equality. This is because South Korea is one of those nations, like many Asian nations, where the society is systematically sexist and misogynist, due to the strict structure of patriarchy, and the norm of the community, being more important than the individual, along with the man being the provider, though this is changing in Korea, it is still taking its sweet time.

Korean societal norms are prominently influenced, by Confucianist ideologies. Which undeniably, are anti-women and sexist to the bone if one sees it from the feminist perspective while acknowledging the good parts the philosophy has to offer in general. Because at the end of the day, every idea and thought has its merits and faults. We have to accept that.

However, with the influence of ideas like capitalism or free market, liberal democracy, and freedom of speech, which is a result of close engagement between South Korea, and the United States of America ever since the Korean War (1950 - 53), it has dramatically changed the picture. But there is still a need to ensure that women in Korea can lead a fulfilling life while having the basic dignity they deserve as human beings. Just like the women globally, irrespective of the country they are from, race, religion, the language they speak, age, and so on.

With the booming popularity of Korean shows, movies, and music, more and more international attention is also going towards the not-so-good parts of the society, a very natural phenomenon, welcomed by some, uncomfortable for many. At this juncture, we will briefly look into how women’s movements and feminism manifest in South Korea.

In comparison to its western counterpart, feminism in South Korea took its roots quite recently and is also comparatively not strong in its momentum. Although the rate of its development is something we should appreciate, and as an enthusiast and supporter of gender equality, one will root for its more dominant, healthy, and impactful growth, which brings about a change for the better and not worse.

Even though there were political and legal mechanisms since the 1948 constitution to protect women and curb discrimination against them, but the perception of women being below men has been so strong in their culture, and just the formal acknowledgment and mechanisms are not enough. With rapid industrialization and economic development, the paradigm that existed in the traditional societal norms has been challenged, but, under this radical current, there are still underlying problems for women. The social and moral perspective of the problem is not discussed within the members of the society, as it is a “small” issue compared to the human rights issue in Korean society.

Issues like sexual harassment, poor working conditions, and lower pays for their labor have been discouraging women to enter the workspace and claim their space. Also, the beauty standards of Korean society are nearly too idealistic, people tend to take it so seriously and end up becoming so insecure about the way they look that they go under the knife and get some procedure done, or develop massive insecurity about themselves.

About the situation of the reversed Me Too movement, it not only reflects upon the dire need for open, free, fair, and healthy discussions regarding feminism. Especially concepts like femininity, masculinity in Korean society, with understanding the patterns of toxic masculinity and toxic patterns, of the so-called “feminists” - who do not deserve to be called feminists in the first place as they weren’t one from the very beginning. It also reflects just how deep and complex the whole gender dynamics is in Korean society, which does need adequate attention and the required change.