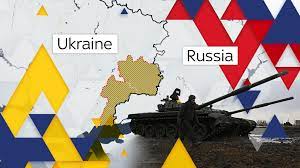 The president of Russia has announced that he ordered his country’s military to conduct a special operation in the Donbas region after the leaders of the breakaway republics asked Moscow for military assistance in response to what they claim is an increase in Ukrainian aggression.

In his nation address Vladimir Putin said, “by the Article 51 par 7 of the United Nations (UN) Charter, with the sanction of the Federal Council and in pursuance of the friendship treaties ratified by the Federal Assembly and mutual assistance with the Donetsk and Luhansk People’s Republic, I have decided to conduct a special military operation”.

Amid this, the European Union has responded to the Russia and Ukraine crisis by handing Russia sanctions. The United States president Joe Biden said in a tweet that “he will be meeting with the leaders of the G7, and the United States and our allies and partners will be imposing severe sanctions on Russia”.

In a press conference held in Brussels, Belgium, NATO secretary-general Jens Stoltenberg said that “NATO has no plans to send troops to Ukraine”. The secretary-general warned that the military alliance would defend every inch of its territory should Russia attack a member country.

The French president Emmanuel Macron says France and its European allies did everything to try to head off the attack on Ukraine. During his address on Thursday, He further said that “Russia’s attack is a turning point in European history and as a result, there will be profound consequences for our continent and changes in our lives”.

The government of Slovakia has authorized the deployment of up to 1,500 soldiers to help guard the border with Ukraine following Russia’s attack on Slovakia’s eastern neighbour. The Slovak government said, “Slovakia is also ready to open more border crossing with Ukraine if needed”.

Italian Premier Mario Draghi says Russia’s attack on Ukraine has made dialogue with Moscow impossible. He is demanding that Putin “immediately stop the bloodshed and withdraw military forces”.

The tension between Russia and Ukraine has built up a lot of steam with Ukraine closing its airspace to civilians.