Afghanistan, the war-torn country is making headlines and churning chaos around the world. Whatever peace was left in the country was disrupted just days after the U.S. Government pulled its troops out of the country. The withdrawal of the troops led the Islamist military organization Taliban who stuck around in hibernation to make its move and capture Afghanistan thus, raising concerns among world leaders. Visuals of thousands flocking the Kabul airport to flee the country flooded the internet compelling the world’s attention towards the state of anarchy. Taliban’s return to power possesses a grave threat to the women of the nation who faced several restrictions the last time they ruled. While the entire world hopes for a new dawn, a community of minorities pray silently to live another day. The Hazaras.

An ethnic Persian-speaking group, the Hazaras are concentrated mainly in the mountainous region called the Hazarajat in central Afghanistan. While the Pashtuns and the Tajiks constitute the majority of the population, the Hazaras were once the third largest ethnic majority. The Islam religion is divided into Shia and Suni who show cultural differences. The friction between the Shiites and the Sunni Muslims resulted in several religious violence and the Hazaras were one of the targets. Since time immemorial, the Hazaras are considered the most oppressed community in Afghanistan. The discrimination did not start with the Taliban. Historically, the Hazaras were persecuted post the second Anglo-Afghan war during the reign of Abdur Rahman Khan. The Afghan king was driven to bring the regions of Turkistan, Hazarajat, and Kafiristan under his control. However, resistance from the Hazaras led Shah Abdur to launch several crusades and campaigns in the Hazarajat. Thus, the uprising of the Hazaras against discrimination occurred during the years 1888–1893. But the aftermath was written in the blood and bones of the Hazaras.

The first uprising took place during the year 1888-1890. The Hazaras revolted against Abdur Rahman Khan who tried to extend his control over Hazarajat. When Emir Abdur Rahman's cousin, Mohammad Eshaq questioned the ruler and sought to overthrow him, the tribals of the Sheikh Ali Hazaras joined hands with him against Abdur. However, the Emir’s control over the majority of the Hazarajat region and his play to bring an internal tiff between the Shia and Sunni groups of the Sheikh Ali Hazaras helped him defeat the uprising. As a result, heavy taxes were imposed, villages were looted, lands were confiscated, and the local chiefs were imprisoned or executed.

In the spring of 1892, the wife of a Hazara chief was assaulted by one of the Afghan soldiers. The family killed the soldiers involved and a rebellion was sparked across the Hazarajat supported by other local tribal chiefs. Emir Abdur announced a “jihad” against the Shias and gathered an army of around 40,000 soldiers, 10,000 mounted troops, and 100,000 armed civilians which included the Pashtun nomads. With the support and the advice of the British, the great army defeated the rebellion in Oruzgan in 1892. The genocide of the Hazaras continued with the local population either displaced or massacred. Syed Askar Moulavi, a writer and a novelist from Afghanistan says,

"Hundreds and thousands of Hazara men, women, and children were sold in the markets of Kabul and Qandahar. Towers of human heads were carved from the crushed rebels as a sign of warning to others who might challenge the rule of the Amir." The third Hazara uprising was a repercussion of the heavy tax levied on the community during early 1893. The revolt caught fire when the Governor of Giza was arrested and killed by the Hazara tribal leaders. However, the forces of Abdur Rahman quashed the revolt and kept several leaders of the Hazaras like Muhammad, Karbala-i-Raza were held as hostages in Kabul. Though the Hazaras dragged the fight to the end of the year, eventually due to the scarcity of food and the armed forces of the Amir, they were defeated and displaced from their homeland. The aftermath of the third uprising resulted in massive, forced expulsion, land confiscation, massacre, rape, and murder of the Hazaras across Afghanistan. The notion of exterminating the Hazaras spread as the Amir launched a crackdown on the group. Decapitated Hazara heads hung in the city of Kabul, women were forced into sex slavery, raped, and murdered. Farmlands were forcefully confiscated and given to the Pashtuns. The number of the Hazara families was reduced by a staggering estimate of 60% during the rule of Abdur Rahman either displaced or massacred. The displaced families found refuge in the neighboring regions of Quetta in Pakistan and Mashhad in Iran. Once the third-largest ethnic group in Afghanistan, the Hazaras are now a minority finding ways to live as refugees outside their own country. However, the atrocities on the Hazaras did not end and were further pursued by the Taliban.

In the mid of 1990s, the Islamist military organization, the Taliban came into power in Afghanistan. With strict followers of the Sharia law, the Taliban waged a war against the Hazaras considering them as outsiders in their own country. One of the reports claims that the Taliban executed 15,000 Hazaras during a violent ethnic conflict. The 1997-1998 Battle of Mazar-i-Sharif took place between the allied forces of the Afghan Liberation Party, the Hazaras, Junbish-e Milli-Yi Islami-Yi Afghanistan, and the Taliban. Led by Abdul Malik Pahlawan, the battle was a part of the Afghan Civil war and under his leadership, 3,000 Taliban prisoners were massacred which the Hazaras were not part of. However, on May 19th, 1997, Malik abandoned the allied forces, negotiated with the Taliban, and jumped ships. The Taliban who had already declared a war against the Hazaras was now fuming at the massacre of the members of the organization. In May, Pakistan and the United Arab Emirates recognized the Taliban as the lawful government of Afghanistan. What followed was an act of ethnic cleansing and the persecution of the Hazaras which is compared to the Holocaust.

Further, in 1998, the Hazaras were slaughtered in the name of religious and ethnic differences. The Taliban entered the streets of Mazar-i-Sharif and fired at everything, killing men, women, children, and animals. A horrifying 8,000 people were killed in Mazar-i-Sharif and Bamiyan. Additionally, they restricted anyone from burying the bodies, left them to rot in the summer heat, and were reportedly eaten by stray dogs. In another extremity, the Taliban went to every Hazara household and either shot or slit the throats of the men of the house in front of their families. Mass murders took place in the year 2000 and 2001 in Robatak Pass and Bamiyan province killing 31 people and 170 men respectively. Rockets were launched over a local mosque which provided shelter to women, children, and old age people. The barbaric genocide left 20,000 Hazaras executed across the city.

“Hazaras are not Muslims, you can kill them.” 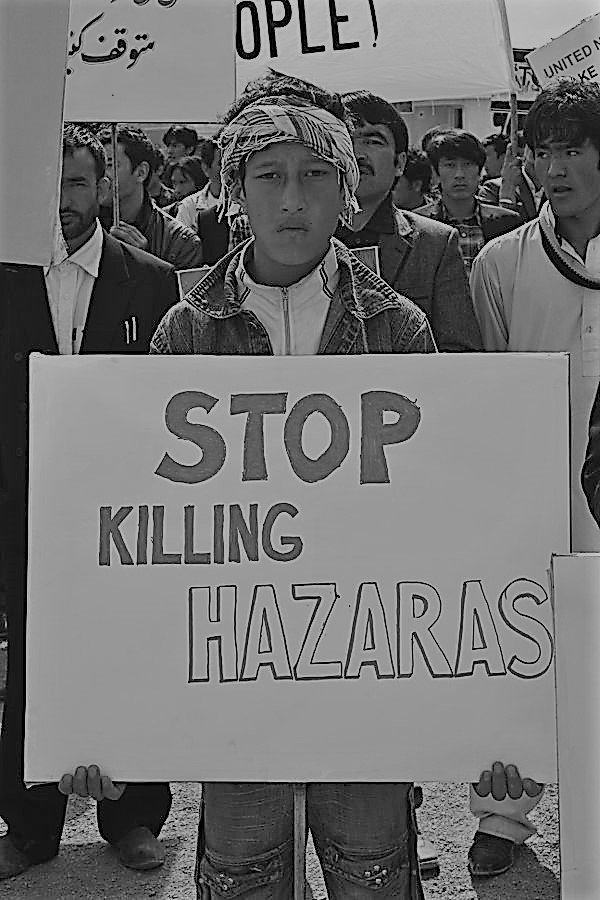 After the fall of the Taliban in the year 2001, the state of the Hazaras improved significantly. Under the Karzai administration, they were identified as an ethnic minority and were given the right to Afghan citizenship. They were given prominent positions in government as well as in politics and were allowed to pursue higher education. However, the threat to the Hazaras still loomed in the form of ISIS who are involved in violent killings against them. Furthermore, the Taliban continues to kidnap and murder Hazaras who are now constantly struggling to survive the discrimination. From 2010 to today, ISIS and the Taliban have carried out several attacks killing hundreds of Hazaras in the region. In 2010, the Taliban attacked and killed nine Hazara men in Khas Urozgan district. In 2015, seven Hazara civilians including four men, two women, and a 9-year-old girl’s throats were slit and later decapitated by a group of militants claiming their support to ISIS. In 2018, a university was bombed in the Hazara neighborhood killing 48 people. In March 2020, a mourning ceremony for the death of a Hazara leader, Abdul Ali Mazari, was disorganized by armed ISIS militants leaving 32 dead. Several such incidents took place in the Hazara-occupied provinces. Education centers were bombed, weddings were vandalized, and hospitals were attacked leaving dead bodies lying around including newborns. The motive behind the brutality of the Taliban was now backed by ISIS putting the lives of innocent Hazaras at grave risk.

Quetta, Baluchistan, Pakistan: During the Taliban era from 1996 to 2001, the Shi'ite Hazaras fled the country into Pakistan and Iran. Quetta being the primary residence of the Hazara refugees, it was considered a home away from home for the targeted community. With approximately 500,000 living in Quetta, the provincial capital of Baluchistan, the Hazaras searched for opportunities to secure their basic needs. However, the religious violence extended its claws in the name of Sunni extremist groups such as Lashkar-e-Jhangvi, Sipah-e-Sahaba, ISIS and now the ethnic minority was under the radar in Pakistan. The Hazaras were constantly persecuted and killed in many bombings and carnage from the year 2001 until today. The 2011 massacre left at least 1300 dead and the latest attack in 2021 led to the slaughter of 17 Hazaras working as miners. The main targets included women, children, and high-ranked members of the community. Considering the grave situation of the Hazaras, the Pakistan Government has placed military checkpoints and army personnel in the city of Quetta to safeguard the lives of the minority. As a part of the Hazara diaspora, the community is now scattered across the world in Australia, Pakistan, Iran, Mongolia, India, and the United States.

Today, the Taliban are back stronger as a legitimate Afghanistan Government by overpowering the military forces of the country. A cry for the residents and the future of the country is heard worldwide. The fear of pushing the country 20 years back in time hangs by a thread. Though the Taliban 2.0 claims to be more liberal, open, and inclusive, the world fears a history to repeat itself. With women being the targets in their previous rule, the Taliban’s Sharia law was implemented in the country which forbade the women from going out without a male companion, to learn in a co-educated school, meet men who are not family, etc. In their second term, the Sharia law may be back in place with more relaxation, claims the Taliban. But as time unfolds, the reality of the governance of the Taliban can be envisaged. 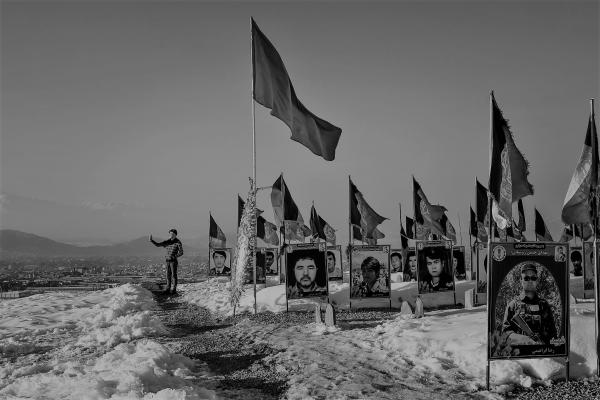 While women face the shackles of the Taliban, the ethnic group of Hazaras fears a dark fate unfolding in front of their eyes. In recent news, the statue of the Hazara leader Abdul Ali Mazari was demolished in the central Bamiyan province which led to the speculations of the ethnic rivalry between the Shi'ite Hazaras and the Sunni Taliban. A report from the witnesses stated that two Hazara Shia women in Herat, Afghanistan were publicly thrashed by the Taliban officials. Thousands of families who still live in Afghanistan are terrified at the rapid conquest and the recent developments by the Taliban. The Hazara community who found refuge in Australia during the 1990s fear the worst for their families who still live in Afghanistan. The refugees are seeking the local government’s help across the world to grant visas for those who are trapped and expedite the process. While the Hazaras spend sleepless nights in their homes, the Taliban are sharpening their knives to knock at the doors of the ethnic minority.