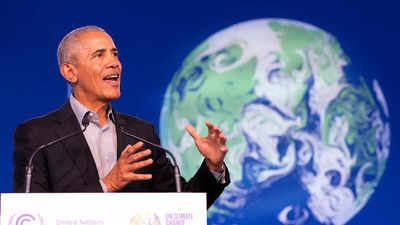 As countries,  both developed and developing are putting their best foot forward to tackle the global climate change crisis, former President of the United States Barack Obama who was one of the main draughtsmen of the Paris agreement back in 2015 named and shamed the leaders of China and Russia for their absence from such a pivotal conference in today’s dire situation. The former President also took a dig at Donald Trump for his unapologetic decision to withdraw the US from the Paris agreement during his tenure.

In his 22 minutes long speech, Obama highlighted that China and Russia are two of the biggest emitters of harmful and polluting gasses and wastes but still decided to opt-out from such a crucial summit that makes everyone aware of the catastrophic situation the world is in as well as lays out the itinerary for days to come. Obama was visibly ruffled by the situation as he went on to emphasize that it was a big shame for the global community as China and Russia declined to attend the summit. Xi Jinping and Vladimir Putin’s national agenda on the climate change issue so far has proven on and on that both the countries lack the sense of urgency and fear of the days to come as zero efforts have been made by them, added Obama.

On the Trump-era decision, Obama iterated that his predecessor’s decision to snub out from the Paris agreement was an extremely foolish one. During that time, many developing countries that were getting inspired by Obama’s footsteps on waging a war against climate change suddenly lost hope by Trump’s unanticipated decision. Many countries including UK and France blame the US for starting something so crucial involving every major country and deserting the bandwagon without any concrete reason. As a matter of fact, the Paris Agreement still gets a lot of heat and resentment from Republicans especially from GOP senator Ted Cruz. Obama however went on to assure that many state and local governments back home were moving forward despite the heat.

According to reports, Obama is still in Glasgow even after the summit ended, reportedly to give momentum to the world leaders to gang up and control the predicted 2-degree celsius rise in global temperature. Others are however of the view that the International Energy Analysis agency just put out flawed numbers for countries that are near impossible to follow. For example, Brazil is set to emit net-zero emissions by 2040 which is again flawed looking at its current trajectory of measures.

Though India has not yet put out any concrete goal for emissions, the country has announced a short-term plan till 2030, controlling emissions and targeting small measures to carry out long-term goals. Prime Minister Narendra Modi’s speech at COP26 iterated controlling targets on both economic development and climate change. Modi’s speech was strongly supported by Obama as he took to Twitter to thank Modi for his realistic vision to fight the climate change crisis.