Zelensky: Ukraine Will Not Give In To Russian Attacks 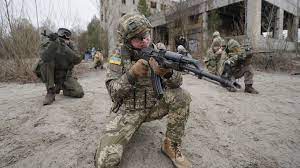 Volodymyr Zelenski, President of Ukraine, indicated that the Ukrainian army will fight tirelessly against the Russian army without giving up the country's territory in the claim. This statement is because the Ukrainian president himself notified that Russia has begun the battle for Donbas, indicative of an offensive strategic move to progressively control Ukrainian territory.

Zelensky also added that "a large part of the entire Russian army is now engaged in this offensive" alluding to the move by Donbas, emphasizing the staging of the Ukrainian soldiers who will not give up rest to defend their country.

These statements by the president were given after reports arrived registering the appearance of bombing throughout this Monday in Donbas. In turn, the regional governor of Lugansk notified the start of the offensive in Kreminna. Likewise, the governor indicated, through Telegram, that the situation has changed radically due to this move and that the streets seem "hell", referring to how agitated they are by the continuous attacks.

Until now, the offensive continues delayed by the defense of the Ukrainian army, and Zelensky does not intend to give his arm to twist in this fight that in a few days will reach two months.