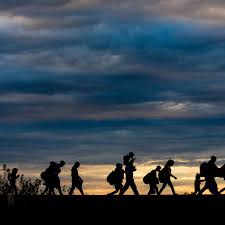 The declining economy in Zimbabwe and the demand for caregivers are leading numerous Zimbabweans to relocate to the UK as caregivers as of late.

Many publications have stated that since the advent of the Covid-19 pandemic, health sector jobs in the UK have been left vacant, hence the demand due to the deaths of many frontline workers.

According to News 24, in 2021, the state of the adult social care Sector and the workforce of England reported that about 105,000 vacancies for caregivers are advertised and posted daily. Therefore, leading a large number of Zimbabweans to move to the UK to provide these services.

The social talks interviewed a young lady who is also awaiting sponsorship from a UK citizen. "I'm on the waiting list as we speak. I have completed the theory and the practical training of the nurse aid course," she said.

She also told the social talks that she graduated with a degree in Development studies, but getting a job in Zimbabwe is a proving hardship, which is why going to the UK and becoming a caregiver is her second option.

"I heard the healthcare jobs in the UK pay more than most decent jobs in Zimbabwe and I also want to try my luck like many others," she added.

According to an article published by news24, since exemption permits for Zimbabweans in South Africa are nearly expiring, they will have to compel to leave the country, and with no choice going back home, they are looking to settle in the UK. It reports that this is because even with qualifications, they get little money there.

Another Zimbabwean who already works as a caregiver in the UK said, “I won't lie there is so much work here. I’m taking care of an old couple but it's better than being jobless back at home. I'm hoping I can find another job here but a job that is related to what I studied for when I was still in Zimbabwe."

News24 reports that caregivers in the UK work in clients' homes helping those with chronic illnesses or those living with disabilities. The average salary of a caregiver is about R227 per hour, way more than white-collar jobs in South Africa and Zimbabwe.

However, according to the Herald, not all that glitters is gold as they report that most Zimbabweans are suffering in the UK and some even become stranded once they get there, but some are still selling their homes and cars to acquire a Healthcare Visa.

In September 2022, ZIMSTAT reported that there are 23 166 Zimbabweans that are living in the UK. The report also stated that about 13.6% of all households previously surveyed in Zimbabwe had relatives outside the country.