A Guide to Working Through Procrastination 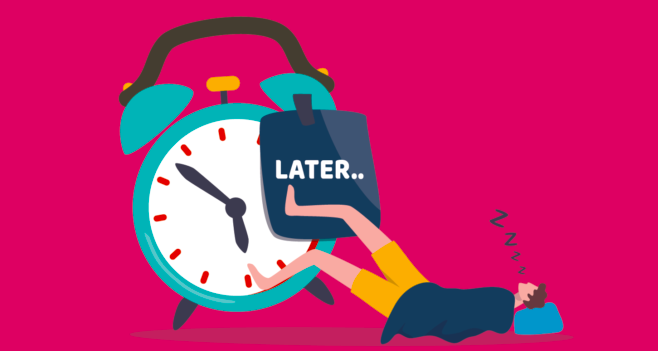 As I begin to write this, I must admit that I have been finding ways to procrastinate from actually getting started on writing this very blog post. As I should have sat down to start this, I decided I’d make a cup of tea and watch a bit of Netflix while I drank it; it would only be for 15 minutes, after all, and then I could concentrate on the blog…that was an hour ago. I think it’s fair to say that most of us know that feeling – suddenly, we’d instead do the washing up or even clean the entire house to avoid starting an essay. This is entirely normal, of course.

Before discussing various ways to overcome our desire for procrastination, firstly, I feel it’s important to understand why we procrastinate. It was initially thought that it was simply down to bad time management, which is still the opinion of many, including lots of universities, who continue to try to help students get over their procrastination using this consensus.

But, more and more top psychologists – like Tim Pychyl at Carleton University in Canada and Fuschia Sirois from the University of Sheffield in England – are concluding that procrastination occurs because of an inability to manage our mood/emotions. So when we’re confronted with a task we need to complete, it may induce negative emotions such as boredom, frustration, anxiety, self-doubt, etc.

Due to these bad feelings arising within us as we think about the task, we try to make ourselves feel better, perhaps by doing another thing that we count as ‘productive,’ such as changing our bedsheets or cleaning and rearranging our rooms. It’s a bit like the notion of instant gratification – you’re doing something that will make you happier in the short term but that you may regret in a long time.

This new theory for why we procrastinate certainly makes more sense than the traditional one if you think about it because if it were a time management issue that was occurring, it would suggest that we were never able to organise enough time around everything else we do to get our work done. But when we procrastinate, we actively use the time we have free for studying or completing a task to do anything but that. And the worst part is we know we’re doing it, but we can’t seem to help ourselves.

Of course, the vast, standout issue with leaving everything until the last minute is that it may well affect the quality of our work as we attempt to rush through it to meet our deadline. And on top of that, chronic procrastination will inevitably bring us far more stress and long-term negative emotions, such as self-blame, than if we just did the work when we were supposed to. Because it can cause long-term negative moods, in severe circumstances, it can affect mental and physical health and lead to chronic stress, psychological distress, low life satisfaction, depression, anxiety, unhealthy habits, chronic illness, and even hypertension and cardiovascular disease.

So, with all this in mind, how do we even begin to attempt to overcome procrastination? Given that we now understand that it is about emotions and not productivity and therefore has more of a deep-rooted psychological cause, it does make it much harder to get out of that mindset. But it’s not impossible – here are five things you can do to try to get your head into a more positive space and avoid distractions for when the time comes to do your work:

Possibly the most critical first step with something like this, as I’m sure a lot of psychologists would tell you, is to pin down the reason why you put off doing your work. This may require some deep introspection, which for many can be pretty tricky, but try your best to think about how you feel when you think about doing your work or a task you don’t want to do. What’s stopping you? Boredom, self-doubt, perfectionism, a general sense of anxiety…?  Usually, if you can figure out the ‘why’ of something, it can be the first step towards dealing with the problem and thinking of ways to solve it.

2. Be honest with yourself:

The problem with when we procrastinate is that we only think of the ‘here and now rather than the future (which, by the way, is an evolutionary phenomenon) because when we tend to think of our ‘future selves,’ we view ourselves more as strangers. Therefore the repercussions of procrastinating don’t seem so extreme to us in the present as we’re falling down a YouTube rabbit hole.

The key with this is to try to centre yourself and make sure you are present and aware, and then be honest with yourself – many people find that giving yourself a little pep talk in the mirror helps – and list all the negative consequences of leaving your work until a later date and why your excuses for procrastinating are just ‘excuses.’ This is much easier said than done, but keep trying it, and you might find it works for you.

An average psychological effect when you think that your essay has to be 3,000 words is to feel daunted and put off by it – ‘What on earth am I going to write even to reach this word count? I don’t know enough about this topic!’ is something you may immediately think. This thought probably pops into your head before you’ve even done any Google searches on your essay topic, therefore making self-doubt creep in, and you instantly feel like you need to procrastinate before you’ve researched and acquired further knowledge on the subject, after which you’d probably feel more comfortable about writing it.

To try and avoid this big freak-out, you need to try and reason about the situation first and plan out the steps, either in your head or – even more helpful – write them down for you to visualise. Structuring your work this way will help the task seem less daunting, primarily if you work on it section by section instead of sitting down to write one large chunk of it, which can be off-putting if you tend to procrastinate.

4. Get a good working environment:

Your working environment is critical. People work differently, so perhaps your optimum workspace involves relaxing music and candles, or maybe you prefer no music at all in a very still and quiet room. You must do your best to remove those distractions we’re all so fond of: Netflix, YouTube, Instagram, and Facebook. This may involve turning the internet off on your phone or having it out of reach. It may not be something you want to do, but this kind of self-control is necessary to avoid slipping into your procrastinative ways once again.

Due to the fact there is so much self-blame and guilt surrounding procrastination, the most crucial thing you must remember is to not feel bad about yourself for doing it and place it as a perfectly normal and expected thing to do.

It may surprise you how much forgiving yourself helps; in a study conducted in 2010 led by Michael Wohl; researchers found that students who forgave and weren’t too hard on themselves for procrastinating during their first exam went on to procrastinate less for their next exam. The researchers deemed this had the psychological effect of “allowing the individual to move past their maladaptive behaviour and focus on the upcoming examination without the burden of past acts.”

All in all, procrastination is an onerous burden to overcome, and you may try these tips the first few times to no avail. However, it is essential to keep attempting them until, hopefully, something clicks in your brain, and you can ease your procrastinative behaviours bit by bit. After all, it’ll make your life far easier in the long run – remember to give your future selves a thought now and again!