A Not-So-Grim Tour of Cemeteries 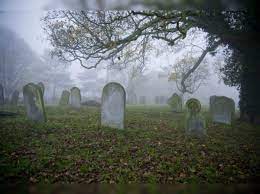 It is often said that the only fixture common to every life is death. Death has been associated with many emotions by people, for some like Virginia Woolf it is freedom from the cruelty of life, for some like JD Robb it's an opportunity of reunion or it can be the ultimate adventure (Potterheads know Dumbledore's words by heart, for the rest of you it's JK Rowling). The only palpable link of the dead to the living is through their remains. So most of us try to venerate our ancestors by having a proper funeral. At times that can be so grand that the cumulative life luxuries of the person look modest in comparison. As Anne Frank said, "Dead people receive more flowers than living ones because regret is stronger than gratitude."

How did burial become commonplace?

There have been several ways of parting with loved ones, some have retained popularity while others are present only in cults. In China, there was the tradition of leaving them in caves and annually decorating them to celebrate their legacy. In Mongolia, they were left on mountain tops to be devoured by wild animals focussing on the Vajrayana Buddhist thought of the futility of respecting a dead body. In Egypt, people took pains to prepare mummies by removing the digestive tract and then embalming the body in scented bandages. In areas of Africa, they were ritually cannibalised and the family members would eat the roasted body. In India, we have mostly stuck with cremation which remains the most popular option even today. Ironically the first known burials were likely for transgressors to exclude them from the usual honorary rites. This system later revealed certain benefits over other systems, first it protected the body from scavengers and also did not subject relatives to the not charming sight of decay. They could also bury ritual or practical objects and associate a particular area as a memory to the person.

The system of Community burials began in North Africa and South-Western Asia around 15000 years ago, simultaneous with the development of the permanent settlement. The largest mosque Wadi-al-salaam in Iraq has more than 5 million bodies buried in it. The nomadic Scythians littered the steppes with grave mounds known as kurgans while the Etruscans built expansive necropolis with grid-patterned streets lined with gold. In Rome subterranean catacombs housed both cremation urns and intact remains. The word cemetery means sleeping chamber and was coined by the Greeks. But the cemetery was not so infamous at the time as mediaeval churches also held fairs and other public activities in the place. Shepherds brought their cows to graze in graveyards as it was believed that grass grown on the dead made sweet milk ( unfortunately we would never know the veracity of this rumour but it's still creepy). As the industrial revolution unfolded, large urban cemeteries replaced the suburban cemeteries in villages like the 110 acre Pere Lachaise in Paris or the 72 acres Mt Auburn in Massachusetts. These were developed as lush gardens with ornate Rafael like sculptures with angels guarding the sleeping souls. People visited the cemetery not only for funerals but also for celebrating birthdays, anniversaries or random picnics (So if the movie Kapoor and Sons was made earlier, the venue of the date being a graveyard wouldn't have been that surprising). But by the late 19th century more botanical gardens and public parks appeared and the cemeteries lost visitors. Now cemeteries are often secluded places with rusting gates and solitary mourners like we see in movies today.

The future of burial

Populous cities like London, Hong Kong and New York are running out of burial space so the future of burial must be reconsidered. Even at places where land isn't so scarce, cemeteries occupy a space permanently which cannot be cultivated or developed. Traditional burial also uses metal for coffins and concrete for the grave head which is toxic and pollutes the soil and groundwater. In some countries, skyscrapers are used as vertical burials but it is still rare. So people are slowly turning towards cremation as the ashes which philosophically takes them back to the people, as the ashes can be buried or thrown in water bodies without harming them. There is also a trend of converting these ashes into a piece of jewellery so that in a way the person always stays with us. People can now have their remains shot into space or used to fertilise a tree. The first option can be very costly but the second one is gaining a crowd for its environmentally friendly approach. It begins with promession as the body freeze dries and pulverizes thus creating a powder that can be used as compost. There are also green burials that use caskets made of plant roots and jute, urns that can sprout trees and burial suits that grow mushrooms. Eternal reefs take this to the depth of the ocean using a mixture of ashes and cement to create marine habitat for sea life. So it is time we get a little creative with our choice of getting back to earth. Conventional methods are not the only choice and we must make our last act a striking one. As George Eliot said, "Our dead are never dead to us until we have forgotten them."