All about the Blue Beetle, the DC hero who's going to have a movie. 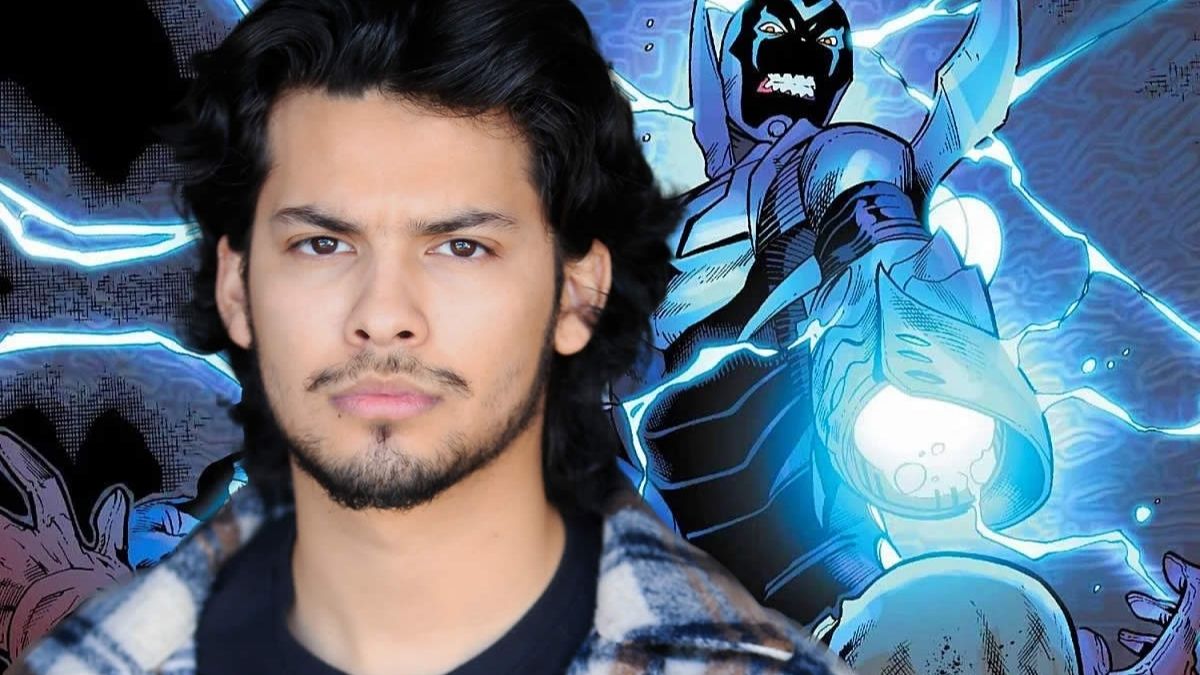 The Blue Beetle will be the first DC film that will feature Latin characters as protagonists. The hero named Jaime Reyes will be played by Xolo Maridueña. The actor is known for his role as Miguel in Cobra Kai. In addition, Brazilian actress Bruna Marquezine was also confirmed to work on the film. She's going to be Penny, the romantic superhero pair.

Bruna Marquezine also released a video of a conversation between her and the Puerto Rican director of the film, Angel Manuel Soto, and also with producer John Rickard. During the discussion, she discovers that she won the role to be Penny. The actress reacted with tears of joy and the video went viral on social networks.

Two other actors have already been confirmed to be in the DC film. One of them is actress Belissa Escobedo from American Horror Story. She will play Milagros, the younger sister of the Blue Beetle. Harvey Guillén of What We Do in the Shadows was also cast in the film. However, its role in production has not yet been disclosed.

Blue Beetle had its announcement made in 2018. The story was written by Mexican Gareth Dunnet-Alcocer. The screenwriter also recently worked on the new version of Scarface, but there is no release date yet. In all versions of the Blue Beetle comics, three people have already worn the hero's costume. In the DC movie, two of them will appear.

The DC hero first appeared in 1939. The comic book was called Mistery Men Comics 1 from Fox Comics. Although the name is similar, it has no relation to the film studio that was purchased by Disney in 2019. The Blue Beetle was created by Jack Kirby, the same creator of Captain America, Hulk, Thor, and several other characters.

The plot was quite common. During the day, Dan Garrett was a cop. But when night came he would turn the Blue Beetle and solve various crimes without the use of his badge. At first, he wore only one overcoat, a mask that covered his eyes, and a teapot. He later went on to wear a costume glued to his body. He gained superpowers because of a super vitamin.

The comic was very successful after its debut. The New York World's Fair in 1940 promoted "Blue Beetle Day" through Fox Comics. More than 100 children participated in a relay race that took place in the city of the United States of America (USA). The whole event was narrated over the radio. Also in 1940, the Blue Beetle received a series made by broadcasters with 13 episodes.

In the following decade, all fame collapsed because of a crisis in the comic book market. The reason was a rumor among adults who called the searchers as an influence for bad behavior among young people. As a means, comic book sales dropped significantly and many publishers went bankrupt. One of them was Fox Comics.

That's why the Blue Beetle was bought by another publisher, Charlton Comics. In 1966, the hero received a brand new version in Captain Atom's magazine. The character was Ted Kord, who is a rich and very intelligent young man who created an outfit and a machine similar to a beetle capable of flying.

A year later, Charlton Comics revealed through a comic book that Ted was a partner of Dan Garrett. However, the man was not a policeman but a very famous archaeologist. In the story, Ted's uncle fakes his own death to steal his nephew's technology to create an army. To fight him, Ted asks Dan for help. The archaeologist accepts the challenge but ends up being captured.

Dan tells his secret to Ted that he is the Blue Beetle and that he has received his powers from a mysterious beetle. The artifact was located while making an expedition through Egypt. Despite being able to escape and defeat Ted's uncle, the hero can't resist his injuries and dies. But before he dies, the archaeologist asks Ted to be the new Blue Beetle.

Blue Beetle arrived for DC Comics in 1980. His first appearance was in the great Saga Crisis on Infinite Earths in 1985. This comic became the basis for other comic books that influenced a reinvent of the DC Universe. Thus, he corrected confusing timelines and applied a large number of new characters.

In 1986, it was confirmed that Ted was a pupil of Dan Garret and that the scarab was of an ancient Egyptian god. To activate the powers, it is necessary to shout the phrase "Khaji Da!". Something similar to the power of another hero who does the same process only with the word "Shazam". Blue Beetle superpowers include enhanced force, flight, X-ray vision, and energy beam.

Ted Kord died in 2005. Back in 2006, the trio of comic artists Keith Giffen, John Rogers, and Cully Hamner created a replacement for the Blue Beetle. Jaime Reyes is a young descendant of a Mexican family who was from El Paso. The place is on the border of Texas in the United States of America (USA) with Mexico.

Jaime is a high school student. He's the son of a mechanic and a paramedical. Jaime finds the scarab while walking down the street with friends Brenda and Paco. Because of the beauty of the artifact and because it looks quite old, the boy takes the object home. There, the scarab comes to life and enters the boy's spine. After that, Jaime gains an almost impenetrable armor, an arsenal of weapons, super strength, energy control, and several other special abilities.

The young man also discovers that the scarab actually has an alien origin. The artifact was sent to our planet by a civilization called Reach. The goal of this group was to dominate the Earth. However, the scarab was the target of magic as soon as it arrived. That's why the object lost contact with Reach.

Jaime teamed up with another superhero known as the Golden Guardian. He then joined the Young Titans. In addition, he became for a time the pupil of the Peacemaker, who recently received his own series on HBO Max. The Blue Beetle has appeared several times in DC Comics animations. He also had a stake in the series Smallville last season. The hero reappeared in the comic book project called The New 52. But his work was canceled in 2013 after 17 editions.

Blue Beetle recordings are scheduled to begin soon. In addition, fans were surprised by the similarity between actor Xolo and the character Jaime. Another expectation is that the character Ted, the second Blue Beetle, will also appear in the film.

How is Satire helping in Covering the News?