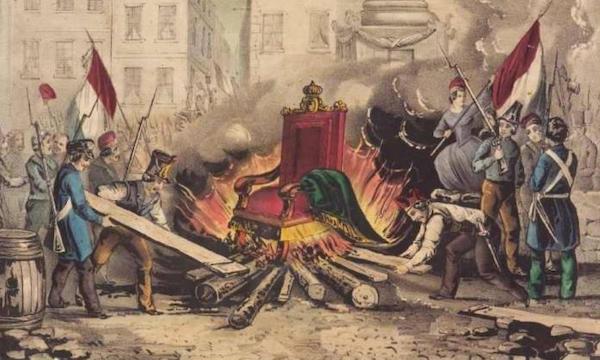 The French Revolution changed the world tremendously. In the past, regions were ruled by empires. Still, with the French Revolution, empires began to break up because the concept of nationalism created by the revolution had a significant impact on people. [1]. For example, the Greeks ruled by the Ottomans remembered their Greek identity and rebelled against the Ottomans. They wanted to be led by Greek rulers, not by Turks. [2]In addition, the revolution promoted the principle of equality.

People should be equal. Privileged classes such as the aristocrats had to be abolished. For example, many aristocrats were killed in France during and after the revolution. And some were forced to flee France. These concepts created by the French Revolution continued to influence Europe for a long time. For example, in 1830, an extraordinary uprising broke out in France. The king of France, Charles X, had to surrender, and a constitutional monarchy was established in France. There were also riots in many parts of Europe. For example, the Belgian kingdom was established thanks to the uprisings in Belgium. [3]

Furthermore, in 1848, uprisings broke out all over Europe. Uprisings of unprecedented magnitude swept across Europe. Conflicts broke out everywhere, from Romania to Paris. [4] This essay will examine how the 1848 revolutions were interpreted according to the Marxist, nationalist and liberal perspectives.

The 1848 revolutions have an important place in the history of Europe. These revolutions have deeply affected Europe politically and socially. There are several reasons for the formation of these revolutions. Firstly, Europe encountered a massive harvest crisis in 1839. Agricultural yields fell in many parts of Europe. Many fruits and vegetables and fields were damaged due to climatic problems. [5]In addition, diseases that spread in Ireland and some regions caused significant damage to agricultural production. Hundreds of thousands of people died, especially in Ireland. Large numbers of people immigrated to Australia and America.

In Ireland, farmers planted only one type of potato. [6]Therefore, the disease spread in a short time, reducing agricultural production drastically. Many parts of Europe were deeply affected by this agricultural crisis. For example, bread prices in Paris increased by 50% in 2 years. Many people had to struggle with the problem of hunger. [7]. Furthermore, many crises occurred in the international market before 1848. Firstly, a significant economic crisis happened in the USA in 1837. The USA economy multiplied in the 1830s and faced many problems in 1837. The economy had overheated, and the economy began to stumble due to the heavy silver supply.

A major crisis occurred due to the panic that spread to the market in a short time. [8]. Then, in 1847, there was a great crisis in England. At that time, heavy investments were made in the railway industry. However, these investments turned into a bubble. In a short time, this bubble burst. In England, the markets became quite unstable. In 1844, the Bank Charter Act was passed by England to stabilize the markets, but the law was repealed in 1847. The dangerous situation in the markets in England continued until 1855. [9]. Also, socially, Europe in the 1840s was quite unstable.

Due to the financial crisis and the harvest crisis, many families' budgets were terrible. People were barely able to meet their needs. In addition, the situation of the cities was quite bad due to the rapid urbanization that took place in the 19th century. The number of slums increased, and crime rates increased rapidly in these neighborhoods. [10]Charles Dickens described these destructive urbanization processes of the industrial revolution in his novels very well. [11]In addition, the conditions of the workers were also horrible. In many factories and mines, the workers worked for hours under bad conditions. Emile Zola Germinal' also wrote: "The mine never rested; day and night human insects were digging out the rock six hundred meters below the beetroot fields." [12]

There are several views regarding the revolutions of 1848. Firstly, Marxist scholars associate these revolutions with communism. For example, Karl Marx said that" a fight for preservation or destruction of the bourgeoise order; the first great battle...between the two classes that split modern society" [13]. Especially in the demonstrations in Paris, many artisans and workers participated. They fought with the soldiers at the front of the barricades because unemployment was a huge problem and workers' salaries were very low. [14]. In addition. However, although the number of workers has increased dramatically, they are still underrepresented politically in the parliament.

During the revolt, many agitated the artisans and workers. For example, Louis Blanc played a significant role in the actions in Paris. [15]Also, before 1848, there were uprisings by many workers and artisans in Europe. For example, the Luddites revolted in 1811. They, textile workers, had a substantial population. However, they risked losing their jobs because of newly invented machines in the textile industry. So, they rebelled and attacked many devices in the factories. [16]

Furthermore, many farmers revolted in many parts of Europe. For example, many peasants revolted in Hungary, Italy, and Poland. Their aim was the abolition of serfdom. In addition, the peasant revolts in the 19th century were generally due to economic reasons. For example, in 1804, Serbian peasants revolted against Ottoman rule, but their aim was not independence. The reasons for their revolt were economic factors and the unjust behavior of the local rulers. Thus, according to many Marxist scientists, the revolutions of 1848 occurred for class reasons. For years, workers, artisans, and peasants have rioted against the exploiters and lords. [17]Moreover, thanks to the revolutions of 1848, the working class also reached class consciousness.

He wrote articles in the newspaper praising the Hungarian race. Also, many rebels felt national feelings during the 1848 revolutions. For example, the Austrian-ruled Czechs began to write poems and articles praising the Czech race. They rediscovered the ancient Czech culture and realized they were different from Austria. At the time of their rebellion, the main reason for many rebels was Czech nationalism, not economic reasons. Also, a considerable rebellion broke out in Hungary.

The Hungarians wanted autonomy. They wanted to rule themselves, not the Austrians. [19] Namely, one of the reasons for the revolts in 1848 was the nationalist views. With the French Revolution, the concept of the nation emerged, and nations were trying to get to know themselves. In particular, races living under the control of empires are investigating their past. They wanted to be independent again as in the past and establish their state, so they rebelled.

Also, the revolutions of 1848 were closely linked to the idea of ​​liberalism. Many intellectuals participated in upheavals. For example, Baron Andrian-Warburg wrote several articles in Leipzig in 1842. He criticized the inefficient bureaucracy, censorship, and taxes in his writings. Also, Odilon Barrot was a lawyer in Paris. He was critical of many actions of the government. During the revolution, he organized a large number of workers and artisans. In addition, middle-class members also actively participated in the process.

In the 19th century, professionals such as doctors, journalists, and teachers made good money, but they were not sufficiently represented in the parliament. They were uncomfortable with the power of the aristocracy. In addition, there was a great deal of pressure on intellectuals, especially in Germany. Many writers and journalists were prosecuted for their writings. Because of these factors, many intellectuals participated in the revolutions in Germany. During the uprising, writers and journalists wrote extensively to organize actions and encourage revolutionaries. [20]Namely, many intellectuals participated in the 1848 revolutions because of liberal issues.

A Radical Rethinking of Empire: Ottoman State and Society during the Greek War of Independence (1821-1826)

Stansfeld, Hamer. The Currency Act of 1844, the Cause of the Panic of October 1847, and the Generator of Monetary Panic Periodically. London, 1854.

A Radical Rethinking of Empire: Ottoman State and Society during the Greek War of Independence (1821-1826)