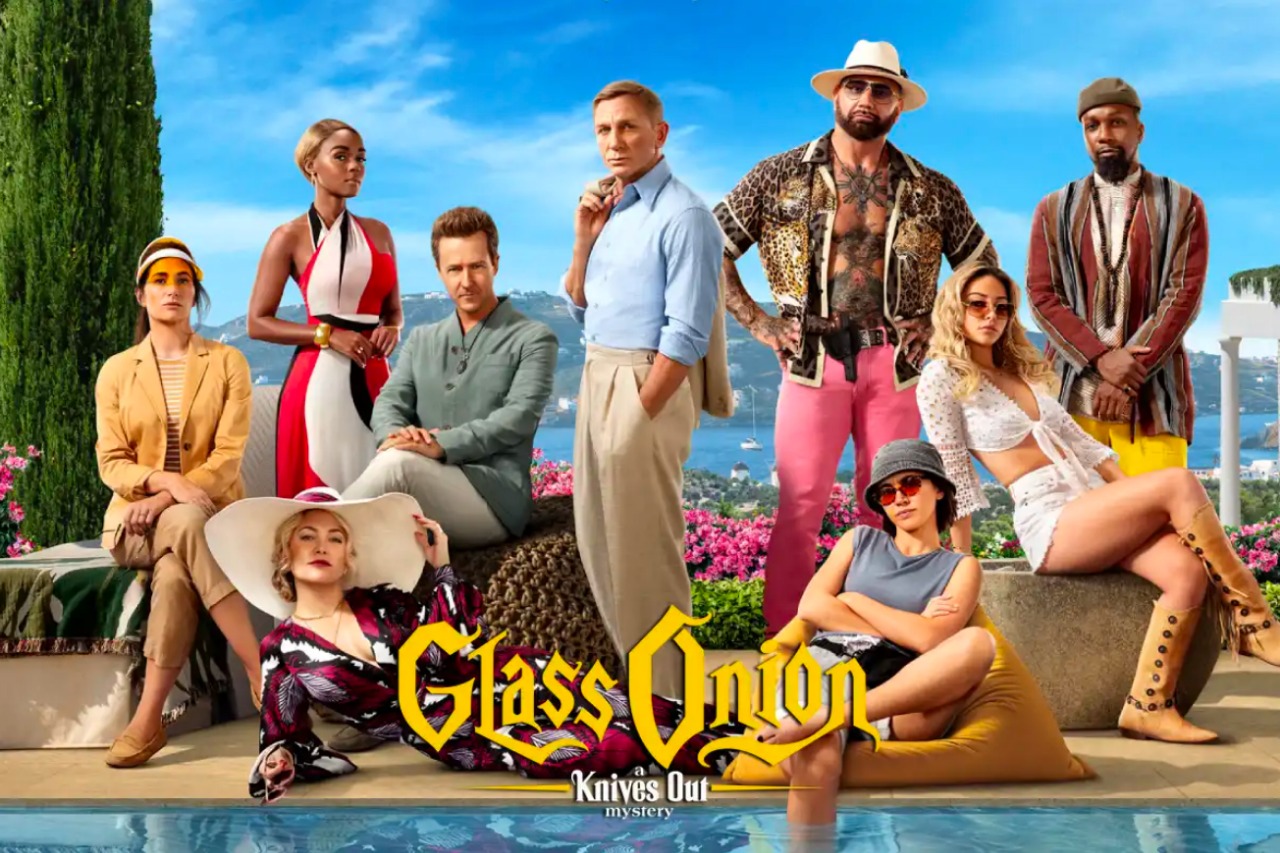 The Knives Out sequel is now streaming on Netflix, and this time detective Benoit Blanc is solving mysteries on a private Greek island.

Now that the latest Knives Out mystery is out and has done its rounds, it’s time to give it a deeper look. Or, look through the glass onion, as would say John Lennon, and see it for what it is; a parody.

Written and directed by Rian Johnson, the 2022 American mystery is a sequel to the 2019 Knives Out film, in which Daniel Craig stars as Benoit Blanc, a loquacious private eye who speaks with a Foghorn Leghorn style southern drawl. This time, he takes on a case involving a tech billionaire and his friends and is unsettled by what he finds.

The movie premiered on September 10, 2022, at the Toronto International Film Festival. It was followed by a limited one-week theatrical release on November 23, 2022, before streaming a month later on Netflix. Analogous to its predecessor, Glass Onion: A Knives Out Mystery received great critical acclaim, in which Johnson’s work was praised and named one of the top ten films of 2022.

Purposefully trivial and pretentious, the film drags on for nearly two and a half hours, filling the viewer with small insignificant details that, in the end, amount to nothing of actual meaning. However, this seems to be the point Johnson tries to make with the movie’s title. Similarly to John Lennon, Johnson references the British slang of the glass onion, mocking people’s habit of overanalyzing and dissecting the simplest pieces of information.

Between scandalous revelations of each character’s ties to Bron and the lack of creativity in everything the billionaire takes credit for, Blanc is shaken in the middle of clues that tug at him and pull him in different directions. Do these people want to save Miles, or do they want to kill him?

"His dock doesn’t float. His wonder fuel is a disaster. His grasp of disruption theory is remedial at best. He didn’t design the puzzle boxes. He didn’t write the mystery. Et voilà! It all adds up. The key to this entire case! And it was staring me right in the face. Like everyone, I assumed Miles Bron was a complicated genius. But why? Look into the clear center of this Glass Onion... Miles Bron is an idiot!" declares an enraged Blanc in the middle of revealing the truth of this mystery.

And beware, continue reading at your own risk because, yes, it all points to one person.

On the surface, the film seems to poke at the rich who, amid all the luxury and glamour, fail to realize that they, too, are human and that they, too, can suffer. But see, it is more than that. And maybe this is just falling into the trap of the glass onion, but it’s more than just the rich getting their well-deserved karma. It’s a portrait of the selfish and bland white man that Miles Bron represents.

Furthermore, with the ostentatious display of his extravagant possessions, such as a low-tide dock, luxury cars, and famous expensive artwork, Miles is the spitting image of the idiocy of the nouveau riche. For example, a well-placed detail is Mark Rothko's painting "Number 207 (Red over Dark Blue on Dark Gray)", which hangs upside down in Bron’s living room. Accordingly, as he makes up words ("inbreathe," "definite") and misuses others in his grandiose speeches ("reclamation," "infraction point," "circumspective"), his desperate effort to appear more intelligent than he is shows his true unintelligent nature.

“And that's... this is the infraction point. Because this is where you have to find it in yourself to keep going, will you break more things and bigger things and break the thing that nobody wants you to break”.

His shortsightedness and volatile ideas have proven dangerous for the rest of the world, but he continues to green-flag hazardous policies to inflate his ego. Likewise, all of his successful endeavors have been stolen from others, from hiring people to create the puzzle boxes that served as an invitation to the weekend to the utterly horrific act of betrayal against his Alpha business partner Andi Brand as well as the blatant plagiarism of Blanc’s idea to use the power outage as an opportunity for murder and the burning of the evidence only after Lionel, his right-hand man, questions why it still existed in the first place.

His constant need to flaunt his flamboyant luxuries also comes back to haunt him. The fact that he committed crimes in the light of day as if his wealth and good name would shield him from liability and that he openly discloses the secret to his complicated security system, in the end, turn out to be his downfall.

Glass Onion is a flashy and fun film that not only points at the self-centered and blundering rich but paints a portrait of one of the great agents of damnation when we give them power. Moreover, giving much honor to its name, it is a mockery of all entangled and overanalyzed without need. Certainly a film worth watching.