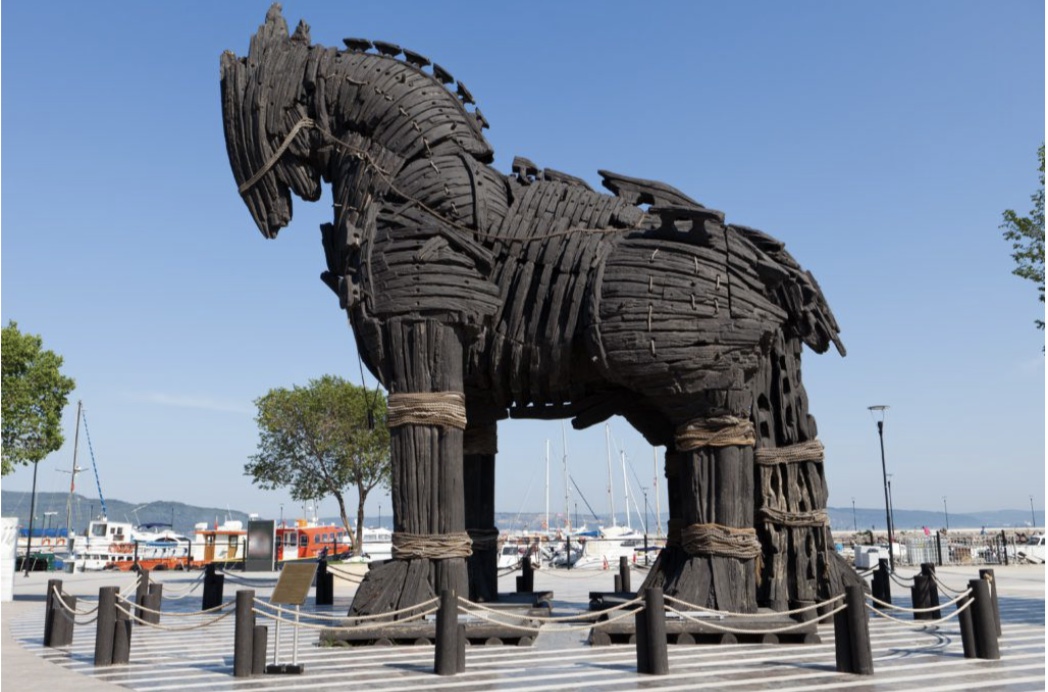 History has been full of deceptions and one such event changed the course of history, it has remained with us for centuries and likely to remain for time to  come – “Trojan Horse”. This article will discuss the ancient Greek War, its relevance in succeeding wars and times to come.

The story of the Bronze Age(Historical period that was characterized by the use of Bronze- 3000 B.C. -1200 B.C.) conflict which still holds ground in the modern era was between the kingdoms of Troy and Mycenaean, Greece. Since the 19th century after the rediscovery of the alleged site of Troy which is now in Western Turkey, archaeologists have uncovered many pieces of evidence of a kingdom that peaked and may have been destroyed around 1,180 BC.

The conflict started after the abduction of Queen Helen of Sparta by the Trojan Prince Paris. Helen’s husband Menelaus, filled with hatred, convinced his brother Agamemnon, King of Mycenae to take revenge. A huge fleet of more than 1000 ships sailed with great Greek Warriors like Achilles, Odysseus, Nestor and Ajax. The entire fleet voyaged across the Aegean sea to Asia Minor to lay siege to the Kingdom of Troy.

The siege lasted for almost 10 years with heavy casualties on both sides, until the morning the Greek armies retreated from their camps leaving a large wooden Horse outside the gates of Troy. The large wooden horse was built by Epeius, a master carpenter and pugilist. The Trojan king saw it as a symbol of victory and besides protesting against taking the structure inside the city, pulled the horse inside the heart of the city and celebrated their victory. Greek warriors were concealed inside the horse and during night time they opened the city gates making way for the Greek army and Troy fell that night in the hands of Greek, which is considered the biggest deception of its time.

Was it a Real War?

Most of the familiar episodes of the war, from the abduction of Queen Helen to the Trojan Horse and sacking of Troy come from the “Epic Cycle” of narratives assembled in the sixth century B.C. from older oral traditions.

Many portions of Trojan Horse epics are difficult to read historically and characters have resemblances to many Greek Gods.

Major excavation at the site of Troy started in 1870 under the supervision of German archaeologist Heinrich Schliemann which revealed a small citadel mound and layers of debris about 25 metres deep. Recent excavations have shown an inhabited area 10 times the size of citadel, making Troy a significant Bronze Age city.

The next level of Deception

Learning from Trojan Horse and other deceptive techniques, World War II witnessed one of the biggest deceptions of all time – “Operation Bodyguard”. The D-Day deception plan was codenamed ‘Operation Fortitude’ which was part of the overall deception strategy of Operation Bodyguard. Fortitude had two parts : Fortitude North for the deception that the Allies would attack on Norway and Fortitude South was designed to convince the Germans that an invasion could occur in Pas De Calais away from North-East Normandy.

The German forces were taking a heavy toll and was on the verge of exhaustion of all the available resources like Barbed Wires, Mines, Ammunition, Machine Guns post for securing the area around Pas De Calais but with all its efforts, the area was transformed to a fortress.

Allied air power played an important role by attacking various parts of Northern France to divert attention away from Normandy. In Operations ‘Taxable’ and ‘Glimmer’, the RAF dropped many dummy parachutists to simulate an airborne invasion and draw German Forces away from key objectives.

The Allied forces used inflatable Tanks and Inflatable vehicles to deceive the enemy and made them think that heavy artillery had gathered to attack Pas De Calais. The Allied deception strategy helped them capture Normandy which was the turning point in WWII.