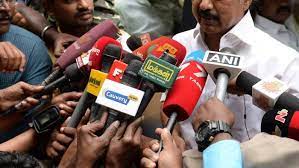 Media has a significant effect on our society. Because of its importance in molding public opinion, the media is also regarded as the fourth pillar of democracy. In today's ultra-modern society, the function of media is becoming increasingly important. It has been acting as India's watchful watchdog. Newspapers play a critical part in the functioning of any democracy throughout the world, not just India's. They are critical not just for informing the public, but also for forming a well-balanced public opinion. However, in recent years, the media has received a lot of criticism for how they have ignored their obligations to their responsibilities, and we can't say that this isn't true because the credibility of Indian media has declined over time, and will continue to do so until something is done to put a stop to it.

Journalism and media are some of India's oldest and most prestigious professions. When we talk about media, Journalists always come into the picture because without them, media is nothing. In a country like ours, journalists are no less than demi-Gods who utter nothing but the truth in this nation, where watching and reading the news regularly is something that is followed by more than half of us but in today’s era, journalism, a field which should be the most crucial one is the one which is facing a downfall.

More than 50 journalists have been killed in India in the past 15 years. Most of them weren't even at fault; the only mistake they made was attempting to expose the reality of a powerful politician or go against the system. Journalists in India are being targeted both online and on the ground. Those who dare to criticize Prime Minister Narendra Modi's Hindu nationalist beliefs on the internet are labeled "anti-Indian" and who promote them are considered partial. Many attacks on journalists just go unreported, as reporters often succumb to threats from local politicians, policemen, and self-appointed vigilantes and that is the main problem here.

The media of today seems like it has been divided into two – One which is on the side of the government and one which promotes hate against the. And the ones are between who try to tell the truth are so few that their voices are not heard by us mostly. Journalists who side with the truth have also been assaulted, jailed, and forced to quit for reporting on the government or other controversial subjects.

What is Media Bias?

The prejudice or perceived bias of journalists and news organizations in the media is referred to as media bias. It usually refers to a broad prejudice that influences the quality of journalism, rather than bias in one journalist's or article's perspective. Media bias may impact the events and stories that are published, as well as the perspective from which they are written and the language used to convey them.

In certain nations, media bias might go so far as to mirror the government's beliefs fully. Although most of the media contains unconscious bias, where journalists may face real barriers to neutrality such as a lack of access to all data, the media also contains intentional prejudice regularly. This is when media outlets purposefully strive to portray an event, group, or people in a certain light to accomplish a specific result. This outcome might be motivated by politics or just a desire to generate more money.

Recognizing bias media can be easy if only one remembers to check whether the sources used are credible or not and from what and whose perspective, the news is written, and whether it is showing the whole story or just one side of it.

Today's Indian media is more obsessed with TRP numbers than with truth. It has turned, twisted, and molded stories in ways they wanted us to see and not what they were. They continue to focus on petty issues and exaggerate their significance. When a well-known figure is seen somewhere or with someone, people associate it with something entirely different. This is exactly what the media is doing these days. When you turn on the news, you'll see that important issues like LGBTQ issues, India's efforts to solve the climate crisis, and migrant workers who have lost everything as a consequence of the pandemic are not covered. Rather, some channels show entertainment news as well as live images of celebrities leaving and entering airports.

News outlets exaggerate every piece of information and present it as breaking news. Everything is sensationalized for the sake of TRP numbers. Many news stations are turning to paid news to make more money, and they are influencing people. This tendency is on the increase, particularly around election season, and it is leading to a loss of confidence in news outlets. Some political parties have their news stations. As a result, skewed news is broadcast to sway voters. Under fear, enticement, or manipulation, today's media is not only crawling under but blindly obeying the disseminating official narratives. Not just the proprietors, but the majority of the journalists have toed the line, either out of necessity or voluntarily.

Shouldn’t the focus of journalism and media, in general, be to disseminate knowledge to keep everyone informed about what's going on and to make the world a better place? And not intruding into people's private lives?

In our world, no one is flawless, even the media. We are not criticizing the media; rather, we believe that there is still much room for development for the media to meet the goals of the people for whom it is intended. Without active and unbiased media, we can't imagine a democracy. In a democracy, the media acts as a watchdog while keeping the government active as well as strong.

It has evolved from only being a source of information to become an important part of our everyday life. Over time, it has developed into a more responsible and mature organization. The current media revolution has aided people in making educated decisions, and this has the potential to usher in a new age in our nation, but it is possible only if, the media is honest to us and to itself.