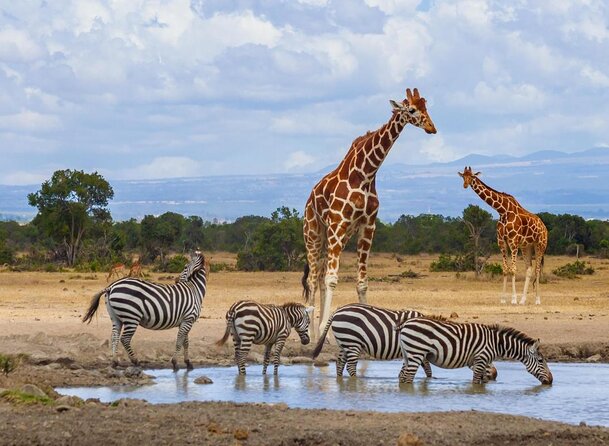 Growing up I was fortunate to have had plenty of holidays in Kenya thanks to the fact that my grandma lives there. But my most recent trip to the country with my parents was the best one I’ve ever been on; now a young adult and a budding journalist, I took in every detail and what we saw and it was quite amazing. Here is my account of a country I think deserves to be championed more for its conservation work and beautiful wildlife.

Our quaint little cottage in Fairmont Mount Kenya Safari Club was made up of two bedrooms and a sitting room. It was one of many situated around an enormous, lush green garden, where all types of birds came to play. There were over a dozen marabou storks hanging around when we arrived and, shortly after, when one of the gardeners came onto the grass to put food down for them, helmeted guinea fowl, ducks, peacocks, sacred ibis, crowned cranes and a hooded vulture also joined in with the party.

There were many activities to choose from at the resort, including horse riding, golf, croquet, table tennis and swimming. We were only staying there for one night and didn’t have much time on our hands, so we decided to check out the animal orphanage, which was only a few minutes’ walk away.

Most of the animals at the orphanage were very young and grew up with human contact, which meant we got to stroke a baby buffalo and a warthog (whom I nicknamed Pumbaa), feed a few of the monkeys, and I got to sit on a llama and a giant tortoise.

Towards the end of our tour of the place, the timid baby zebra we had seen being let out earlier suddenly appeared in the middle of a group of running llamas, as he was trying to outfox the keepers who were attempting to put him back into his enclosure. You could almost see the mischievous grin on his young, striped face. It was a sign of how much the animals enjoyed being at the orphanage and the progress that is clearly being made to rehabilitate these beautiful creatures successfully.

The keeper who showed us around was known as “The Elephant Man.” Our jaws dropped as he told us the unbelievable and stomach-churning story of how he acquired this nickname. He even had the scars to prove it. Many years ago, he was attacked by a bull elephant, who sunk his tusks into his side and stomach and, as he managed to crawl to safety under a log, his innards actually spilled out into his hands. Two major operations – each six hours long – were needed to fix him up. “Thank God. It’s a miracle I survived,” he said.

We ended up spending a good two hours at the orphanage so by the time we got back it was already quite late in the day. There is a maze in the garden of the resort, for which you can sometimes borrow a couple of on-site Labrador Retrievers to guide you through it, as they can easily sniff their way out of there.

Unfortunately for us, the dogs were having their dinner by the time we arrived to try and collect them. We continued into the maze, nonetheless, which ended up being disappointingly simple to get out of; all of the hedges were thinned out and cut at the bottom so we could see straight through. It was still entertaining, though, as we wondered whether there had been people who had genuinely gotten trapped before and had injured their pride as they sheepishly cried out for help from within the shrubs.

The following morning, we hit the road again. This time the journey was only an hour long, to a place called Sweetwaters Serena Camp, which was situated within the Ol Pejeta conservancy.

We arrived completely unaware of quite how blissfully breathtaking the next two days would be for us.

The glamping tents that guests stayed in were situated in a half circle around an opening of wilderness, with the main building area in the middle being just metres away from a watering hole and mineral lick, where animals come to lap up both the water and salt from the earth. Between the camp and this patch of land was a ditch containing a small electric fence to stop the animals coming across. I certainly had no idea that we would be quite this close to the wildlife that wandered around the conservancy, which spans across 90,000 acres.

Shortly after we got there, the entertainment started to arrive one by one for our stunned eyes to see. Over the next couple of days, we stood just metres away from white and black rhinos, elephants, giraffes, zebras, buffalos, several different types of antelopes, and a resident marabou stork, all without even leaving the camp itself. We did go on two safaris, once at night and once very early in the morning, but they weren’t worth the money we paid; we saw so much more for no extra cost simply by sitting and watching from outside our tent.

Everything just seemed to converge around the body of water. A sense of inner peace and happiness came over me as I marvelled at the sight before me. We were so lucky to be witnessing this. It wasn’t even vaguely comparable to seeing animals locked away behind bars in a zoo. Here they were free, wild and able to roam naturally. Something about being so close to that brought about such a sense of privilege and fascination.

Despite the 24-hour show unfolding outside our tent, we still managed to pull ourselves away from the camp. We visited the chimpanzee sanctuary on our first day there. It first opened in 1993 and, although chimps are not native to Kenya, it aims to provide a safe refuge for them after they have been rescued from many different places throughout the world. The keeper who showed us around told us how so many chimps are abused on the black market, torn away from their families and sold as bush meat or as pets when they are babies until they grow up and no one wants them anymore.

Humans share 98.6% of genetic DNA with chimps and our guide explained how emotionally alike they are to us. When they are taken away from their families at such a young age and placed in solitary confinement, as most of these mistreated chimps are, it causes serious psychological damage. A heart-breaking image on the wall at the start of our tour showed two young pet chimps in nappies after being rescued, hugging each other with despair and sorrow written all over their faces, sharing their grief with one another.

Even long-term, perpetual psychological damage can be caused by the abuse, as we saw with a chimp called Max. According to our guide, he spent his first few years with a French film crew kept in a cage and was brought to the sanctuary in 1990. However, even now, he struggles socially and prefers to be solitary, and can sometimes get aggressive when he sees human visitors, throwing rocks at them.

On the second day of our stay in the conservancy, me and my parents went on what was the most exhilarating horse ride we have ever been on. We went riding within a smaller section of the conservancy which has a fenced off perimeter, as it contains the only two remaining northern white rhinos in existence within its walls, both of which are females. The last male northern white rhino, Sudan, sadly passed away last year.

However, Samson, our riding guide, told us that scientists from around the world have been desperately trying to come up with a way to ensure that this species of rhino doesn’t become extinct. They froze Sudan’s sperm and wanted to try and extract the eggs of the northern white rhino females – because neither of them can actually bear a calf – to then combine them and implant the resulting embryo into a southern white rhino female.

We were given three gorgeous, dark brown horses to ride. Mine was only nine years old and was quite eager, always wanting to be at the front. We rode amongst the rhinos, as well as impala, buffalos and warthogs. It was such a surreal, incredible experience to be out in the open with these wild beasts with no barriers between us. It was also a little bit nerve-wracking, especially as the rhinos looked up at us with stern faces as we got close to them, as if warning us not to come any nearer.

After the ride, we got to meet Barack, the blind back rhino. We were allowed to feed and touch him. He lost one eye in a fight and developed a cataract in his other, subsequently losing his sight because of it. He probably wouldn’t have survived out in the wild, so he is now in safe hands at the conservancy.

The work being done in these kinds of places captured the true essence of Kenya for me – from the people, to the animals, to the landscape. It encapsulated all of the positives in a country that suffers from many serious issues, showing us that the bad aspects don’t necessarily have to overshadow the good being done.

Plastic Pollution: What Is To Be Done?