LGBT Iraqis are still at risk 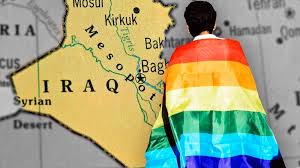 Homosexuality is forbidden in Iraq according to the law and religious authorities. Because of this, LGBTQ people live in constant fear.

Since the 2000 death squad campaigns have been carried out by religious leaders and political parties such as the Badr Organisation. These kinds of actions were egitimized by the Iraqi Constitution in 2005. The document established Islam as the foundation of the law and limits various civil liberties due to public morality.

Since the U.S’. withdrawal from Iraq, physical and sexual violence against homosexuals has increased in Iraq because of the growing power of the police and militias. When the Islamic State of Iraq and Levant seized power in North West Iraq, hundreds of people were sentenced to death, tortured and subjugated to other kinds of violence because of their sexual orientation.

Recent protests have led some members of Iraq’s LGBTQ community to play a more prominent role in this social mobilization. Over the last year, the anti- government protests have provided queer Iraqis with an opportunity to express their resentment to a conservative Iraqi society.

"I had announced my sexual identity among my friends in Tahrir Square and demanded they speak about LGBT rights during the protests (...) This caused me problems, including threats by militias (...) so I left the protests for several days, but I returned to Tahrir Square because there was no safe place for me."

Safaa, 29-year-old communications engineer originally from the city of Nasiriya, said “As an LGBT person in an Islamic country that kills gays, I refused to participate in the protests, but the young men who were being killed by militia snipers are the biggest incentive to join the protesters (...). I feel guilty over the blood of those who were killed. At the same time, I know that there are individuals in the protests where, if they knew I was gay, I would be at risk of being killed. Even if I escape from security forces, there will be other bullets that could lodge in my head."

One 31-year-old transgender woman, "Khadija", described how she was brutally attacked after being stopped by half a dozen men in a Hummer vehicle. One transgender woman told the BBC, "They kicked and punched and slapped me all over my head and body. They told me to get up and threw me in a garbage bin (…). I lay down on the garbage and they pulled out a razor blade and a screwdriver and poked and cut me all over, especially my bottom], crotch, and thighs." In the statement she is referring to a Shia-led paramilitary unit which officially became part of the Popular Mobilization Forces within Iraqi armed forces in 2018.

As emerged from the last report by Human Rights Watch (HRW), queer Iraqi citizens are at risk of abductions, extrajudicial killings, sexual violence, and gang rape by Iraqi police and armed groups.

LGBTB activists have much to say about Iraq. Various associations are actively involved in supporting LGBT people and raising awareness around homosexuality in Iraqi society. Among them are Seefar and Iraqueer. The latter one provides education, advocacy, and direct services. Moreover, it has submitted several reports to international organizations, such as the United Nations, about the living conditions of LGBT people in Iraq.