MANUAL SCAVENGING – The gap in technology 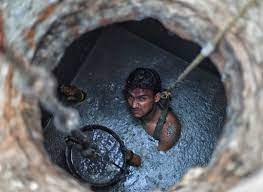 In times when people have reached Mars and are planning to make colonies on the moon, there is a section of society that has to step down into sewers, without any gear, to clean them. This gap in technology seems too unrealistic but is very true.

Manual scavenging is the practice where people clean, carry and dispose of raw and untreated human excreta manually in an unsanitary latrine, open drain, sewer, septic tank, or pit. The people who have to do this kind of work are called manual scavengers. They use hand tools like brooms, shovels, and tin plates to move the excreta and buckets to carry them for disposal. In some cases, the disposal place is kilometres away. They have no facility of personal protective equipment, gears, or tools. This practice is most prevalent in India, Bangladesh, and Pakistan. The International Labour Organization identifies three kinds of manual scavenging practices in India, viz., removal of human excreta from public streets and dry latrines, cleaning septic tanks, and cleaning gutters and sewers.

In India, this practice is also intrinsically related to class distinctions. All kinds of cleaning and polluting jobs are assigned to people from lower caste and strata of the society. The dehumanizing work of manual scavenging is also carried out by people from lower castes, especially Dalits and others on lower pedestals in the social hierarchy. The practice incorporates gender divisions as well. Women generally do the work of cleaning dry toilets as well as disposing of the waste. Whereas men are entrusted with cleaning septic tanks and sewers. This distinction is based on the economic value associated with the work. As people are hired and paid by the government to clean sewers and septic tanks, these jobs are done by men. Whereas, the job of cleaning private toilets pays less and hence is done by women.

In 1993, construction of dry toilets and employment of humans to clean such toilets was banned under the 'The Employment of manual scavengers and construction of dry latrines (Prohibition) Act. In 2013, the law was further extended to ban the use of human labour for direct cleaning of sewers, ditches, pits, and septic tanks. This was the 'Prohibition of employment as manual scavengers and their rehabilitation Act' or 'M.S. Act'. However, these laws have had negligible effect. This disgusting practise is still followed in states like Maharashtra, Rajasthan, Gujarat, Tripura, Karnataka, Uttar Pradesh, and Madhya Pradesh. The Socio-Economic Caste census in 2011 reported around 1 lakh 80 thousand households to be involved in manual scavenging for a livelihood. According to the Census of India in 2011, around 7 lakh 94 thousand cases of manual scavenging were recorded in India. The Supreme Court of India declared in 2014 that 96 lakhs dry latrines were being manually cleaned. However, the number of manual scavengers was around 7 lakhs. Another estimate in 2018 put the number of manual scavengers at around one million, with 90% of them being women. They also stated this number as "unknown and declining". Another estimate had put the number of sanitation workers in the country at 5 million, with 50% of them being women.

The practise of manual scavenging is so unsafe and risky that people associated with this work have often reported health issues. Respiratory diseases, typhoid, hepatitis, meningitis, and cholera are the common diseases among manual scavengers. Prolonged exposure to pollution can also cause skin, blood, and eye infections, lifting heavy weight causes skeletal disorders, and exposure and contact with the hazardous chemicals mixed with the waste causes burns. Asphyxiation due to poisonous gases is also a common hazard. These manual scavengers have no availability of protective gear whatsoever. That becomes a major factor in defining the risks. Accidents also occur during the process of cleaning sewers and septic tanks, majorly due to burning a lamp in a sewer or tank full of methane gas. The Safai Karamchari Andolan (2017-18) also found out the average age of a manual scavenger to be just 32 years. 1,013 people lost their lives while working as manual scavengers from 1993-2020. FIRs were filed in just 462 of these cases out of which 418 only came under section 304 (death by negligence) of the Indian Penal Code, 1860. The cause of death reported for 44 of these cases was just an accident. Only 37 FIRs, or less than 1%, invoked the Prohibition of Employment as Manual Scavengers and their Rehabilitation Act. Around 472 people have lost their lives to manual scavenging only between 2016 and 2020.

Apart from health risks, a huge amount of social pressure and discrimination is also associated with the practice of manual scavenging. First of all, this work is only given to lower caste people who are already discriminated against in society. The manual scavengers are looked down upon, insulted, humiliated, and treated as untouchables. At the same time, they are pressurized a lot to do the job if they even think of leaving this practice. They are not entitled to a single day's leave. If they skip work anytime due to some reason, they are threatened and extorted by the dominating upper class and caste groups.

The World Health Organization (WHO) stated "weak legal protection and lack of enforcement" of the laws, as well as the poor financial status of sanitation workers, contributes to the practice still prevailing.", in a study in 2019. The study was jointly authored by the World Health Organization (WHO), International Labour Organization (ILO), and WaterAid. The study also pointed out that the sanitation workers were poorly and irregularly paid. Also, in many cases, they were subject to extortion and were only paid for leftover food or basic food products.

In a country launching successful satellites on missions to Mars, how difficult would it be to create simple machines for cleaning sewers and septic tanks? Yet, these machines are not to be seen. 'Prohibition of employment as Manual Scavengers and their Rehabilitation (Amendment) Bill, 2020, called for complete mechanization of cleaning sewers and septic tanks. In some states, where these machines were even introduced sometime back, they are not in prevalent use. The use of such machines is even compromised by narrow lanes and poorly designed sewers and septic tanks. The practice continues today with the same density and people continue to die in this dehumanizing practice. The government is comfortable in ignoring such cases and upper-caste society is satisfied in getting their dirty work done by underprivileged people. Lots of activists have been fighting for this and lots of articles have been written about manual scavenging but the state and its citizens still succeed in ignoring such a serious issue. It's high time people look beyond their selfish needs and stop this disgusting and dehumanizing practice.