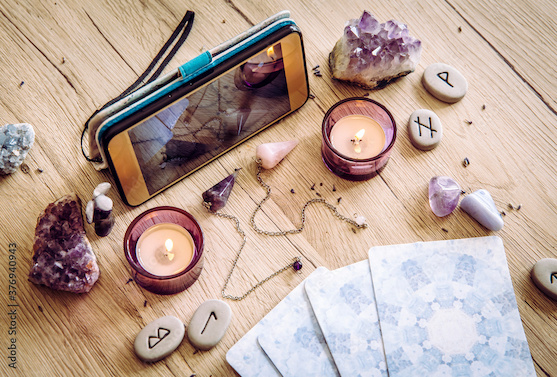 With Halloween on the horizon, the issue of inappropriate costumes disrespecting people’s cultures or beliefs can rear its ugly head.

The same can be said for Witchcraft, the modern-day practice of belief that has picked up since 2020, especially on social media platforms like TikTok, which according to a BBC article on one local witch, famous on TikTok, Witch in the Wilderness, aka Alya Skinner.

The Hashtag #Witch has as received nearly twenty billion views, #WitchTok has almost two billion views, and #BabyWitch, a hashtag for those new to the craft, has more than six hundred million views.

“Witchcraft, paganism, it all gives you a bit of control back; you can live your life how you want."

“I live my life magically; I do magic every day. It gives people a real sense of individuality and the power to do things themselves,” She believes that making the craft more accessible on social media has added to its popularity.

“Witchcraft years ago, you had to find a coven and get initiated and trained. Now you can go to your local bookstore and grab a witchcraft book or book about crystals,” she says.

“TikTok has changed the way we practise witchcraft; it's so acceptable now to learn from social media.”

Witches like Tonks Brown in Scotland are proud of who they are, how they live, and their chosen practice.

Frankie Castanea, an Italian-American folk witch, known as Chaotic Witch Aunt on the platform, also had an opinion on the accessibility of the craft.

“Witchcraft in different cultures has different connotations. Witchcraft is not a religion; it's a belief, it's a spiritual practice.”

“The term 'witch' is one people elect to use themselves. It's so broad and encompasses so many traditions. Witchcraft can have connotations of the dark arts. Still, Ayla believes magic can be “quite misunderstood”.

Tonks Brown, who is also a worker for the emergency services, also regards the witch trials of the past as nothing but hearsay and hysteria.

She says she has learned not to preach about Paganism but will stand up for witches in her day-to-day life.

Tonks, who previously worked as a tour guide for the City of The Dead Tours in Edinburgh, says she has worked in councils, the police and the ambulance service, but her Paganism is not usually an issue.

"Unfortunately, (in the past) lots of witches tend to be women, women who had knowledge, midwives and herbalists," she says.

"So they thought in the past we must kill her because we can't have a woman with knowledge."

Historically, the hysteria of anti-witch crusades in Britain ended with many being tortured or murdered for appearances such as having sharp noses, being elderly, or having lumps on their faces like warts.

The ways of telling if someone was a witch became almost hysterical, looking for weird behaviours and led to many suspicious people, often watching the people in their towns for any clue of witchcraft.

Unsurprisingly, he was a failed lawyer, his trying method was poking lumps, called ‘Devil’s Marks’, which could have been risen bites from fleas or flies, even moles or warts, but if they felt no pain, he would declare the person a Witch or Wizard.

The catch was that his ‘needle’ was a three-inch long spike which retracted into the spring-loaded handle, so it never drew any blood, and whoever he assaulted it with never felt it.

This is mainly why the stereotypical witch costume is considered offensive since the warty face and the elderly look are ingrained into the stereotype.

He had people hung, drowned to death or burnt, with nineteen people hung in one day and sixty-eight put to death in one village in England alone.

How witches were buried varied- Their bodies could be smashed with rocks in places to hide them or chained up in coffins that could also be chained and buried deeper, something that stemmed from the fear of Vampires also, albeit they always had stones or garlic stuffed into the skull, usually removed from the body and then buried in chains.

Some bodies were even restrained while they were still alive, strangled and burned or having weapons thrust into them or chains on them while they struggled on pyres before being set alight.

In Scotland, there is still no apology for witchhunts that killed women primarily for misfortunes that hurt people in the sixteenth to eighteenth centuries, ranging from family illnesses where the vulnerable died to accidents like cart and horse crashes that permanently injured or killed those involved.

The Witches of Scotland Campaign is asking Nicola Sturgeon to pardon those men and women that were wrongfully killed and correct those that are still happening in certain parts of the world.

The campaign, which was launched two years ago, is trying to secure a legal pardon for the estimated 2,500 people, mainly women, who were convicted and executed under Scotland's Witchcraft Act.

Witch hunts took place in many countries during that period, but academics say Scotland's execution rate was five times the European average.

Confessions were secured under torture. The condemned person was strangled and their body burnt.

Claire Mitchell QC, the co-founder of Witches of Scotland, said a public apology would be an essential first step towards making amends.

She said: “We're seeking a pardon for all of those convicted of witchcraft, an apology for all of those accused and a national memorial so we can remember what happened in the past. We're going to ask the Scottish government on this International Women's Day to make it clear that they accept that what happened to these people was a terrible miscarriage of justice and to apologise on behalf of the people of Scotland.”

“We think it would be important if Scotland stands up and says, 'we accept what happened was wrong'.

“That would send out a powerful signal and hopefully help others.”

In countries like Africa, many disabled children are seen as devils or omens, and older people are still being mistreated and killed as witches.

“What happened in Scotland hundreds of years ago is happening now in many parts of Africa…People are accused of witchcraft when there are misfortunes in their families - sudden deaths, accidents, and other tragic, unfortunate experiences such as loss of a child, divorce and marital difficulties.”

“People accuse most often vulnerable members of their family, mainly women, sometimes children and people with disabilities. They say they caused these misfortunes through magical means.”

In November, in Ghana's East Gonja District, Akua Denteh was beaten to death after being accused of being a witch. The murder of the ninety-year-old has once more highlighted the deep-seated prejudices against women accused of practising witchcraft in Ghana, many of whom are elderly.

There are even children who are abandoned in villages known as witches' villages due to superstition.

Human rights and gender activists now demand to see a change in culture in a country where supernatural beliefs play a significant role.

But the case of Akua Denteh is far from an isolated instance in Ghana or the world at large. In many countries, women are still accused of practising witchcraft each year. They are persecuted and even killed in organised witch hunts — especially in Africa but also in Southeast Asia and Latin America.

The hope is that more awareness of the past and its impact over here in the UK will spread to the African government and those countries that still stereotypically murder the vulnerable or misunderstood.