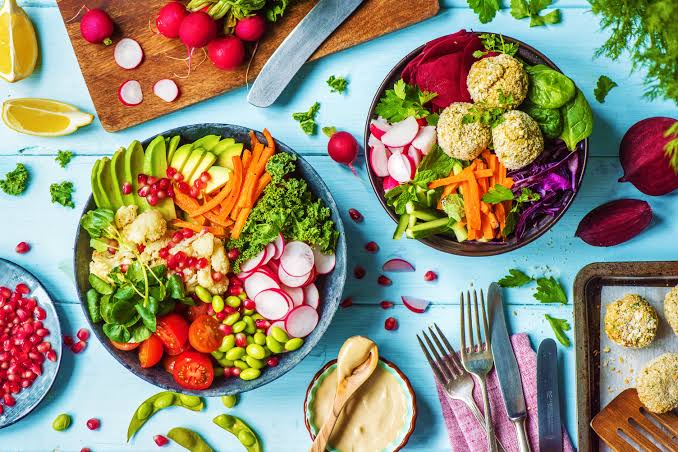 You may have seen people saying "I'm vegetarian". And it's quite common nowadays. You can easily find two to three people every day opting for veg and leaving Non-Veg. Why are more and more people drawn to vegetarianism? There are many reasons for it. Some people prefer to be vegetarians to keep themselves healthy. Meanwhile, other people prefer being vegetarians due to their love for animals. Well, if you ask me why I'm a vegetarian then it's because my family has been vegetarian for decades. But now as I grew up I realized the actual importance of it. It is more important to value someone's life than their taste- this is a belief I now hold. Additionally, it's all about the perspective of an individual as to what they choose to do in their lives. I won't say that Non-Veg is completely unhealthy. Several Non-Veg foods are the greatest source of protein and vitamins. But when comparing the two, the health benefits of veg outweigh the health benefits of meat.

Veggies aren't just healthier because people say so. There have been scientific researches which have shown that most of the calories and proteins we get come from the Vegetarian diet. Having vegetarian food reduces the risk of diseases like obesity, High Blood pressure, diabetes, and several types of cancer such as stomach, lung, breast, and colon cancer.

If you think it's hard to find tasty as well as healthy food then you're wrong. It's effortless to find this kind of veg food in local markets and restaurants in any part of the world. Every second restaurant these days has different kinds of salads on their menu. Not only salads but so many vegetarian dishes which are healthy as well as delicious. Online resources can help you make your veg food at home if you don't want to eat outside. Thus, you now have no excuse to not opt for a vegetarian diet. There is no such thing as a good reason to become a vegetarian, rather there is a good reason not to.

Some benefits of vegetarian food

The first point I want to mention here is the sparing of animals. I don't place this point first just because I love animals, but I feel killing someone for your taste is the cruellest thing in the world. Well, it is a subjective topic for debate but still, I feel so. What data has shown is that about 10 billion animals are killed every year for human consumption. Isn't counting scary? This is the reason why so many people give up on meat. They are worried about animals. Nowadays, there are farms in almost every city which are mainly aimed to produce Non-Veg food. They raise animals. A special diet is given to animals so that the meat will taste good when it is consumed. The main thing is that these farmed animals do not come under any legal anti-cruelty laws. This is awful.

A second most important benefit is to ward off diseases. A vegetarian diet is much healthier than a normal non-veg diet. It helps in preventing as well as treating heart diseases. In addition, coronary artery diseases can also be prevented with the help of a low-fat vegetarian diet. The data shows that deaths due to heart diseases have increased by 53% in India. At the same time, the mortality rate is less in vegetarians than Non-vegetarians. Normally vegetarian food has less animal fats and cholesterol, so vegans consume less fat and cholesterol and more fibre and antioxidants. So here's another reason to go for veg.

Another benefit is to reduce the risk of obesity. We all know that today's younger generation is facing obesity. The reason is very simple, eating junk food and non-veg which contains fats. It's very much clear that animal fats are harmful to our body and can cause obesity. Research has shown that people following a vegan diet lost an average weight of 24 pounds in a year, and it all happened without feeling hungry in a day. So in short, even if you eat veg whenever you are hungry, you will still be losing weight, or you can say you won't be gaining more weight. Why go to the gym to lose weight when you can easily do it by just eating.

You'll be shocked to know that Japanese people have a longer life than ours. People from Okinawa in Japan have the longest life expectancy rate in the world.  Now you would think, what is the reason for it? Let me tell you, the longer life expectancy of Japanese people is primarily due to fewer deaths from ischemic heart disease and cancers, particularly breast and prostate cancers. Low mortality is largely due to a low rate of obesity, low consumption of red meat, and high consumption of plant foods such as soybeans.  So, if you want to live longer, Go Veg!

Foods like meat, seafood, and poultry are one of the major causes of food-borne illness. So why don't we try to skip Non-veg and enjoy veg?

Are you a person who has to snooze the morning alarm twice or thrice? Well... if you are then you're surely lacking energy. A friend of mine was very upset about this habit. She was a non-vegetarian. But with a dietician's advice she started having veg food and believe me in a month she improves herself. Now, she doesn't need to snooze the alarm twice or thrice in the morning. The reason behind it is that Veg food gives you more energy, and you feel energetic all day because they are high in complex carbohydrates and keep supplying energetic fuel all day long. On the other hand, if you are having Non-veg food then the fats in it will block your arteries and your muscles will not get enough oxygen thus making you feel tired.

And the most important point, it helps in reducing pollution. Animal waste from farms which is discharged in rivers and streams causes water pollution. This discharge is one of the major causes nowadays for the degraded quality of water. As the saying goes "killing two birds with one stone". So being a vegetarian you are not only helping yourself but you are protecting the environment as well. Doesn't this feel good?

Is this only me who always wants not only tasty but beautiful plates to eat? This can be possible if you are eating Veg food because it is full of colours like red tomatoes, white carrots, green veggies, and colourful cereals and grams. And the best part is, these colours won't harm you in any way. so, Eat good-Looking food if you want yourself to be good-looking!

Now you are aware of the benefits of being vegan and also why you should choose it. You are not only making yourself healthy but you are also contributing to saving nature and saving someone's life. I know many people will say it's a life cycle if we are eating a creature but still, I'll suggest why to risk your lives only for a temporary taste. We need to see the long-term benefits if we want a better and healthy life. “ Nothing will benefit human health and increase chances for survival of life on Earth as much as the evolution to a vegetarian diet.”  -  Albert Einstein