The Burning Monk: A sacrifice to remember 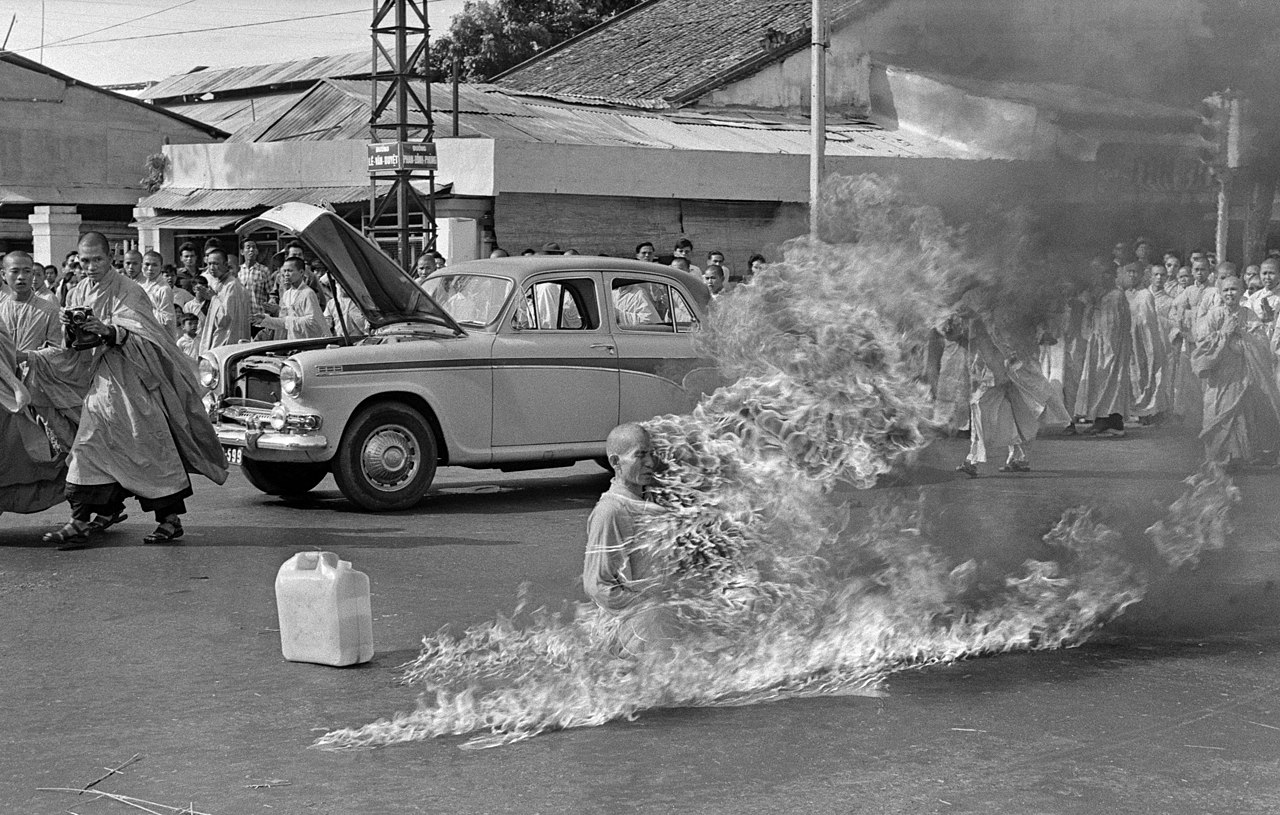 When Malcolm Browne’s photograph of the Burning Monk made its first appearance, the world was brought to its feet at the sight of Thích Quảng Đức sacrificing himself on Saigon street, Vietnam. The heat touched the White House and the then president John. F. Kennedy exclaimed “ Jesus Christ! No news picture in history has ever created such an emotion around the world as that one”.

Thích Quảng Đức, a Vietnamese Mahayana Buddhist monk self-immolated on the streets of Saigon on the 11th June 1963. The horror unfolded on the front page of various newspapers across the world and the name “the burning monk” engraved itself in the pages of history. Six months later this protest also led to the capture and assassination of the then Vietnam president Diem.

Thích Quảng Đức was born in 1897 in a small village of Hội Khánh in central Vietnam. Born as Lâm Văn Túc, he changed his name to Nguyễn Văn Khiết at the age of seven when he took his vows and walked the spiritual path of Buddhism. By the age of twenty, he was ordained as a monk and thus started the journey of Thích Quảng Đức(Dharma name). Soon he was appointed as the inspector of the Buddhist association in central Vietnam and was responsible for the construction of 14 temples. Further, he supervised the construction of 17 new temples in the south. A total of 31 temples under his supervision, the street where the last of the temples Quan The Am pagoda was constructed was renamed as Quảng Đức street in 1975. Further, he exemplified the teachings of Buddhism across the country.

But his act of self-immolation was a tale of sacrifice, rebellion, and courage.

The Buddhist Crisis: How did the crisis start? What led to the protests of Buddhists across various parts of South Vietnam in the year 1963?

Born into a catholic family, Ngô Đình Diệm served as the president of South Vietnam from the year 1955-1963. During his tenure, Diem headed a government biased towards Catholics in public service, allocation of land, tax concessions, and military promotions. South Vietnam, a country with a Buddhist majority of around 70-90% of the population in 1963, this bias was evident and condemned by the local Buddhist majority community.

Under Diem, pro-catholic policies were brought into practice, the Catholic Church, which was the largest landowner in the country, benefited from exemptions in land acquisitions and land reforms. Earlier in January 1956, he enforced Order 46 which allowed "Individuals considered dangerous to the national defense and common security [to] be confined by executive order, to a concentration camp” and not surprisingly this order was used for the oppression of the Buddhist majority.

Adding a final nail to the coffin, in 1959, the country of Vietnam was dedicated to Virgin Mary.

May 1963: The 1958 law- also known as Decree Number 10- was put into effect which prohibits the display of religious flags. But Vesak, the birthday of Gautama Buddha, an important religious festival for the Buddhist community was around the corner. A week earlier, the Catholics were allowed to display Vatican flags at a celebration for Diem’s brother Archbishop Ngô Đình Thục. But now the enforcement of the law created resentment among Buddhists prompting them to protest against the ban of the Buddhist flag in Hue, on May 8. This led to the death of nine civilians when the police and the army fired and threw grenades at the gathering.

As a response to the shootings, Buddhist leader Thích Trí Quang presented a “manifesto of the monks” which appealed for the freedom to fly Buddhist flags, religious equality between Buddhists and Catholics, punishment of the officials who were involved in the shooting, and compensation to the victims’ families. But Diem opposed taking the blame for the incident on the Government. And further labeled the Buddhists who demanded something as “damn fools”. This was released in the press and Diem agreed to fair compensation for the families of the victims and dismissed those who were responsible for the shootings because the authorities failed to maintain order during the protest.

The unrest showed its signs of escalation when more than 500 monks gathered by eluding the ban on public assembly in front of the National Assembly in Saigon. This gave birth to nationwide protests. The monks went on hunger strikes, unfurled banners and flags, and drove around the city displaying their fight against the president’s regime.

June 1963:: Protests took a dreadful turn when the Vietnamese police and ARVN troops poured chemicals on the heads of praying Buddhists monks in Huế outside Từ Đàm Pagoda. But Diem never admitted directly to the violence caused by the Government in Hue.

June 11::In a convoy, Quảng Đức emerged along with two other monks, and what followed were wails and cries of the monks who surrounded the site. He sat there on a cushion in a traditional lotus position and chanted a few prayers while the crowd gathered. Five gallons of petrol was poured on him and he set himself ablaze in the middle of the street. The burning monk sat there without a scream as the fire consumed his flesh and robes.

After the self-immolation, the U.S intervened and demanded Diem to negotiate with the Buddhist leaders on the agreement. The crisis deepened but President Ngô Đình Diệm’s attack on the Buddhists never stopped. He charged Quảng Đức for being drugged during the sacrifice. Protests erupted all over the country and continued until November when  Ngô Đình Diệm was arrested and assassinated.

November 1:: The crisis had reached its peak. The Army of the Republic of Vietnam(ARVN) contradicted the handling of the Buddhist crisis by President Diem and formed a plan called the Cách mạng 1-11-63 ("1 November 1963 Revolution"). In an attempt to arrest Diem and his brother Ngô Đình Nhu, the ARVN officers were misled at the Gia Long Palace in Saigon. But the bird had flown the coop. The Ngo brothers later agreed to surrender and were promised to be deported safely. What happened next was the assassination of president Ngô Đình Diệm and his brother Ngô Đình Nhu at the back of an armored personnel vehicle. The Kennedian administration, not impressed by the regime of Diem and his wrongdoings, was aware of the sting operation and stated that it was U.S policy to not intervene and stop the coup. The execution was brushed off by the generals saying that the brothers had committed suicide.

Malcome Browne’s iconic photograph of Quảng Đức’s self-immolation was awarded as the World Press Photo of the Year in 1963 and “the burning monk” remained as an important part of the history symbolizing sacrifice.

In a rare incident, Quảng Đức’s heart remained intact and did not burn. Considered it to be holy, the heart is now placed at the Xá Lợi Pagoda. Even today, he is admired by many Vietnamese Buddhists and receives their highest respect.

In a letter he had left, Quảng Đức said,

"Before closing my eyes and moving towards the vision of the Buddha, I respectfully plead to President Ngô Đình Diệm to take a mind of compassion towards the people of the nation and implement religious equality to maintain the strength of the homeland eternally. I call the venerables, reverends, members of the sangha, and the lay Buddhists to organize in solidarity to make sacrifices to protect Buddhism."