The Dark Side of Cosmetic Rhinoplasty 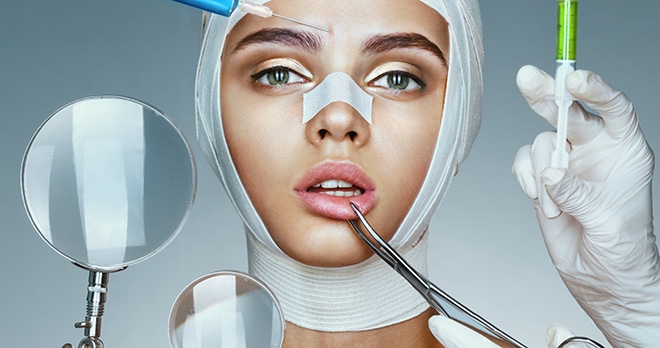 Going under the knife is a serious decision. From paying thousands to months of complete healing, rhinoplasty is not a walk in the park. Despite the hardships, countless individuals continue to spend on it. Is it simply to improve breathing? Or for an aesthetic face signifying a more profound issue?

Rhinoplasty, commonly known as a nose job, is designed to improve the nose's function, the cosmetic look of the nose, or both. Lasting up to a maximum of three hours, rhinoplasty can resize the nose, reshape the bridge of nostrils, change the angle between the nose and upper lips, and straighten the septum (a partition between the nose and nostrils). It provides more proportionality to the nose, thus easing the other aspects of the face. The first modern cosmetic rhinoplasty dates back to 1887 by an American otolaryngologist John Orlando Roe, whose patient suffered from extreme emotional distress due to a 'pug nose.'

Body dysmorphia disorder (BDO) or body dysmorphia is a mental health condition characterized by an excessive obsession with one's body. Contrary to eating disorders that focus on weight and body fats, BDO ranges from obsessing negatively over noticeable features like nose and hair to minor 'flaws' that others may not observe. It often develops during the teenage and affects both genders almost equally.

According to the studies from 1999 – 2018, the researchers found a strong link between body dysmorphia and rhinoplasty. For instance, in Scandinavia, Haraldson interviewed 67 participants in the late 90s. Astonishingly, the questionnaire revealed that most patients had intrusive thoughts about their noses that were perpetuated by the mirrors and not others. Similarly, in 2018, researchers from the U.S surveyed 298 volunteers. They found that 57% of the participants suffered from body dysmorphia and were interested in cosmetic rhinoplasty even though they did not need it functionally or aesthetically. Unlike the results from the U.S, Erika Strazdins from Australia discovered something else. In 2017, she conducted research with over 400 patients who considered rhinoplasty to solve their breathing difficulties. Although they needed functional rhinoplasty, Strazdin's study revealed that patients tended to believe they had poor nasal function due to their low self-esteem. Despite meeting the standard parameters, patients complained about nasal obstructions and severe obstruction symptoms.

Without a doubt, Strazdin's research, along with many others, showcases a deep connection between body dysmorphia and rhinoplasty. "It is understood that there is often a subtle difference between cosmetic and medical reasons for surgeries. Some patients proposed rhinoplasty for a functional issue without disclosing their cosmetic motives," said Professor Richard Harvey, the Head of the Rhinology and Skull Base Research Group at St Vincent's Centre for Applied Medical Research. If the surgeon has suspicions about the patient's motives, it is best to present a mental health awareness questionnaire to assess their self-esteem. The surgeons must understand people’s needs to counsel and educate them to avoid further unpleasant outcomes.

When the world succumbed to coronavirus in 2020, everything came to a standstill. Lives changed and so did businesses. Many large corporations closed temporarily or adopted the work-from-home model when small businesses shut their doors permanently. Expecting a similar fate in plastic surgery, it was a huge shock for surgeons when their appointments doubled during quarantine.

Doctors from the British Association of Aesthetic Plastic Surgeons (BAAPS) and The American Academy of Facial Plastic and Reconstructive Surgery (AAFPRS) witnessed a 70% surge in virtual consultations at the beginning of COVID-19.

Experts strongly believe that the 'Zoom Effect' or 'Zoom Boom' is the reason for this dramatic surge. With the world working digitally, everyone has become hyper-critical of their faces. “Today, using videos for almost everything is so ingrained into our society that it becomes a consistent lens for self-scrutiny,” shares Dr. Maas from AAFPRS. "Now, the major patient motivator is no longer static image filters instead it’s ‘Zoom dysmorphia,” he said. Additionally, the privacy of recovering indoors also appeared to be another deciding factor.

In 2020, Rhinoplasty ranked number one in the top five surgical procedure reports by the Plastic Surgery Statistics. Similarly, in 2021, data from the Aesthetic Society found that nose surgeries increased by 37% from the previous year. With Zoom sessions being an everyday activity, people were always forced to look ready and presentable. This consistent self-view function encouraged people to scrutinize every aspect of their faces. “With mobile devices nowadays, we see thousands of our pictures thus documenting aspects we don’t like about our appearance,” said Dr. Dennis Schimpf, founder of Sweetgrass Plastic Surgery in South Carolina.

Although the world returned to in-person interactions, plastic surgeries show no signs of slowing down. “Our patients who initially postponed reconstructive work or surgery were eager to schedule treatments to rejuvenate and prep themselves for upcoming social gatherings,” said the AAFPRS president.

The concept of beauty has changed drastically. As social media continues to occupy our minds, we must not become victims of toxic comparisons and unrealistic beauty standards.