The Rich that got Richer during Pandemic 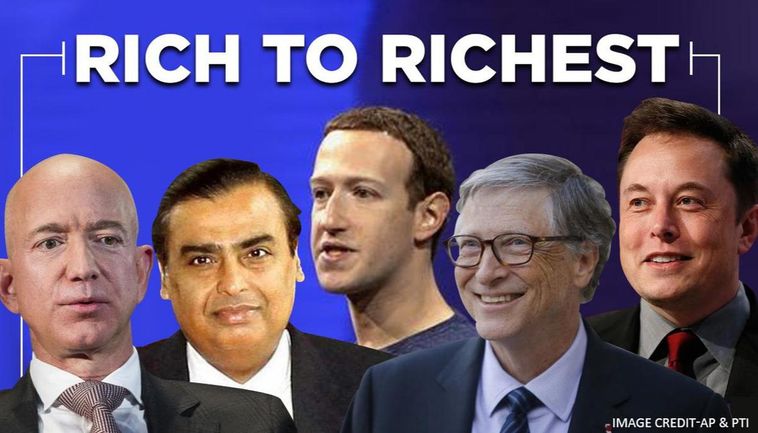 The COVID-19 epidemic has created the worst economic catastrophe since the Great Depression. For many, the coronavirus epidemic has ruined their financial futures. They have been forced to leave their employment or close down their companies, and many others have lost all they have worked so hard to save for. Despite this, the world's wealthiest people appear to be escaping the crisis unharmed, if anything, they may be getting richer.

Based on an analysis of Forbes Data, the 10 wealthiest billionaires on March 18, 2020, were identified by comparing their net worth with their net worth on July 27, 2021. The data presented here is startling in places:

Elon Musk became wealthy by selling Zip2, then co-founding PayPal. His fortune now derives from his $36 billion space exploration and rocket firm SpaceX, and his investment in electric vehicle maker Tesla, of which he is CEO.

Stock prices have risen in tandem with demand for electric automobiles. Tesla shares was valued $72 on March 18. On Oct. 13, it was valued about $440 per share, and it has since risen to nearly $500. In December, S&P Dow Jones announced Tesla will be included to the S&P 500 index because to its outstanding performance.

As many feared going outdoors because to the epidemic, many chose to purchase online at Amazon, the world's largest ecommerce site. Founder and CEO Jeff Bezos has reaped huge rewards from the epidemic. With a net worth nearing $200 billion, Bezos is the world's richest man.

Amazon's year-over-year revenue grew 40% in the second quarter of 2020. Online grocery delivery sales quadrupled year-on-year. This is in addition to Amazon's cloud computing services, which have increased in popularity as businesses go online.

In October, Mark Zuckerberg, co-founder and CEO of Facebook, was one of three persons with a net worth over $100 billion. During the epidemic, individuals utilized social media to remain in touch and exchange news about the November presidential election.

Since the outbreak of the epidemic, China's Zhong Shanshan has seen his fortune soar by 3,400%. He dropped out of elementary school and now manages Beijing Wantai Biological Pharmacy as well as the bottle water firm Nongfu Spring.

Larry Page's net worth has risen by almost $19 billion, along with Sergey Brin's, throughout the pandemic. Page is now one of the world's 10 wealthiest persons, valued at $70 billion. Like many other tech firms, Alphabet's stock price has risen since the epidemic.

Page invested early in Tesla. The stock price of the electric vehicle company fell below $100 in March before rising to nearly $400 in October.

Cloud computing is becoming increasingly important in organizations as more employees work remotely. Oracle, a cloud service provider, has recovered from a COVID-19-related drop. Co-founder and CTO Larry Ellison's net worth increased by nearly $80 billion as Oracle grew. Zoom leverages Oracle's cloud infrastructure. Oracle's stock price rose from around $40 per share in March to over $61 per share by mid-October.

To assist the government agency, register volunteers for vaccination tests, Oracle worked with the National Institute of Allergy and Infectious Diseases (NIAID).

Ambani's fortune has grown by 112.5 percent since the outbreak of the epidemic. In addition to oil and gas, telecom, petrochemicals, and retail, he is the head of Reliance Industries.

The CEO of Berkshire Hathaway, Warren Buffett, recognized the lack of economic parity throughout the epidemic.

According to a June 2021 CNBC program, "the economic effect has been highly unequal, with many hundreds of thousands or millions of tiny firms suffering severe losses while most large corporations have done well."

Bill Gates owns slightly over 1% of Microsoft after selling or giving most of his shares. His net wealth rose by an estimated $20 billion during the epidemic, as he invested in other assets. Gates' net wealth of $118 billion places him second globally.

The Bill and Melinda Gates Foundation donated $300 million to tackle COVID-19 through medicines, diagnostics, and vaccinations.

He was valued $52.7 billion when the epidemic hit, but today he's worth an estimated $75 billion.

After co-founder Bill Gates sold off substantial holdings in the firm, Ballmer became the largest individual stakeholder. On March 18, Microsoft shares was trading at $140. Almost half a year later, it was worth over $220 per share.

These enormous increases in wealth came amid economic instability and job losses for millions. From June to November 2020, nearly 8 million Americans slipped below the poverty level.