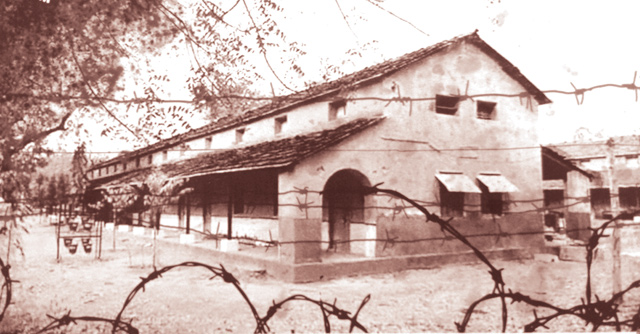 Megha (Wamiqa Gabbi) asks Sui (Yann Yann Yeo): “where’s this picture from?”, seeing the picture, the mother and son pair become quieter, their laughter fading out. Ming (Meiyang Chang) answers, "Deoli, Rajasthan". The picture was of the time of the 1962 Sino - Indian War. Ming explains that there was an internment camp for Chinese migrants. The topic is soon changed, the scene changed, and it isn't brought up again throughout the episode, but it lingered in my mind. I had never heard about any internment camps in India for Chinese migrants, so I decided to dig deeper into the topic.

The earliest known Chinese migrants came in 1780 to Kolkata, the then Calcutta. Chinese migrants then onwards came to India as refugees of poverty, famine or diasters and quickly became known for trade and crafts. After the communist revolution in China and World War II, many Chinese settled in India, especially in Northeast, Calcutta and Bengal. It was estimated that the population of Chinese Indian and Chinese migrants was anywhere from 20,000 to 60,000.

On 20 October 1962, the Sino-Indian war started with attacks from China in Ladakh and along the McMahon Line in Indian territory. While there is an extensive background for this war, the main reasons were the disputed sovereignty of Aksai Chin and Arunachal Pradesh border regions, both claimed by China and India as part of their territory. India had never expected an attack from China and thus was very unprepared. The war also was fought in very harsh terrain. The fighting went on for a month. When China reached its claimed lines, it announced a ceasefire on 21 November 1962.

This war had many repercussions on foreign relations, military and societal, but focusing on the societal factors, especially the by-product of this war on the Chinese Indians or the Chinese migrants in India.

Before the war, Jawarharlal Nehru had raised the popular slogan "Hindi-Chini Bhai Bhai", meaning India and China are brothers. But the war created tensions. After the war, many portrayed the Chinese as untrustworthy and dishonest. This feeling soon spread to the populace as well. The Chinese minority was blamed and assaulted over the war, even those who had lived in India for generations. Their schools, media, restaurants, shops and businesses were closed down, and their properties were damaged. Soon, legislation was brought in by the government. Chinese migrants were made to report to authorities for ‘registration and classification’ and it became harder for them to gain residency rights. Even the definition of "foreigner" was expanded to include the Chinese-descent Indians. There was widespread hostility towards the Chinese minority from all sides.

The Defense of India Act was passed in 1962, a month after the defeat of India in the war, and it allowed for “apprehension and detention in custody of any person [suspected] of being of hostile origin". This ambiguous language permitted the arrest of any person, mostly targeting people with Chinese origins or surnames. Also, in November 1962, many ethnic Chinese were asked to leave India, and around 7500 complied. These actions violated both the Constitution of India and the Universal Declaration of Human Rights, of which India was a signatory.

Those left behind were detained all over India, first in their local prisons but later taken by a train to Deoli, Rajasthan. All of whom were accused of being a spy, but even now not a single charge has been proven. Deoli had a desert prison camp built by the British in 1942 as a Prisoners Of War (POW) camp for the German, Italian and Japanese POWs in World War II. All the detainees were now put in this POW camp, housing at least 7,000 people, where 60% were women and children.

The conditions in the camp were very harsh for the Chinese detainees. They were unaccustomed to the heat, and sandstorms were frequent. Many suffered from heatstroke and related illnesses, which caused the death of some. Their rations and monthly coupons weren’t enough to get by. Overall, it was not a livable place for the detainees.

In mid-1964, it was announced that detainees would be arbitrarily deported to China. Many families were broken up, taken to ships in small batches and sent off. This forced deportation was stopped soon after a few months, and then onwards inmates were given the option of migrating to China. Only some took the offer while others decided to stay back. The 2,500 left who waited were desperate to go home, and in 1965 the government announced that they could go home. The release happened in small batches, and in mid-1967, the last group of unjustly imprisoned inmates left Deoli.

The situation did not become better for them even after returning home. Once they came home, they found that all their properties were auctioned off, their business was in a benefit state, and all tools were stolen. Some were even kept in local prisons for some time because local authorities did not know what to do with them. The compensation received was meagre. They had to start their lives from scratch again. But as if this was not enough, there was more humiliation and harassment in store from them. Their movements were restricted: they had to report to police once a month and gain permits to travel anywhere beyond 7 kilometres of their homes. This horrific situation continued until 1974, and the need to report to the police only ended in the mid-1980s.

The spirit of these ethnic Chinese did not break: they re-established themselves and refused to let bitterness cloud them.

Not many are aware of this part of history where people have been treated unjustly. Nor do many mention it. If India is to avoid repeating history, it needs to acknowledge and apologise for the appalling treatment of Chinese-Indians.