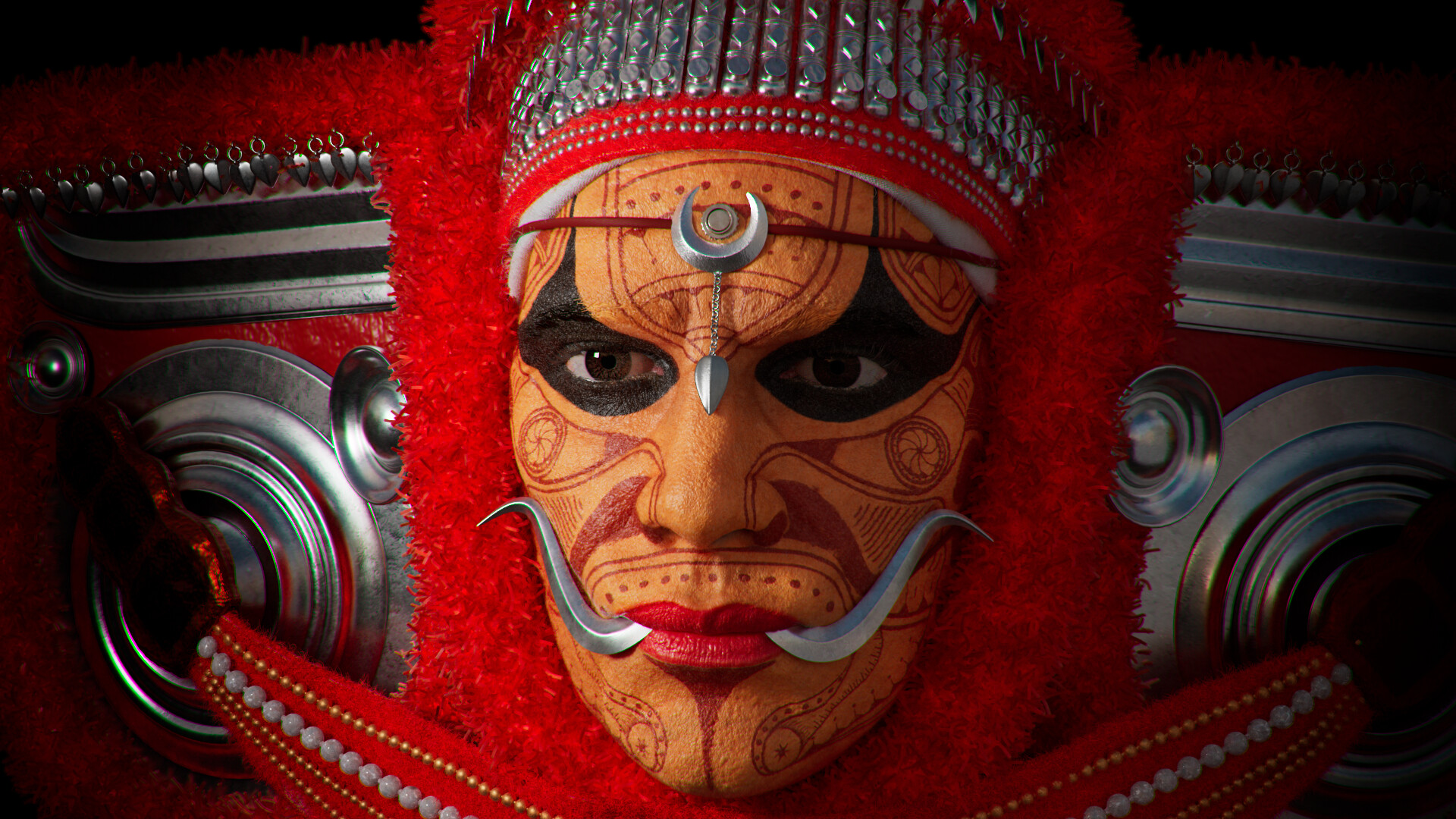 The world lives in a dilemma about whether God created man or man created God. The belief system of humans is far greater and stronger than any other. We have our perspective of a superior power called God. While a believer trusts his religious Almighty, an atheist denies the existence of a supreme being. Another school of thought called the spiritualists believes in oneself and consciousness. In a secular nation, everyone’s entitled to their doctrines, and humans, in general, look up to God in times of helplessness. Scientifically speaking, humans are striving difficult to attain eternal happiness, health, and immortality. We, Homo Sapiens, are driving ourselves toward becoming creators of the future. We are taking control of our destiny through technology and science. We are transforming ourselves from Homo Sapiens to Homo Deus.

However, an intriguing ritual in Kerala, India’s Southern strip, provides an insight into the evolution of man into God. It’s a religious experience “The dance of the gods, Theyyam.”

The books of history tell us the story of the origin of the Theyyam cult. The Malabar region of Kerala was occupied mainly by a native tribal cult who were divided mainly into four subcategories, Tiyan, Malayan, Pulayan and Pannan.The people of the tribal community celebrated the ritual and customs in a specific way. Spirits, animals, trees, ancestors, heroes, serpents, Goddess were the deities worshipped in the ritual. The customs involved sacrifice, blood offering, and other peculiar expressions. A demographic and social structure alignment resulted in the migration of the Malayali Brahmins known as the Namboodiris who held the higher ranks in the social hierarchy. Over the course, casteism played a violent role in the lives of the tribal community. The Namboodiris were considered Godmen and the lower caste as untouchables. The discrimination between the two was immense. There were significant differences between the Hindu tradition and the customs followed by the tribes. The social inequality denied entry to the temples of the Hindu community. The Brahmins believed in religious supremacy and ruled over the region. The victims of the lower caste, the heroic ancestors who stood up to these social evils and indiscrimination in those tragic times, were later converted, considered, and celebrated to be Gods by the name “Theyyam”. But slowly, the lower-class people were given small spaces, sheds, and open fields to promote their culture and tradition. The lines of disparity slowly faded and the recognition of the lower ranks gradually increased. Over time, Theyyam became an important ritual in Kerala.

Theyyam finds its prominence in the northern part of Kerala such as Kannur and Kasargod. The spectacle of the sacred ritual finds its birth around 1500 years ago. A combination of dance, music, and a visual marvel, Theyyam is performed by the tribal community who holds a significant position in the ritual. With about 456 types of Theyyam, the age-old tradition acts as a medium to connect to a God and seek his grace and blessings. The few names of the heroes who are idolized as Gods are Kathivanoor Veeran, and Thacholi Othenan. The heroines of tragic stories were Goddess Puthiya Bhagavathy and Makkam. A similar ritual is performed in the coastal districts of Tulu Nadu in Karnataka called Bhoota kola which resembles Theyyam in its Animist form of Spirit worship. 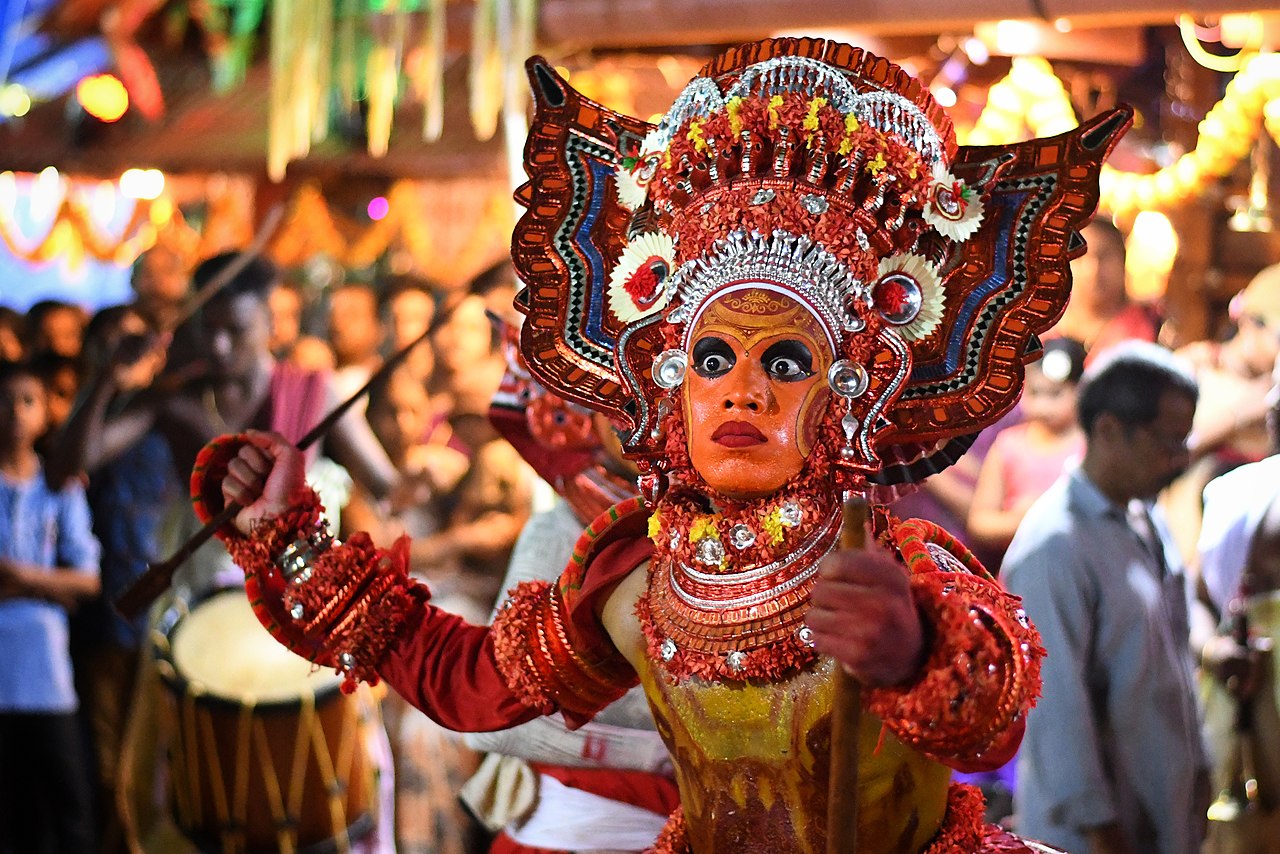 Theyyam translates directly to God and Theyyattam to the dance of the Gods. The origins of the ritual are embedded in another folk dance called Kaliyattam dedicated to the worship of Goddess Kali. The right to perform Theyyam lies with the scheduled caste and tribes inherited from their ancestors. Though there are more than 400 types of Theyyam, a few of them sit at the apex of the art form, namely Bhagavathi Theyyams, Saiva Vaishnava Theyyams, Manushika Theyyams, and Purana Theyyams. What catches one’s eye are the colorful costumes and the fascinating make-up (Mukhathezhuthu) of the performers of Theyyam. With hours of dedication and effort required for the makeup and costume, the performers also called “Kolam” are transfigured into divine, mythological, and heroic characters during the ritual. The main attraction and the most sacred part of Theyyattam is the headgear(Mudi) made mostly out of coconut leaves with a portrayal of the handicraft skills of the particular region. Olamudi, Neela Mudi, Ilamudi, Pala Mudi, Vatta Mudi, Peelimudi, Omkara Mudi are a few other different names for the headgear. The beautiful intricacies of the headgear play a significant role and keep one hooked to the ritual of the Gods as it unfolds.

The Northern Malabar region of Kerala- mainly Kannur and Kasargod witnesses Theyyam every year from October to March. The ritual is not time-bound, and it is performed in certain divine places called “Sthanas” and “Tharavadu”. Ancestral houses, open paddy fields, courtyards of Tharavadu are considered sacred to perform the ritual. On many occasions, animals are sacrificed to appease God and the Goddess. In one of the Theyyams called Karinjamundi(Karim Chamundi), the performer can be seen biting out the head of the chicken. Modern scholars condemn the slaughter of animals, but the believers say that the sacrifices are a part of the tradition followed since time immemorial. Many folk instruments similar to chenda, kuzhal, and veekni are played rhythmically during the Theyyam dance. The different steps performed to the beats are called “Kalaasams.” The performance begins with a preliminary ritualistic part called Vellattam or Thottam. With no proper make-up or any decorative costume, only a small red headdress is used during the initial act. Later, the performers return to the Sthanas with complete costumes and makeup and bless the devotees gathered around.  The entire performance is an amalgamation of dance, music, worship, and exotic makeup.

Every form of Theyyam is mainly performed by the male members of the community except one. The Devakkooth Theyyam conducted in Thekkumbad is the only form of Theyyam performed by a woman. The entire aura of the ritual is a divine grandeur that sends a chill down the spine among the viewers. 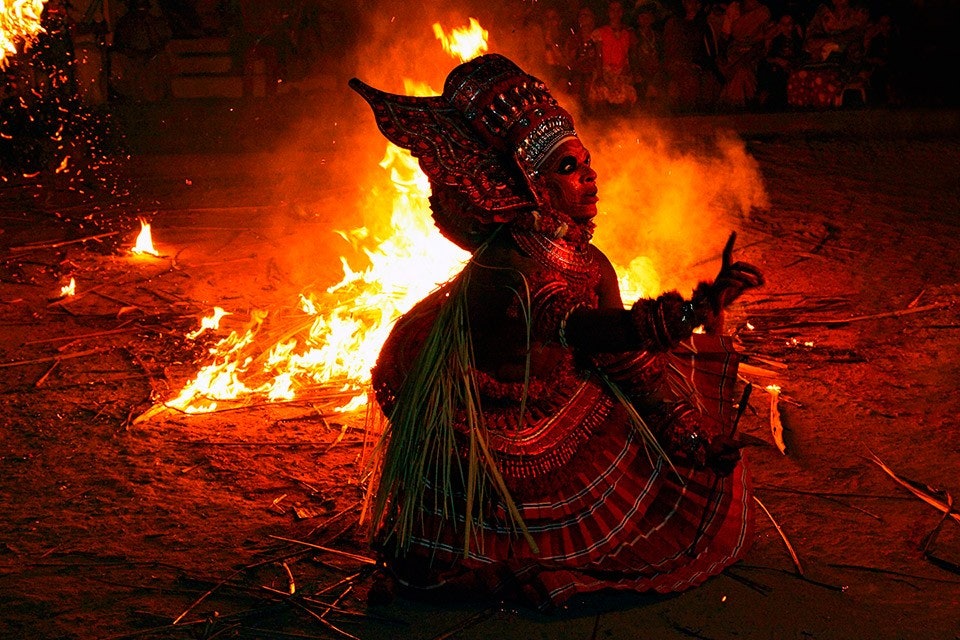 But as a paradigm shift, the ancient art of Theyyam is losing its importance by the day. The remuneration for the performers was very low, nobody volunteered to perform or even the art was not an attractive business for them to continue in its field. The revival of Theyyam is a slow process but the artists are now paid a sufficient amount if not hefty. Its popularity is now slowly spreading its wings and gaining much attention across the country. Theyyam is a unique, colorful, and exquisite form of worship performed to pray for the overall welfare and development of the people. A belief that it will increase the wealth, cure certain diseases, boosts the health of domestic animals keeps Theyyam as an important part of the lives of the people. In a world where man believes in a superior entity, Theyyam shows the metamorphosis of the same man into God.