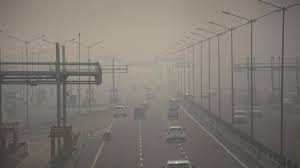 Specialists note that there is extreme air pollution in Delhi and the surrounding areas, and the air in those areas is contaminated with hazardous substances and particles. Dr Rishi Bhardwaj, HOD-Ophthalmology, Paras Hospitals, Gurugram, claimed that certain research on air pollution indicated that the National Capital Region's air quality "is as bad as smoking 40 cigarettes a day." "Open burning of agricultural waste (also known as stumbling), vehicle exhaust, and dangerous chemicals emitted by industrial waste are some of the most common factors contributing to an increase in air pollution. Since there are more contaminants in the air, there have been a lot of health emergencies declared in recent years by the Delhi government,” he said.

Smog, a thick layer of air near the ground that forms when air pollution levels are high, is present. It hurts and causes allergies in the eyes. Hazardous gases including carbon monoxide, nitrogen dioxide, and coarse dust particles are present in poor-quality air, which is classified by the Air Quality Index (AQI) as 'unhealthy', 'very unhealthy,' or 'hazardous,' and these gasses exacerbate symptoms of red, watery eyes and other eye allergies.

AQI is known as the Air Quality Index. A yardstick that ranges from 0 to 500 can be used to compare AQI. The greater the air pollution level and the larger the health issue, the higher the AQI number. An AQI number of 50 or below, for instance, denotes excellent air quality, whereas one of over 300 denotes dangerous air quality. It is evident that Delhi's air quality index (AQI) is rising daily; most recently, it was 352.

The most common eye issues caused by smog or air pollution include the following:

-Watery eyes, a burning or painful sensation, aching eyes, redness, swelling, and a stinging sensation are all symptoms of dry eyes.

-Dry eyes are also characterized by a gritty sensation, dryness, and an item in the eye.

On days when there is a public health alert due to pollution, especially in the early morning hours when pollution levels are at their peak, the risk of infections can be decreased by remaining indoors.

To mitigate the effects, frequently washing your hands and avoiding touching your eyes is recommended.

Staying hydrated is important, as is eating a well-balanced diet rich in Omega 3 fatty acids, which are particularly good for the eyes. Include salmon, carrots, spinach, almonds, walnuts, berries, and enough green leafy vegetables in your diet.

The online community platform LocalCircles conducted a questionnaire that garnered over 26,000 responses from inhabitants of Delhi, Noida, Ghaziabad, Gurugram, and Faridabad to understand how locals are experiencing the impact of poisonous air and the actions being done. According to a survey, 70% of respondents experience health effects and 27% want to leave Delhi-NCR because of the toxic air. The majority of Delhi and the National Capital Region's (NCR) Air Quality Index (AQI) has changed to "severe," with incidences of stubble burning in Punjab, Haryana, and Uttar Pradesh serving as a major source of pollution. Vehicle pollution, Diwali fireworks pollution, and other factors are additional factors.