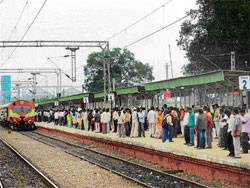 In Malur, a town some 25km from Bengaluru, the story of India plays out in microcosm every day.

Everyday, some 4000, daily wagers get on a train to travel northwest to work in the upmarket apartments and industrial complexes of Bengaluru because they cannot make enough money in Malur.

And everyday, thousands from far more impoverished areas in states like Odisha, West Bengal and Bihar stir from their dormitories or their homes to work in one of Malur’s many factories.

At 7.30 in the morning, Malur’s three-platform railway station is packed. On the platform are hundreds of men and women waiting for the train to Bengaluru to pull in. When it does, horns hooting and brakes hissing, they surge forward towards the doors. There are people spilling out the doors hanging on with their fingertips until the train reaches the first of the stops in suburban Bengaluru and some people get off.

Malur is a small town situated almost midway between Karnataka’s capital of Bengaluru and Kolar, home of the eponymous Kolar Gold Fields where a now defunct company mined gold. Every morning, starting at 7.30, almost 4,000 people throng the otherwise little-used railway station, according to Aasha, a commercial clerk at the station’s booking office.

Srinivas, an electrician, is a case in point.”I have been travelling to Bengaluru for the last 10 years. I earn Rs. 500 a day-Rs. 15,000 per month-which is not sufficient. If I work here, I won’t be able to earn half of it”.

The 45-year-old adds,”unless you work in a physically demanding factory or construction work, the jobs in Malur don’t provide regular work.” But, in recent years, the town also witnessed an influx of workers from various parts of India.

According to the 2022 Census, Malur has a workforce of about 30,000. Half of these people are reportedly employed for more than six months a year. The other half are marginal workers.

The town first saw the setting up of industries in 1985, in the first phase. With three phases completed now, the town has over 200 industries in clay-tile-brick,granite,pharmaceutical goods,chemicals,food processing and automobiles.

“Many students here discontinue their studies after completing school and work in the cargos of these big companies or in the industrial area. Everywhere it’s performance-based contractual work,” said Venkatesh, Economics teacher in a pre-university (PU) college in town.

The census says the town has a literacy rate of 82.5 percent. Sriram, a 50-year old former office assistant in Exedy Clutch India Private LImited in Malur Industrial Area,said, “My son too works as an office assistant in one of the factories. He earns only Rs. 10.000.” The father of three has been fighting a case against the management of his former company in the Kolar labour court for five years after they suspended him without reason.

“Implementation of the Sarojini Mahishi Report, 1984, which directs industries to appoint local people on priority, should be done immediately,”said B.V. Sampangi, president of the Industrial & General Workers Union (IGWU). The activist-turned lawyer is fighting Sriram’s case too.

“Natives have been losing their land,acquired by the Karnataka Industrial Area Development Board (KIADB). The compensation amount is less than what they would get after selling their land themselves. Industrialists use resources and infrastructure of our region but provide no job to those farmers or their children. They get away by keeping migrant workers at cheap wages because the locals demand full rights and better wages.” he added.

On being asked about the state of migrant workers, Sampangi said that they live in the most dismal conditions.”Many people live in one room and drink tap water as they can’t afford purified water. In the past, there have been deaths of workers due to chemicals released in LED factories.”

The lawyer explained that questioning the employers who violate the eight-hour-duty rule framed under the Factories Act,1948, would open the exit doors for these workers.Local police also back the employers. “Migrant workers don’t even come to Unions for help.”

Professor Y.J. Rajendra, State President ,People’s Union of Civil Liberties,said, “Migrant workers become victims of employers’ tyranny. It has increased more after Covid-19 lockdowns as the source of livelihoods has decreased in their home states. Labour contractors also swallow a lot of their incomes. If they come directly they can’t bargain much, have no social security and are exploited.”