What is the true cost of what everyone is wearing? Review and Comment on Andrew Morgan's documentary "The true cost" 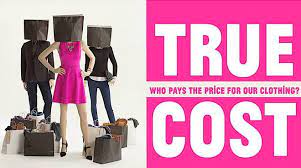 A few weeks ago I devoted a few hours to watching "The True Cost", a documentary written and filmed by Andrew Morgan in 2015.  Morgan is a film director who was tasked with capturing and interpreting stories and news events in a perfect and transparent way to encourage viewers to build a fair future in terms of ethics and environmental and climate change awareness.  The documentary explores the fashion industry and, above all, fast fashion.  Before watching this documentary I didn't know the reality of fast fashion, I just knew the names of some brands like Bershka, Stradivarius, H&M, Zara.  I bet every person who is reading this must have a piece from any one of these brands and this is very normal because of the low price and the advertising techniques of these fashion giants.  These brands guarantee an ever-evolving collection that can always keep up with the upcoming trends and what needs to be highlighted is the affordable prices associated with these franchising stores.  To me, this easy-to-reach was never clear but I never spent much time learning how their mobility works: until I saw Morgan's work.

The massive impact that these brands have had on the manufacturing environment is well-known, but the production of this industry has literally had a devastating effect on garment workers, of which 85% are women.  The response hurts not only the workers, but also their families and the people living in the villages near the factories: destroying an entire environment that is usually created near industries located in developing countries.  Andrew Morgan interviewed garment workers, workers, producers and farmers from thirteen countries where the fast-paced fashion industry is booming.  His first goal was to shed light on many of the "developed countries" that have been hidden, as one might refer to them, such as Europe and the United States (which should be discussed more deeply. He opened a Pandora's box and visualized the realities of this unethical type of art that allowed millions of people to buy more at lower prices and display multiple collections in one fashion season in their city stores.

Which aroused Morgan's interest so much that it took him to India, Bangladesh and many other countries where the industry was operating, a news event that did not really get much media attention in the West.  This is the Rana Plaza building that collapsed in Dhaka, Bangladesh in 2013.  The building housed a garment factory and did not apply to the expected safety measures that compel workers to report to work without proper security.  After years of inadequate maintenance, the building collapsed and that day the number of victims in the fashion industry was 933: workers who had already informed their superiors about the alarming cracks in the building.  They also protested for the critically low level of security established in the factory but their demands were not stopped and heard: their protest also affected their careers which was considered as an "act of rebellion".  As a result, the building collapsed.  Dramatic and very rarely considered in the media world.

Another interesting focus of Morgan's work is the masked process through which the North American company Monsanto (a biotechnological agro-based multinational company) has literally cultivated cotton from Indian farmers using sophisticated techniques.

What happened was that Indian farmers were given a new type of cotton, the first genetically modified in agricultural history.  Theoretically, this cotton should have a bacterium that could enable farmers to resist parasites without having to worry about pesticides: it was seen as a gift from heaven.

In short, what usually happens after an organ transplant happens to a human organism: the organism does not recognize and rejects what comes from outside. Thus, in a few simple steps, Indian farmers moved away and cotton production was privatized by Monsanto without the possibility of using their local cotton again. As if that weren't enough, the parasites that initially did not attack the plants developed into more powerful ones and are now able to invade North American cotton again.  Who has the solution?  If not Monsanto who programmed pesticides in their factories to fight against that particular type of pesticide?

In addition, both these pesticides and factory-issued fumes, as well as water sources contaminated by fashion products, cause serious damage to the health of everyone working or leaving near the factory, which can lead to degenerative diseases and cancer at an early age.

Nonetheless, its victims can do little to revolt against the system: the need to act in the present is more in their long-term vision, but more than the caution they are willing to take in the near future.  I believe it is normal to feel powerless before what is shown in the documentary and it is easier to surrender to cheap clothes than to think every time about the consequences on exploited workers.

Yet, Andrew Morgan's documentary aims to shed light on and scandalize something that many consumers prefer to keep their eyes closed, or really raise awareness about something that is not talked about.  Therefore, it shows again how powerful the source of information is and how powerful and important it is for a film camera, news article or any kind of communication to understand reality.Morgan has come to explain what the real price of a low-cost item found in a fast-paced fashion store is, even without really looking for it, doesn't seem too tempting to buy it: reflect, ask yourself why, and answer yourself by reading and learning.  It can be done when someone feels powerless.

By 2025, New Zealand Will Have Banned The Majority Of Single-Use Plastics