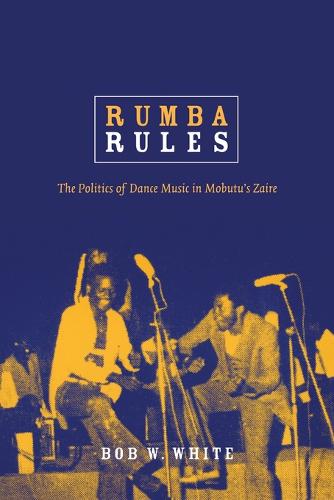 ‘To see the city not as a place, but as a process’ (18). The line intrigued me as a reader, when I was halfway through the first chapter of Bob W. White’s monograph Rumba Rules, to pause and reconsider his special position as a writer. How can one possibly contextualize a city? A seemingly impossible task indeed it was, since the very definition of the city was contingent and incomplete.

Music, therefore, appeared to be a legitimate entry point to enunciate. Living in Kinsasha started in 1995, White placed himself within the stream of history, observing the critical Zairian political changes during the last few years of the Mobutu regime and how Congolese music was subsequently influenced by social and political turmoils. White's professional analytic tool of putting down everyday phenomena and his unique personal experiences gave him the credibility as an anthropologist, an experiencer, and an author of this appealing work.

Throughout his field research and the whole monograph text, White constantly switched between two identities: an insider and an outsider. As an outsider, he observed with critical and academic length, analyzing specifically the Zairian popular dance music in Kinshasa, correlating it with Mobutu's cultural policy.

His approach pertained to the structuralism ideal, suggesting that human culture should be understood in relation to a broader system, enabling him to draw down the arguments in a disciplined way. While as an insider, he genuinely lived and worked in Kinshasa, even engaging in "Les Big Stars", a famous local music band led by Defao, providing a hands-on insight towards the industry's working formula and the subtle equilibrium of band life.

As a masterful example of participant ethnography, his study exhibited an effective anthropological approach for studying music, a topic that broke through the boundaries of subjects (Kart 1). It's thus not a book with lifeless or rigid description, but a breathing, moving panorama, a comprehensive integration of ethnomusicology, anthropology, economics, cultures, and history.

The juxtaposition of analysis and anecdotes brought reader familiarization towards the country, the field, and thus the cultural phenomenon behind them. The most obvious example appeared in chapter 4, Live Time, in which the structure of the writing itself mimics the sequence of a real-life performance.

Beginning at the waiting line, White seemed to lead the audience into an unknown destination where the performance began, a space crowded with music, dancing, shouting, as you can see the teenage boys beside you selling the snacks, fans behind you having conversations, and couples dancing down the stages.

He then continued to decompose the anatomy of a live performance, including the configuration of the stage, guiding the reader through a true live performance both literally and analytically.

White’s identity of physically being an ethnic outsider, a white foreigner, brought some unique encounters as well. He recounted one of his own performing experiences, in which he received plenty of money because of his skin color. He considered giving that money to other band members.

In his interaction with Koyo, who incessantly asked him for money, he realized how the scenario ran into a parody of humanitarian aid. White eventually and importantly learned that 'charity should not be a sign of the other's weakness, but as a manifestation of resourcefulness or as part of an ethic of the redistribution of wealth' (223).

Similarly for writing about Congolese music itself, rather than utilizing a benevolent narration, one should erase the condescension under this complicated power imbalance to fairly and reasonably analyze Congolese music at the same level as any other countries' music around the world.

Presenting, revealing, rather than imposing moral judgment in either praising or criticizing tone, White elaborated on one of his central arguments: how popular music became ‘synonymous with bad leadership and various forms of economic and moral decay’ (Ntarangwi 1).

He introduced the phenomenon of splintering, which means single man striking out of the band, and correlated it with the big leader image built by Mobutu. This was an insightful parallel between music and politics. It also revealed the significant impact of political power on the music industry and societal ideology, a direct result of Mobutu's authenticity motif. White avoided the journalistic cliché of focusing on the spectacular and monstrous aspects of the Mobutu regime.

By contrast, he suggested that 'every historical period has good and bad leaders. What changes are popular perceptions about the legitimacy of leaders’, conveying a more complicated relationship between state and music, leader and people.

Readers can sense a feeling of nostalgia through White’s recounting. White began chapter 3 with his encounter of leading two Europeans in Kinsasha, who expected the prosperity of popular music while facing a fading reality. It's a paradox faced by Congolese popular music: a thriving music scene and a simultaneously declining music business.

The parallel and the paradox can be further adapted to the prevalence of libanga during 1980 to 1990, following an economic recession that caused musicians to depend almost entirely on the informal sector. People with wealth will offer money to musicians for being recited in the music.

White himself was asked one time to present a list of names on a small paper during his live performance, which brings this factual phenomenon from text to life. A similar market was formed in the illegal production of cassettes. White in detail documented down the small business of vendors: how the price changed and how they used marketing strategies for living.

It served as another paradox because though in a sense they promoted Zairian music in their way, they significantly acted as cultural brokers who caused the musicians to be underpaid. In Martin Meredith’s The State of Africa, he called this period ‘the lost decade, in one country after another, living standards plummeted’ (Meredith 368).

In this case, the feeling of loss and the absurd paradox within Kinsasha’s state intertwined. Is this dilemma caused by Mobutu’s policy, or is it just simply a historical trend? The questions remained unclarified. What’s enunciated was the emotion presented inside the music, especially the love song, expressing a feeling of fear, love, and abandonment caused by political risk.

Hidden within the text, the feeling of hunger, uncertainty, and isolation could be seen as an assimilation of political culture. The song addresses social issues through a lyrical structure, beautifully and sorrowfully.

However, there are a few critiques I raised while reading. First was the categorization of the general Congolese music that appeared in Chapter 2. He classified the basic genres of music in Kinshasa into three parts: modern, traditional, and religious.

This was questionable since the clear differentiation between modern and traditional seemed to suggest a huge gap terminologically, a dangerous dichotomy, while in reality more overlapping and mild transition should be taken into consideration.

White described La Musique moderne to be those using 'Western instruments such as guitars and jazz-style drum kit' (32). It's arguable how or to what extent guitar used in contemporary Congolese music was from the western since guitars have long appeared in the griots' tradition. Thus, more appropriate terms other than tradition and modern could be introduced.

During his engagement in Big Stars, White initially started with playing guitars, but ended up switching his struggle in guitar learning to another organ, the insecticide spray can maracas which Congolese used to create special sounds. He also learned atalaku, singing and shouting in short percussive phrases.

However, this alternation may suggest an objectification of tradition, in which insecticide spray was inexplicably suggested to be more culturally abundant and ‘traditional’. A trace of haunting an anthropological symbol should be carefully noticed. What's more, I believe White can put more focus on female dancers, a particularly interesting group considering their minor social status due to the gender role.

While they also engaged significantly in live performances, their contribution to the understanding of popular music in Congo seemed to be ignored. Insisting that the discussion of politics should not exclude women, I thus suggest to further discuss the correlation between the predicament faced by female dancers regarding sexual harassment issues and the decaying of political and economic power during the Mobutu era. Some intriguing conclusions may be drawn down.

Besides all those critiques, White’s Rumba Rules was a well-elaborated piece of work that's both informative and authoritative. The city was indeed not only a place, as history was not only a written text, and music was not only an amusement. All of them were long and intriguing processes that contributed to our ceaseless comprehension of human beings, an ultimate process to decipher.