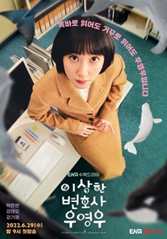 The South Korean drama, Extraordinary Attorney Woo has been described as ‘the global show of the summer’, and rightly so. This K-drama has dared to go where very few others have: discussing disability, discrimination and fighting prejudices. This article may contain minor spoilers of some of the drama’s storylines.

The show follows the development of Woo Young-Woo, (played by Park Eun-bin) as she finds her footing as an autistic attorney for a large law firm (Hanbada) and her understanding of the world. She has an eidetic memory and an IQ of 164, meaning she can quickly recall even the most niche laws in court to counter the opposition’s claims and find loopholes upon which to build her cases. Extraordinary Attorney Woo attempts to break the commonly held assumptions that autistic people lack social skills because her character goes from being a young woman with few friends and people that understand her, to her enlarging her circle of those who care about her. The show also highlights the issues faced by autistic people daily which include bullying, sensory overload, non-verbalism, being outside recognised social conventions and understanding people’s behaviour. While these may seem like minor obstacles for most of us, for Young-woo these are incredibly significant. For example, early in the series, Young-woo is puzzled about how to get through an automatic revolving door of the Hanbada building. It was a struggle for Young-Woo to even get the job in the first place because of her autism. This appears to be the case for many autistic people in Korea, as only 22% are employed – a percentage that is unfortunately commonplace globally. It is inspiring to watch her not let her disability get in the way of her life and work. Through each new case in every episode, other important subjects including the autism spectrum, debt, gambling, personal data hacking, North Korean defectors, kidnapping and rape are approached with great sensitivity.

The success of Extraordinary Attorney Woo speaks for itself. The K-drama rose quickly to the top of the Netflix charts and stayed there long after it finished airing in mid-August. It gained 24 million viewers in its first week and had 77 million viewers in total. It also had a total of 406.7 million hours of watch time by its seventh week. It was the most watched drama in South Korea for six weeks following the premiere. It managed to be in the daily US Top 10 charts 22 times this year – a rarity for a non-English speaking show. On Rotten Tomatoes it received a 100% rating on the Tomatometer and 86% on the audience score. It set the record for the highest ratings in ENA history (a South Korean satellite TV broadcaster). It was also the seventh most-tweeted about K-drama in 2022 so far, above the incredibly popular Squid Game.

The actors in the show have also become incredibly popular after its airing. Park Eun-bin, who has also starred in several hit shows including The King’s Affection (2021), surpassed one million followers on Instagram (an increase of 300,000) two weeks after the drama first aired. She currently sits at a follower count of 2.9 million. In an interview with The Star, Park Eun-bin explained she had some nervousness when first undertaking the role but was very proud and had learnt many important lessons from Woo Young-Woo. ‘When I chose this drama, I actually needed courage, to be brave to take up this challenge. And I think Woo Young-woo is exactly the one who is making me brave and courageous’. She also said: ‘I am grateful and thankful that a lot of people who have watched Extraordinary Attorney Woo tell me that I’m an actress they can trust and watch'.

Meanwhile, the male lead, Lee Jun-ho (played by Kang Tae-Oh), has also greatly increased in popularity and has received a great deal of praise for his character’s sensitivity, understanding and attentiveness towards Young-Woo. For example, Young-Woo loves retelling facts and stories about whales. Many with autism have an object fixation or a special interest that they very intensely focus on. For some characters in Extraordinary Attorney Woo this behaviour was seen as annoying, however, Jun-Ho allows Young-Woo to talk about whales during their lunch break and listens thoughtfully. He even begins to understand her analogies when she applies them to cases. He also helps her understand how the world works as she betters her relationships with others. His character goes a long way in showing how best to support someone with autism and be respectful.

The show is, of course, not perfect and has sparked some debate. Some, who face autism in reality, have described Woo Young-Woo as unrealistic. Yoon Wn-ho, a visiting professor at Inha University in South Korea thought the character more like a collection of traits associated with autism rather than a developed person. For example, he was troubled by her strict diet of kimbap (seaweed-wrapped rice rolls served in slices) which she finds reassuring because all the ingredients are visible. ‘People who see the drama might think that all people with autism only eat kimbap like Woo Young-woo’, he said. There was also a big issue surrounding the drama’s title before it was changed for Western audiences. The Korean title, 이상한 변호사 우영우, is most accurately translated to Weird Lawyer Woo Young-woo, which undermines the message of the show.

It should be remembered, however, that it remains a K-drama and has likely been exaggerated in places for dramatic effect. It is also unrealistic for one character to represent the full scope of a disability that has such a large spectrum. There are officially 34,000 known to have autism in South Korea, but the numbers are likely to be much higher as a result of the negative stigma that surrounds disabilities, which discourages people from going to get a diagnosis from a doctor. However, slow progress is being made with public awareness slowly shifting, resulting in improved accessibility.

Extraordinary Attorney Woo has done an excellent job at revealing topics which are often difficult to discuss or understand. While the K-drama is dotted with good humour and heart-warming scenes, it also deals with topics of great sensitivity which are rarely discussed in shows such as this. The drama has helped to increase awareness of autism. Its writer, Moon Ji-won, supposedly spent a year consulting with an early childhood special education professor to ensure accuracy. The director, Yoo In-sik, who said he had been concerned about how the series would be received in South Korea, said ‘I didn’t expect the drama to receive this much love’. There has been much applause for its promotion of the discussion of autism in South Korea, where for many people it remains a taboo subject. Hopefully, Extraordinary Attorney Woo has opened a door to more honest conversations and another to K-dramas to approach more sensitive, but equally important, topics.

The Flip Side Of The Miracle Of The Han River: A Bridge Of Suicide

Progress Is Born With The Feet Of An Ant.