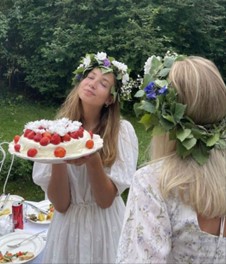 As the sun makes its climb to its highest point in the sky we are reminded that it’s almost midsummer for the northern hemisphere. Let’s make full use of this opportunity to delve into the history of the midsummer festival.

Firstly, a bit of clarification- what is the difference between the summer solstice, midsummers, and the equinox?

The equinox is something else entirely. This refers to the day in the year when the amount of daylight hours and dark hours are approximately the same. This occurs twice a year in late March and September for both the southern and northern hemisphere.

The midsummer celebration is always held near or around the summer solstice. Although there are links between midsummer and Christianity, and there is a solstice celebration within Christianity with connections to St John the Baptist, midsummer is a pagan festivity.

Midsummer is celebrated in many places around the world, such as Sweden, Denmark and Norway. There is such an emphasis placed on this celebration that it is a public holiday in Finland, Estonia, Latvia and Lithuania.

Midsummer celebrations are usually known as midsummer, or midsommar in Swedish. This day is also referred to as the feast of St John the Baptist, or St Hans day in Norway and Denmark.

Midsummer is an ancient celebration. Historically it marked the midpoint of the growing season, halfway between planting and harvesting. This celebration has roots in farming and agriculture. It also is known as a celebration of the start of the summer season.

In Sweden the midsummer, or midsommar, festivities begin on midsummer’s eve with music, dancing and bonfires. The atmosphere is lively, vivacious and effervescent. Midsummer must be celebrated in the countryside, surrounded by trees, lakes and fields. The full immersion in the natural world is essential. Flower garlands are made and worn, and a maypole, also embellished with leaves and blooms, is put up for more games and dancing.

Midsummer is a social event, it is about spending time with family, friends, and meeting new people. The celebration is grounded in the idea of sharing the festivities, everything is done as a group. It is a beautiful illustration of the way in which people can come together and unite. A show of solidarity sparks by the summer solstice.

Food is central to the celebration. Some of the traditional foods that are served are potatoes with dill and chives and pickled herring. Often barbeques are had during midsummer, roasting an array of foods from meat to fish, vegetables or fruit. Another key component related to the meal is the notorious strawberry cake; the perfect fresh, fruity and light dessert for this sweltering summer’s day.

Midsummers is acclaimed as a celebration of love, friendship, and fertility.