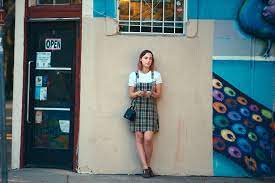 Lady Bird, the directorial debut of Greta Gerwig, conveys a young woman’s coming-of-age story in a specific cultural moment, 2002. The film follows Lady Bird, also known as Christine, through her last year of high school as she struggles to deal with her friendships and new relationships, aspirations for college, and economic troubles. The audience follows Lady Bird through her life as fast as her adolescence. She experiences rites of passage in a similar way to other coming-of-age films, like going to prom or losing her virginity. These small moments in the film ultimately explore the difference between separating who you are, from where, and what you think you should be. Lady Bird may seem like it is mostly about Lady Bird’s transition from high school to college. However, despite their constant bickering and sometimes contempt for each other, the heart of this film is the mother-daughter relationship.

In the opening scene of Lady Bird, the mother-daughter duo of Lady Bird and Marion, drive through California for a college visit, listening to an audiobook of The Grapes of Wrath by John Steinbeck. As the narrator reads the final paragraph of the novel, they both look onto the road ahead with tears going down their faces. This moment strikes a perfect balance of comedy and heartfelt sentiment. Only a few minutes later, Lady Bird opens the door of the moving car and jumps out onto the road in the middle of a heated argument with her mother. This single scene captures the unpredictability and the vulnerability of their relationship, setting the tone for what to be a complicated relationship throughout the film. Lady Bird tells her mother that she hates California and wants to go to college where the culture is. She craves more than her backwater Sacramento life has to offer, but going out of state is a luxury her family may not be able to afford. Lady Bird’s actions are often shown by her desire to run away from who she is. She makes up a stage name for herself, instead of using her given name. She also asks to be dropped off far away from school. She regularly dreams of a different life, constantly gazing up at the perfectly painted houses in the wealthy neighborhoods, making up stories about the life she could live. She doesn’t want anyone at school to know that she lives on the wrong side of the tracks. However, Lady Bird doesn’t see the hurt on the mother’s face upon learning this is how she describes home.

What seems to be Lady Bird’s greatest fear, is becoming like her mother. Any young teen could probably relate to this, as they don’t want to become like their parents. Possibly due to the amount of responsibility that someone obtains when they get older. Lady Bird sees that when Marion isn’t at home, she is at work, caring for her patients and working overnight shifts. And when Marion is at home she cares for her family. She has no personal life or creative aspirations, or she possibly had to give them up for her family and work. Lady Bird doesn’t want to think about the boring things her mom had to consider every day, like if a towel is going to throw off her whole laundry schedule. As with most teenagers, she wants to date, perform, be selfish, and leave dusty old Sacramento behind. She doesn’t want to be stuck caring about anyone else, like her mother.

What I noticed when I watched Lady Bird for the second time, is how Lady Bird’s relationship with her mother can be compared to Lady Bird’s indifference toward her hometown, Sacramento. Even though Lady Bird doesn’t realize her love for the city of Sacramento until the end of the film, her love for it is shown in how carefully she observes the city's imperfections. During a meeting with a teacher at her Catholic high school, Sister Sarah Joan, tells Lady Bird she sees how much she cares when her college essays describe the city in vivid detail. In a similar fashion to her mother, Lady Bird throws so many passionate tantrums about Sacramento because no matter how strongly she hates it, it will always be a part of who she is. Sister Sarah Joan says, “You clearly love Sacramento,” and, “you write about it with so much affectation and care.” When Lady Bird tries to explain that she was just describing it, the observant nun suggests, “Don’t you think maybe they are the same thing? Love and attention?” However, Lady Bird’s perspective of her mother does change. And instead of seeing the differences between the mother and daughter, the audience begins to see their similarities. The film begins with Marion seeming to get emotional by driving through Sacramento. And by the end of the film, it’s only when Christine herself drives that her gaze becomes different, that she learns to see her world, and how she views places she has seen for years differently. By the end of their meeting, Sister Sarah Joan praises Lady Bird’s college essay: “You write about Sacramento so affectionately and with such care.” Like her mother, Lady Bird has this caring attention to detail. In one of the few scenes of tranquility, we see Marion watching over Lady Bird sleeping, sewing her prom dress into the nighttime, hanging the dress in the room, and quietly showing her affection while holding her daughter’s clothes.

Throughout the course of her senior year, Lady Bird is slowly figuring out what matters in her life when her life is going to change in a few months when she graduates. Lady Bird realizes how much she cherishes her oldest friendship with her best friend Julie at prom, the last big high school event before they graduate. Here is when Julie tells her that she is not even going to be around for the summer. Just with any other high school friendship, their friendship will surely take a hit whenever Lady Bird moves away to New York. This is not because Lady Bird is a bad friend, but that is just how life works when you grow up. To evolve, grow, and experience a new life, unfortunately, it is essential to leave a couple of people behind. It would be hard to remain best friends with someone who lives across the country. And it isn’t like people can Facetime each other as they can today. One of the most beautiful scenes in the whole film is when Lady Bird first moves to New York and begins to unpack her suitcase in her dorm. In her suitcase, she finds a bunch of yellow pages with drafts of letters her mom tried, but failed to write to her. When Lady Bird calls her dad, he explains that he saved the letters from the trash because he thought it was important for her to read them. From what we see on film, mothers are usually portrayed as monsters or angels. With characters like the Wicked Stepmother in Cinderella or the mom from Home Alone, it would be hard to compare Marion to them despite Lady Bird’s thinking. Marion can be tender and caring but has a hard time expressing her emotions. She is often aggressive, impatient, and sometimes nasty and can’t support Lady Bird the way she wants to be supported. Marion says in one scene that she “wants [Lady Bird] to be the very best version of yourself that you can be.” And Lady Bird simply says “What if this is the best version?”.  In this scene, Lady Bird doesn’t feel like she is a good enough person and doesn’t think she can change enough for her mother to love her. Of course, this is not true, the car scene of Marion dropping Lady Bird off at the airport for college shows that she cares. We stay with Marion’s perspective as she curtly lets her daughter out of the car and drives away. Then every emotion appears on Marion’s face in a wordless moment as many years of love washes over Marion.

Lady Bird is a film full of genuine moments of young romance, typical teenage problems, and awkward humor, mostly coming from Lady Bird and her eccentricities. However, the root of the film is the moments that make the characters show their vulnerabilities. Lady Bird and her mother despite always yelling at each other both struggle with being vulnerable with each other and would rather live in anger. Most of Lady Bird’s frustration towards her mother is rooted in her desire to not become like her. She is so focused on this fear of becoming her mother that she focuses more on the differences than their similarities. Like the way, they both have an affinity for their city. Lady Bird explores how the places we grow up in become both a refugee and an obstacle to the rest of the world. As a result, Lady Bird projects all of her feelings of dislike about Sacramento onto Marion. So, Lady Bird can't differentiate between her feelings about her mother and how feels about Sacramento.