Lalit Modi announces that he is dating Sushmita Sen, reacts to trolls 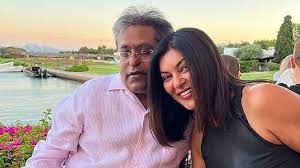 Founder of IPL (Indian Premier League) and former chairman Lalit Modi announced that he is dating former Miss Universe, Bollywood actress, and model Sushmita Sen on Thursday. He made his relationship official after posting close pictures with the Bollywood actress on his Instagram and Twitter accounts.

In his post on Twitter, he wrote, “Just back in London after a whirling global tour #maldives #sardinia with the family.” He added, “Not to mention my #betterhalf @sushmitasen47– a new beginning, a new life finally. Over the moon”. He shared another post on both Twitter and Instagram, clarifying that the couple is not married yet but is only dating. He further mentioned that their marriage might happen shortly. He wrote on Instagram, “In love does not mean marriage yet. But one that by God’s grace will happen”. Lalit Modi has also updated his bio on Instagram to announce his love for Sushmita and changed his display picture too.

Sushmita Sen’s brother, Rajeev Sen, in an interaction with the media, said: “I am pleasantly surprised (by the news) too. I will speak to my sister about this.” When Lalit Modi announced the announcement on social media, Indians reacted differently to the news. While a few congratulated the couple, others found it funny or odd, many taking to sharing memes and parodies about the couple.

The former Miss Universe, Bollywood actor, and model Sushmita Sen reacted to all the reports of her dating businessman Lalit Modi. She shared a photo of herself with her two daughters on Instagram, Alisah, and Renee, stating that she is ‘not married’ and there are ‘no rings.’

She wrote, “I am in a happy place! Not married… no rings. Unconditionally surrounded by love. Enough clarification was given…now back to life & work.” She clapped back at netizens trolling the announcement of her new relationship, saying: “Thank you for sharing in my happiness…and for those who don’t, it’s none of your business anyway. I love you guys.”

After Lalit Modi’'s announcement took the internet by storm, his posts went viral. Many media and troll accounts noticed that Modi had accidentally tagged Sen’s parody account, using the switch to poke fun at the businessman and his new relationship.

Lalit reacted to the trolls targeting his relationship with the actress, taking to Instagram to share throwback pictures and writing: "Why is the media so obsessed with trolling me apparently for wrongly tagging. Can someone explain - I only did two pics on install- & Tag is correct. I guess we R still living in the Middle Ages that two people can’t be friends & then if the chemistry is right & timing is good- Magic can happen.”