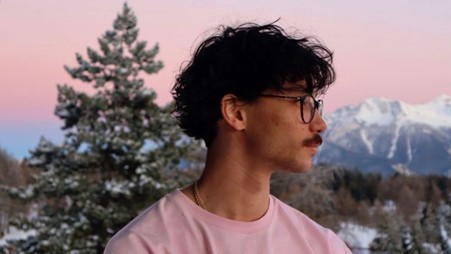 22-year-old independent music artist from Geneva is making his mark on the lo fi House music scene. TOMATOSLICE released his first EP (the eponymous ‘Tomatoslice’) in 2021 and has since collaborated with a number of artists, with a lot of excitement surrounding his upcoming projects to be released later this summer.

TOMATOSLICE describes his music as “house music with a touch of lo fi, a touch of vintage and analogue sound to it”. House music is a genre of electronic dance music, named after ‘The Warehouse’ club in Chicago where it originated in the early 1980s. Whereas lo fi, short for low fidelity, is a type of music production in which the sounds featured are deliberately imperfect. A sort of jazz for the electric music age, akin to jazz in its deliberate errors. Lo fi became popular in the 1990s, commonly known as DIY music.

TOMATOSLICE was drawn to start producing his own music after being influenced and inspired by some of the biggest names in the house music genre such as DJ Boring and DJ Seinfeld. He says “they are two of my favourite artists. The track ‘Winona’ from DJ Boring is the one that touched me the most. This is what pushed me to do house music”. The independent music artist was creating music prior to his interest in the house music genre, however it was with the success of his first lo fi house EP he gain the momentum and confidence to continue pursuing producing.

The young producer takes a very humble and laid-back approach towards his music. Although he is both passionate and highly skilled, he does not actively seek to be influential: “I just enjoy making it. I like people listening to it, that’s always nice.  But I don’t hope to influence anyone really. I mean it’s house music, you dance to it, cry to it for some of my music. I don’t have a message, definitely not. Some of my song maybe lean towards an emotional status. Otherwise, the music I create is for everyone”.

TOMATOSLICE tracks are produced in the music artist’s bedroom, as is common with this genre of music, “right next to my bed actually. I need to be alone, I mean I can have someone next to me but it will disturb me in my creative process. It definitely has to be silent because otherwise you can’t really hear what you are doing, and I do need snacks. But I don’t eat them while I’m working because I don’t want to get the equipment dirty!”

This set up illustrates the lo fi house music genre as authentic and organic. This is not a highly regulated set up but an artist’s work in its rawest form. TOMATOSLICE produces tracks you can get your teeth into, there is so much to unpack. It is also impossible not to start dancing along with a beat that good. Producing remotely enables the artist to create whenever they are moved to do so, but also necessitates diligence and commitment on the artists part to reach the kind of listenership achieved by TOMATOSLICE.

When asked about his production process TOMATOSLICE says “I sometimes just go with the flow, ideas just come. It all depends really, it depends on the mood I am in. Sometimes I have a clear idea in my head and try to replicate what I’m hearing in my mind. I get inspired by other house music producers. A lot of jazz, groove, funk and disco also.” From this it seems as though TOMATOSLICE was born to be producer, the process seems to unfold naturally for him. Although it is clear he puts a lot of time and work into his talent.

TOMATOSLICE tracks feel like going on a journey because the songs develop and grow as they progress, with new sounds and different layers added throughout. It is because of this that the songs feel like a ‘sound experience’. He says “that is definitely intentional” explaining that his first tracks “were not that good because I didn’t add that many elements to them. House music can go on for 4 to 5 minutes which is quite long considering there are no vocals. I still struggle sometimes to keep it interesting with loops, because house music is all about looping stuff for the most part. So, if you don’t want to get bored you have to get creative.”

One of features of TOMATOSLICE’s music which stands out are the soundbites or talking that he has integrated into his sound. “That was heavily inspired by the first pioneers in lo fi. It’s not really original, everyone who makes lo fi does it. But I like it because it adds something to the song, it gives a message to your track. If the right vocals go with the right sound, it can really bring the music to a whole other dimension.”

TOMATOSLICE tracks are well thought out and cleverly crafted. The pulsating, dynamic beat and flow of the tune urges its listener to bop along. Yet there is something more to his sound, there is an attention to detail and texture to his music which makes it so rich and complex. Whilst being undeniably smooth and ambient there is simultaneously something exhilarating about the beats which necessitates dancing. TOMATOSLICE has created a sound experience which is impossible to sit still through.

The artist has recently branched out into local Djing as a way of expanding his music practice. TOMATOSLICE also has Eps and projects scheduled to come out this summer so keep your eyes on his Spotify and SoundCloud profiles.