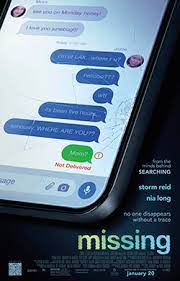 January is a month when movies go to die, at least, according to many online such as prominent YouTuber Penguinz0. In a recent movie review for M3gan, he stated, “January is a month where historically, all of the horror movies are dropped...no one wants to see them.” This was the stage set for the upcoming film Missing, starring Storm Reid, Nia Long, Megan Suri, Ken Leung, Daniel Henney, and others. The film was part of Regal's “Monday Mystery Movie,” described by Chief Marketing Officer Ken Thewes as “...offering our guests the opportunity to see an unreleased theatrical movie before it plays in any US theatre for only $5 this Monday evening,..."

We have received excellent customer responses for our past two Monday Mystery Movies, and this third movie announcement adds to the excitement. Providing this exclusive opportunity to our movie-goers is another way Regal strives to be the best place to watch a movie!" There have been three mystery movies played about every other month…a fun and exciting new marketing strategy by Regal to get people back into the theater after the industry tanked during the COVID-19 pandemic a couple of years ago.

The price was only 5 dollars per ticket, with the film scheduled to play at 7:00 p.m. allowing many non-movie-goers to watch an affordable and exciting option to get away to the movies.

The movie was filmed in a style that came up in 2014, known as the Screenlife format. This style was popularized by the film Unfriended. Screenlife is set on a computer screen, and it's carried through a media lens using many cultural online phenomena like social media, google, and usually, Apple products. Some cynical viewers might view these films as one long ad-read for Google and Apple products, as they are featured very prominently throughout these types of films allowing for a more seamless story flow.

This film, Missing, was a combination of Screenlife and a short theatrical camera bit that almost immediately transitions back into Screenlife. The directors creating this movie namely, Nicholas D. Johnson and Will Merrick, are relatively new and young filmmakers. The directors had the backing of Sony pictures for this film and had a budget of $1 million, with a projection of up to 9 million dollars in its 3-day opening weekend.

The film takes place in Los Angeles through the lens of the main character, June’s MacBook computer, alongside a video camera and a few other screens, most notably an Apple Watch. The movie opens with a shot of a young June messing around with a video camera and playing with her dad; as he sweeps her into his arms, her mother comes in and says hello to June and her dad. She runs to play hide and seek, where the video ends with a zoom out to a computer screen. A right-click on the video to the command 'cut here' in the software.

The user then moves the video clip into a folder called “For June” right next to multiple files showing brain cancer scans and results, alluding to the fact that Junes father has passed away due to the cancer scans. Beyond this screen, a video feed shows June sitting in her room, researching for a party while her mom and her new boyfriend, Kevin, get prepared to pack their bags and go on a romantic getaway to Colombia, where this film is centered around.

June sees her family get in the Uber that drives off and disappears. She plans the biggest party of her life for her friends while using her emergency money to purchase alcohol and other things for the party while talking to her family friend who stopped by, played by the illustrious Amy Landecker. As the movie progresses, it shows a montage of June’s massive party week while her parents are out of town, and as the days go by, the parties get crazier and crazier until the final day her parents are gone: Father's Day.

She posts something for her father, saying she misses him and wishes he is still alive. She’s comforted by her friend, who asks if she wants to throw the party, and June tells her, “I’m fine, let's just do this.” so the party begins, and multiple videos from different angles are shown from Snapchat or Instagram of the eventful night. One day, she wakes up to an alarm telling her to pick her mom and Kevin up from the airport. She looks at the mess of the house and decides to use a website that offers housecleaning services for a fee.

She arrives at the airport, and time passes; people deboard, pick up their luggage, and head their separate ways. As the day stretches on, June's mom doesn’t arrive, and she goes home frantically texting her mom with no response. She stresses for a day or two until she finally files a missing persons report with the FBI branch in the Columbian embassy while the title plays: Missing.

This film is going to be a hit among Gen-Z movie-goers. Within the opening 20-30 minutes, multiple media formats appear to hint at the target audience for the film. TikTok, Instagram, Snapchat, True Crime detectives, Netflix, and other brands made an appearance. True crime is all the rage amongst people younger than 25, and I predict this film will be a huge success and a cult classic for many young movie fans going to the movies in search of a classic mystery movie with a more modern Screenlife style. This movie is filled with twists and turns and will surely be enjoyable for many to watch while glued to the edge of their seat.