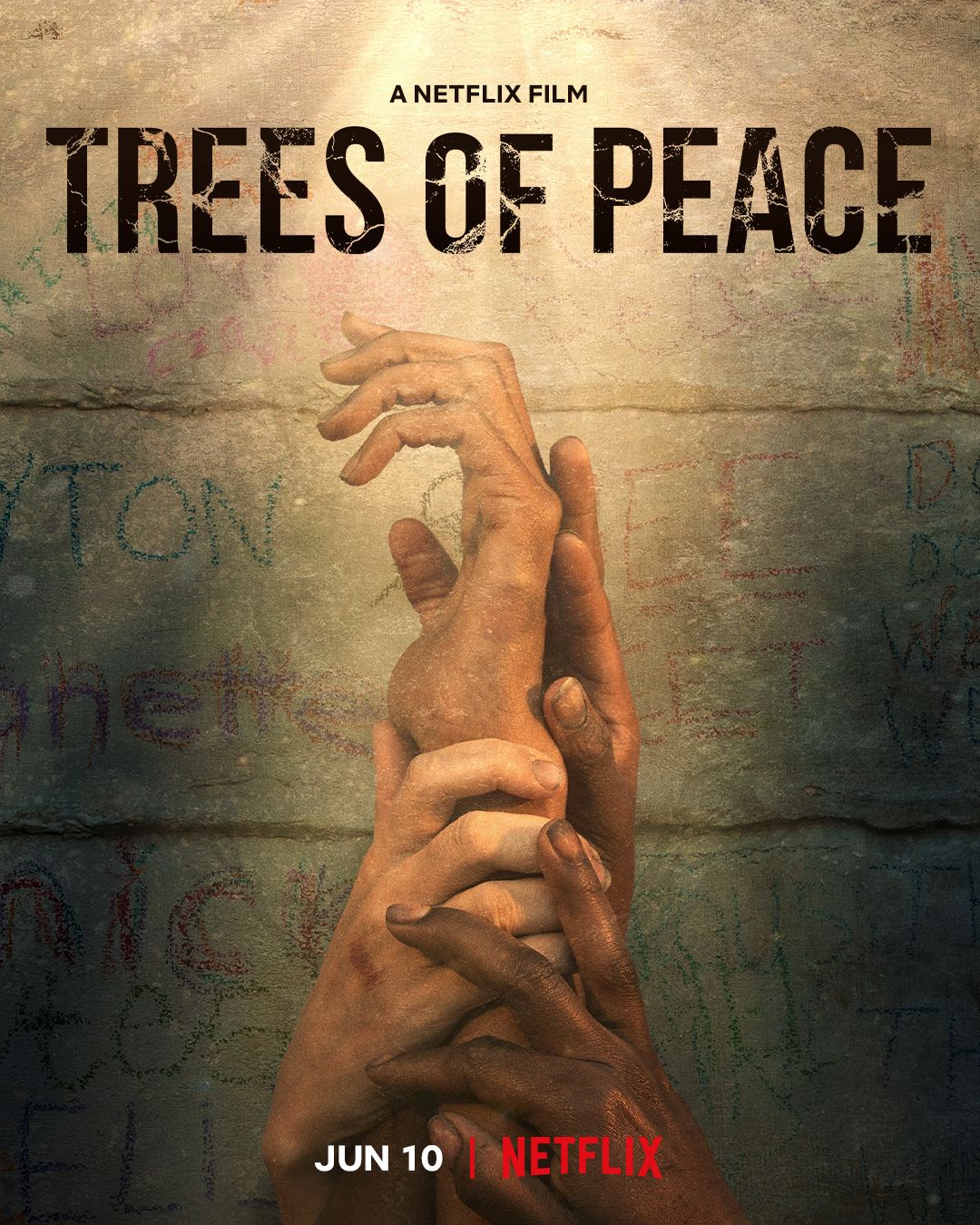 TW: This article makes references to rape and sexual abuse

‘Trees of Peace’ is one of Netflix’s latest film releases. Written and directed by Alanna Brown, the film tells the fictional story of four women hiding in a basement during the atrocities of the 1994 Rwandan genocide. It is based on the reality of thousands of Rwandan women.

The Rwandan genocide has been labelled one of world history’s most brutal events. From around April 7th to July 11th, 1994, between 800,000 – 1,000,000 people were slaughtered. The mass killings were mainly perpetrated by the Hutu tribe against the minority Tutsi tribe. However, moderate Hutus were also killed if they refused to partake in the massacre.

‘Trees of Peace’ is about the shared story four very different women, all of whom are suffering in fear of the happenings outside the basement in the streets of Rwanda. Annick is a Hutu moderate, Jeanette is a Tutsi nun, Mutesi is also Tutsi, and Peyton is a white American volunteering as a teacher in Rwanda.

Why did the 1994 genocide take place?

Tensions were rising between the Hutus and the Tutsis for decades preceding the genocide, but the situation was aggravated by Belgian colonisers, who gained control of Rwanda in 1919 via the League of Nations mandate. Belgian colonisers openly favoured the Tutsi minority, who were awarded privileges and Western-style education, leaving Hutus feeling discriminated against and full of resentment towards their Tutsi counterparts.

‘Trees of Peace’ conveys this resentment which is still felt by some Rwandans towards their former colonisers. Mutesi lashes out at Peyton, blaming ‘her people’ [white people] for deepening the divisions between the Hutu and Tutsi, as the Belgians overtly favoured the Tutsi during their leadership.

The following decades continued to harness much discrimination towards the Tutsi. Still, the proximate cause of the commencement of the massacre was when Rwandan President Habyarimana’s plane was shot down on April 6th, 1994. The attack’s perpetrators remain unknown, but Hutu extremists were adamant that the Tutsi were responsible, and so unleashed their revenge.

The failure of the international community to respond efficiently, and in a timely manner, to the mass murdering in Rwanda was devastating. The UN is an organisation that prides itself on its dedication to human rights and protection of innocent life. However, they were reluctant to send troops to Rwanda in the wake of the incident in Somalia, where 18 US soldiers were killed by Somalian militia while on a UN peacekeeping mission. And so, the Rwandans suffered while the UN nursed its international image. The lack of media coverage of the genocide also meant that Western civilisations knew little about the event; therefore, governments felt less pressure from their populations to act.

‘Trees of Peace’ highlights the UN’s tantalisingly delayed appearance in Rwanda. Their initial decision to take ‘whites only’ is difficult to watch, as Peyton declines the opportunity to let her race be her saviour, while black Rwandans Mutesi, Annick, and Jeanette are left behind. Mutesi is initially furious at Peyton’s decline for rescue, but later understands her reluctance to be the only one to be saved based solely on her skin colour.

Rape as a weapon of the Rwandan genocide

Sexual and gender-based violence increases during conflict for many reasons: opportunity, lack of reprimand, the alteration of norms, etc. The Rwandan genocide was no exception. In fact, according to the UN, between 100,000 and 250,000 women were raped during the short three months that the genocide spanned. Rape was so abundantly weaponised during the Rwandan genocide because the uprising’s aim was to change the ethnic make-up of the Rwandan population. Those already the ‘undesirable’ [Tutsi] ethnicity were slaughtered. Women were then forced to carry the ‘desirable’ seed to create the next generation of Hutus.

The effects of weaponised rape for women were life-altering. HIV in in rural areas of Rwanda rose from 1% in 1994, to 11% in 1997 post-genocide. Women were traumatised from the sexual violence they experienced, and unwanted pregnancies were the result.

The brutality of rape during the genocide was shown in ‘Trees of Peace’ through the rape of a pregnant woman outside the basement in which the four women were hiding. They remained paralysed while listening to the helpless woman and were unable to help her without revealing their hiding place and putting themselves in mortal danger. The scene was a disturbing watch and conveyed to great lengths just how brutal and unmerciful the genocide was for women.

Gender equality in the aftermath of the genocide

The atrocities against the female population seems only to have encouraged them to thrive in today’s Rwanda. Despite suffering from long-term effects of conflict (AIDS, pregnancies, PTSD, etc.) the women of Rwanda, about 60-70% of the population post-genocide, stepped up to rebuild their country, and now proudly has more female members in government than any other country in the world.

Despite their significant political progress, women’s role in the private sphere remains complicated in Rwanda. Studies carried out by Justine Uvuza reveal that, in reality, Rwandan women in parliament are still oppressed by their husbands within their homes. Women feel their career is more of a duty to their country than a personal endeavour and see feminism as a ‘Western’ ordeal.

The UK planned to ship asylum seekers some four thousand miles across two continents to Rwanda. The initiative - or human rights violation - was aimed at anyone who entered the country by illegal means. In other words, those who have no other choice but to smuggle themselves in terrifying conditions fuelled by desperation for the deserved opportunity at a peaceful and promising life, which is protected by the Universal Declaration of Human Rights Article 14: that “everyone has the right to seek asylum from persecution in other countries.”

Rwanda’s government claim they are ready to welcome 1,000 refuges from the UK and can accommodate many more. However, the UN is concerned about the validity of this statement due to Rwanda’s limited number of lawyers, case workers, and interpreters needed to manage the influx of refugees. In addition, Rwanda is still a developing country, as well as one trying to recover from a humanitarian disaster.

Rwanda is also suffering a shortage of arable land, with an economy that is heavily reliant on agriculture. The influx of refugees will not find the opportunities or employment in Rwanda that are available in the UK.  Human Rights Watch have also documented frequent attacks on freedom of speech, LGBTQ+ people, and the use of force against refugees in Rwanda. Freedom of speech remains taboo in a nation so recently plighted with conflict. Article 38 of Rwanda’s constitution permits freedom of speech so long as it does not prejudice public order. Refugees could pose threat to the region’s fragile stability.

‘Trees of Peace’ served as a reminder and tribute to the devastation in Rwanda, 1994. Focusing on the struggle of four women highlighted the disproportionate effects on the female population. However, all four’s ultimate survival and rescue from the bunker after 81 days portrayed their strength, faith, and sisterhood: a survival which undoubtably empowers real Rwandan women today. But cracks in the nation remain as they continue to rebuild their country. It does not seem the ideal place for refugees to build their homes. The happy ending in ‘Trees of Peace’ was not the case for thousands of Rwandan women, who still suffer long-term consequences today.

That '90s Show: A Rocky Start, But A Bright Future