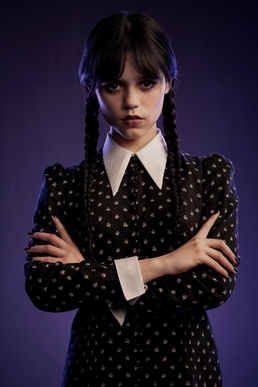 Wednesday, Netflix’s new explosive hit, is a modern reimagining of The Addams Family by Tim Burton. Since its release, the show has proven to be a great success as it broke previous records held by Stranger Things, with a tremendous 314.2 million viewing hours in its first week on the platform, and hitting the number one spot in 83 countries. But despite this success, it can be said that the show failed to reach the full potential of Burton’s directing dexterity.

Wednesday sets itself apart from previous adaptations of The Addams Family as it focuses on one member of the family. Tim Burton’s new series sees Wednesday, the gothic teen daughter of Gomez and Morticia Addams starting at Nevermore Boarding School, a school for fantastical teens, such as vampires, werewolves, sirens and psychics who go by the name of “outcasts”. At Nevermore, Wednesday navigates crushes, friendships, psychic abilities, and a murder mystery.

The original Addams Family was conceptualised by American cartoonist Charles Addams and was a satirical inversion of the post-war nuclear family in America. They are a peculiar family who indulge in the macabre and all things ghoulish. They are unfazed by the fact that other people find them strange and take pride in their uniqueness. In previous adaptations, directors stayed true to the morbid wonder of the Addamses, with cobwebbed corners and cartoonishly dark backdrops.

However, the Netflix adaptation seems to be missing the same peculiar allure. With overuse of CGI, the weird and wonderful aspects of The Addams Family have been drained. Burton has been criticised in his recent works for this same problem, as his 2010 work in Alice in Wonderland was said by many critics to be a “visual nightmare”, lacking the lustre and magic of his previous works, such as Beetlejuice (1998); and Wednesday ultimately fell flat.

Burton said he wanted to ground this iteration of The Addams Family in more realism but the bold choice to go against the cartoonish predecessors has not necessarily paid off. With the comical macabre of the Addamses and the artistic influence of Tim Burton, you would not expect the show to look and feel like a drab CW teen drama.

Despite claiming he wanted to tap into the realism of the world of the Addamses, the CGI for the hyde (the monster) looked like something out of the video game Plants vs. Zombies, with its overly wide, bulging eyes. The drawings of the hyde looked more realistic than the actual hyde.

Perhaps he had used the practical effects and style elements of his early works like Edward Scissorhands (1990) and Corpse Bride (2005). The CGI environments leave much to be desired but the painted backgrounds of the 1990s Addams films have more character and depth despite being lower in production value.

Aside from the flat visuals and desaturated colour palette, the Gen-Z representation is painful, to say the least. The show engages in all the standard stereotypes of the youths of today. All of the Nevermore students except for Wednesday are obsessed with social media and speak in unrealistic and at times unintelligible dialogue. Upon seeing Wednesday, one of the students exclaims “Woah! You’re in black and white like a living Instagram filter”.

The cringe-worthy dialogue may be seen as an appropriate part of a modern remake, but it could have been executed in a much more realistic and less cheesy way.

Another major criticism of  the show is the poor writing and senseless plot holes. Finding out Tyler was the hyde lacked tension and suspense, like it was thrown into the mix out of nowhere It came off as a very random choice and his villain arc was lacking development.

Both love interests, Tyler and Xavier, seemed poorly fleshed out and just followed the cues of cliche romance scenes with conflicting love interests. Additionally, in sharp contrast to the live-wire spark between Anjelica Huston and Raul Julia’s Morticia and Gomez, Zeta-Jones and Guzmán don’t have an ounce of chemistry between them.

The writers also take baffling liberties with history: Nevermore’s most famous alum is Edgar Allan Poe, who actually went to boarding school in London. But that’s nothing compared with the series’ inscrutable lore involving Pilgrim colonists terrorising other colonists who “live in harmony with the Native folk.” However, no Indigenous characters ever appear on screen, suggesting a lazy attempt at representation.

The saviour of the show was Jenna Ortega’s acting. The horror-queen, previously seen in Scream 5 (2022) and Ti West’s X (2021), perfectly executed Wednesday's dark mystère.  Her awkward charm and sharp features encapsulated the weird and wonderful nature of the character, bringing life to what otherwise would have been another dull CW teen drama.  Her Kubrick stare gave Wednesday a particular darkness and her extravagant and strange fosse dancing was well received by audiences.

‘Thing’ was also tremendously executed and Burton's indulgence in CGI seems to have paid off here. The singular hand held more emotion and charm than most of the other characters in the show.

Overall, the show seems to be a tragic waste of potential. Tim Burton's earlier stylism and artistic boldness would have worked wonderfully with the dark macabre of The Addams Family. However, by removing all sense of magic and peculiarity and replacing it with a saturated dullness, Burton washed away the frightful festivity of the spooky classic.

Strange World: Why Is Disney’s Latest Animated Film A Flop?