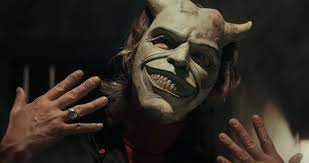 We have finally entered the month of October and it is officially spooky season. Halloween is just around the corner (yes, three weeks is just around the corner for Halloween lovers) and it is time to start thinking of new scary films that could eventually become all-time favourites. Many new scary films have been released this year, whether it be horror, thriller, suspense, or a mix of all of them, we have to admit we are spoiled for choice. Here is a list of a few of the new scary films released this year.

Recently released on Netflix, this film follows a teen who befriends an old multimillionaire. When the man spontaneously passes away, the young teen discovers he can still communicate with him through the phone which was buried with him. It is considered to fall under terror and has an incredible cast including Donald Sutherland (The Hunger Games) and Jaeden Martell (IT) as the leads.

A sci-fi thriller like no other as two siblings, Emerald (Keke Palmer) and OJ (Daniel Kaluuya), who own a horse ranch in California, find themselves being attacked by a mysterious extra-terrestrial force. The movie follows them as they try to decipher what this UFO is, wants, and most importantly, how to get rid of it. Despite being a thriller, there are plenty of comedic moments in the film, breaking up the tension and offering an immersive, raw, and real cinematic experience.

This psychological thriller is the prequel to the 2009 film Orphan, telling the origin story of Esther, a 31-year-old woman with a genetic condition that makes her resemble a 10-year-old girl. Esther escapes the mental asylum she has been placed in and once free, decides to impersonate a missing girl with whom she bears some resemblance called Esther Albright.

The film was released in August and is a perfect pick if you want to do a movie marathon as you can watch both Orphan and this one back-to-back. This plan will surely make for a horrifying night.

After having a meet-cute at a supermarket, Noa and Steve develop a romantic relationship. Things are going well, and he invites her to go on a road trip with him. Everything seems fine until they reach their destination and Noa discovers her boyfriend is a cannibal who kidnaps young women to both eat and sell their meat to people in high society.

This film can be watched on Disney plus and is not recommendable for people with a fear of blood, torture, or cannibalism.

A homicidal sadist has kidnapped a 13-year-old boy and is keeping him in a basement a secluded basement where he cannot contact anyone. However, there is a broken telephone attached to the wall through which he speaks with the previous victims of the man who kidnapped him, and together, they are plotting the best way for Finney (the protagonist) to escape.

Starring Ethan Hawke (Sinister) and Mason Thames (For All Man Kind), this supernatural coming-of-age horror is sure to be a hair-raiser.

After witnessing a tragedy that deeply affected her, Harper (Jessie Buckley) retreats to the countryside for a holiday however, her peaceful time is soon to come to an end as bizarre things start to happen. She begins to feel watched, like something in the shadows of the forest is stalking her. Her worst nightmares start to become a reality that she cannot escape from. Mixing terror and drama, this film is eerie, uncomfortable, and unsettling; perfect to watch with friends, otherwise, it is unlikely you will be able to fall asleep.

A film with an amazing female cast comprised of Rachel Sennott (Shiva Baby), Amandla Stenberg (Everything, Everything), Maria Bakalova (Borat Subsequent Moviefilm), and Pete Davidson (The King of Staten Island) amongst many others. The black comedy slasher film focuses on a group of girls in their early 20s who decided to organise a hurricane party in which party game goes wrong and multiple secrets come to light. A story about backstabbing, lying, and secret-keeping that ends horribly wrong.

This film was recently released during the month of September and can still be watched in some cinemas depending on location.

In the year 1979, a group of young filmmakers want to do an adult explicit film in Texas. However, the owners of the house they are filming in entrap them and they then have to fight for survival. The film pays homage to multiple different slasher films from the 20th century, specifically The Texas Chainsaw Massacre. Starring Jenna Ortega, Mia Goth, Martin Henderson Brittany Snow along with others, the film was significantly praised and currently holds a 94% on rotten tomatoes, an incredible achievement that sets it as a must-watch for this month.

These eight films are scary, enthralling, and definitely the types of movies you will want to watch with your friends… or alone if you are brave enough.