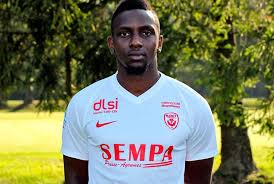 Another football star from France shockingly dies after suffering a heart attack during a football game. The thirty years old Bastia defender - Cristopher Maboulou died while playing a seven-a-side football match with friends in Bondy near Montfermeil on the 10th, January 2021.

France media houses report that the star was seen to be rushed immediately to the hospital after he collapsed. He was later reported dead, as nothing could be done to save him.

The star who plays the winger forward for his club was declared "unfit to play" by his doctors in 2011; after he developed a heart problem which prevented him from playing for two years. He was later said to have recovered satisfactorily and, he went ahead to land a top-flight move to Bastia three years later.

Maboulou played for Chateauroux, Nancy, Evian, and Greeks PAS Giannina. He is a renowned and well recognized superb player in France. He is known to have scored against a Marseille side managed by Leeds boss Marcelo Bielsa in 2014. He also played local football in the Savoie region of France.

Born on March 19, 1990, Montfermeil, France. Maboulou played for Ligue 1 side Bastia, multiple Ligue two teams, and Greek team PAS Giannina. He was called into the Congo national squad in 2018 but remained an unused sub. He became a free agent after he was released by Evian last summer.

Mabolou made two appearances for Thonon Évian in the Régional 1 league, scoring once, before the season was curtailed due to the COVID-19 pandemic, in 2020.

Chateauroux tweeted: "Christopher was a child of our club. Football was his life. - "It was while playing the sport that he loved so much that he left his favourite playground."

Former Chateauroux president Michel Denisot added: "My thoughts go out to the family and friends of the club's former player Christopher Maboulou. RIP."

The world has lost a fantastic player in the tragic, cold hands of death. All our deepest condolences go out to his family, friends, and loved ones.

May his soul rest in peace.