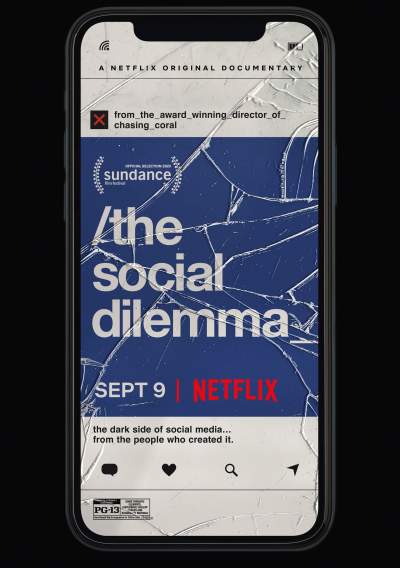 Nowadays, social media has become an inseparable part of our lives. Of course, it helps us in our daily lives, but it also wastes a significant amount of time if we do not exercise sufficient self-control when using it. The socials used to consume social media when it first appeared, but now the tables have turned, and social media is consuming the socials.

Through their documentary, 'THE SOCIAL DILEMMA', broadcast on NETFLIX on January 26, 2020, Jeff Orlowski, Davis Coombe, and Vickie Curtis have made an exceptional attempt to convey this reality to us.

PURPOSE & SAY OF THE DOCUMENTARY

The sole purpose behind making this documentary was to expose the darker side of social media. In this documentary, it is showed that how these social media companies completely ignore the basic ethics of maintaining the privacy of their so-called consumers and make a deal out of their private data which if leaked can be very dangerous for the concerned person.

The only message of this film is to remain as far away from social media as possible. Because it not only wastes our valuable time, but it manipulates us into doing things we would never think of doing. The team handles particular sections of social media sites which includes monitoring the users, studying the ‘psyche’ of every single user and manipulating them accordingly to see what their friends are doing or show some content in the interest of users just to increase their screen time.

PRIOR KNOWLEDGE REGARDING SUBJECT

Before watching this video, I had just a basic knowledge of what these social media sites do and how they make their money. Also, I was aware that these sites use our information to show content related to our interests, but the fact that our information was sold shocked me. This documentary also demonstrated how the appearance of content that we are interested in while scrolling is not a random occurrence; it is all pre-planned by the team in charge of the monitoring.

SUMMARY OF THE DOCUMENTARY

The documentary starts with the interviews of the people who have already worked or have been part of these social media sites in which the dark side of it is revealed.

The interviewees were initially hesitant to discuss the companies' secrets, but as it went on, they gradually revealed a great deal about them.

There is also a short story of a teenage boy which is shown simultaneously with the interview. The story is used as a live example to show how people fall prey to these social media sites.  The story shows how a teen guy is gradually impacted negatively by the media and ends up in trouble. During the interview, we can observe those people revealing things one by one and how they have been trying to raise awareness about it. One of them, before starting speaking publicly about it, also tried communicating with heads of these companies but they refused to make any changes for good. Finally, they all offered some safety tips that we should follow in order to keep safe.

The monitoring team understands the psyche of the user and builds a model of that person to carry out further work easily. To demonstrate this, they used VFX in which the model of that teenage boy starts as just an outline and gradually becomes an animated version of himself until finally the actual boy is shown in place of the model.

The content, symbolism, and special effects part of the model are the things I liked about the documentary.

The major thing which the documentary makes us aware of is the glacier below the surface of social media. It depicts practically every possible threat posed by social media, as well as how to protect oneself from it.

There was a line in the documentary “if you are getting something for free, then you are the product” which was very surprising for me. It freaked me out for a moment.

Speaking about the drawbacks I was not able to find any.

I would definitely recommend this documentary to all my friends.