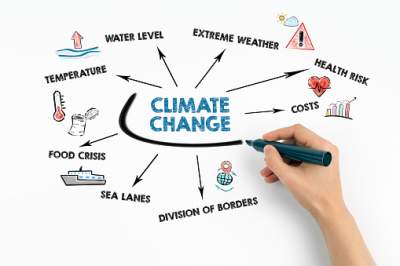 Imagine a much sought-after outing being cancelled due to a sudden burst of rain, or having to miss an important test at school or a presentation at work because it’s waterlogged all around. Imagine going to the beach and finding no sand but only water. Frustrating, is it not? Well, this is but only the tip of the iceberg called ‘climate change.’

What is Climate Change?

The UN defines climate change as “long-term shifts” in the weather and temperature patterns. Though these shifts can be natural or human-driven, in the recent case, it is predominantly the latter.

The main cause behind this is the production of greenhouse gases that have the capacity to trap radiant heat within the earth’s atmosphere, thereby increasing surface temperature. Other causes include constant deforestation and changes in land-use patterns.

What are its effects?

Increased surface temperature logically adds up to more heat than usual, adversely affecting the Arctic ice-covers. Melting ice, on the one hand, endangers the lives of Arctic creatures and on the other, leads to increasing sea levels. Further, climate change induces acidification of seawater, having a detrimental effect on the coral reefs and life within.

Rainforests and the inhabiting wildlife stand at risk today in the face of climate change. Forests and wetlands are akin to a natural defence system as they stand as a buffer between us and impacts of extreme weather calamities like floods and storms. Their power however is being ‘overwhelmed’ in the present situation.

That is all but half the list. Research indicates that increasing “climate disruptions to agriculture” might affect food security adversely. Warming leads to a longer growing season thus positively benefitting agriculture in some parts of the world. However, increased levels of heat and carbon dioxide, in turn, elevate pollen production, thus, intensifying and prolonging the allergy season.

A recent report by the Intergovernmental Panel on Climate Change highlights that Earth’s climate in every region is witnessing unprecedented changes. It further states that between 1901 and 2010, the global average sea-level rise was by 19cm. The Arctic shrunk every decade starting from 1979 with 1.07x106 km2 of ice loss per decade. Alongside, since 1990, carbon dioxide (a major greenhouse gas) emissions have increased almost by 50%.

It is further predicted that the sea level will rise to around 24-30 cm by 2064, thereby, casting a dark shadow of uncertainty on the future of the coastal regions and their inhabitants.

The IPCC report underlines that the role of human influence on climate is "undisputed" . We “still have potential to determine the future course of climate”.

An IPCC special report in 2018 highlighted the need to limit global warming to 1.5° C that could only be possible through “rapid, far-reaching and unprecedented changes in all aspects of society."

One of the initial steps in this direction was the Earth Summit of 1992 that led to the formation of the United Nations Framework Convention on Climate Change, presently ratified by 197 countries.

The Kyoto Protocol, 1997 was another milestone in this direction. It legally binds the developing countries to their emission reduction targets. Currently, 192 countries are parties to this protocol.

The Paris Agreement of 2015, ratified by 191 countries at present, deserves a special mention. It brought together all members of the UNFCCC for the common cause of undertaking "ambitious efforts" to combat and adapt to the effects of climate change while also supporting developing countries.

In 2019, UN Secretary-General, Antonio Guterres, called the Climate Action Summit to bring together world leaders, private companies and civil society to “support the multilateral process” to accelerate climate action. While, in the past, some steps had already been taken in this direction, the need for “more concrete plans” was highlighted.

How can we help?

Both national and international stakeholders have committed themselves to engage in positive climate action and achieving SDG 13. Antonio Guterres has proposed 6 major climate actions that include green transition, green jobs, green economy, investing in sustainable solutions, confronting climate risks, and cooperation. Governments have already started taking action but without the support of a well-sensitized population, the goal might be difficult to reach. Steps surely have and are being taken but as Antonio Guterres said, we “still have a long way to go.” OECD recommends that focussing on agriculture, electricity, building, transport and industry will help in tackling 90% of the emissions.

While governments and international institutions are doing their bit, we can do ours.

The United Nations Environment Programme suggests some ways, following which we can do our bit in solving the crisis of climate change. It highlights the importance of minimising recourse to flights only when absolutely required, cycling or walking more, eating more plant products, managing waste and effective cutting of waste, buying sustainable clothing, repairing and reusing instead of instinctive discarding and the like.

These steps can seem local but if followed well, their reverberations will be global. Climate change is a problem that affects everything from health to food to water supply, transportation and natural calamities. A multifaceted global challenge such as this requires an equally strong and united response.