Carbon Capture: A Step Towards A Net-Zero Future? 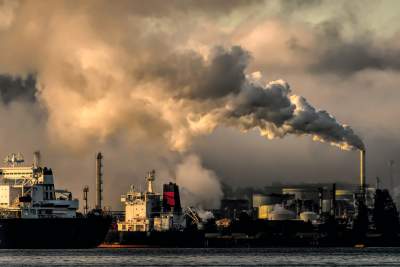 The Glasgow COP26 witnessed an increased commitment to emission reduction with 153 countries putting forward new 2030 emission targets. Commitments to achieving net-zero emissions by 2050 are also up on various countries’ agendas.

What is Carbon Capture?

Carbon Capture is a major part of the CCS and CCUS technologies. The former technology deals with capturing carbon dioxide from large-scale industrial emissions, transporting and storing them in deep underground geological formations. The latter takes this one step ahead and deals with ways of utilizing the stored carbon dioxide in various ways.

It first captures CO2 by separating it from the other gasses produced by industrial establishments. Recent innovations have made Direct Air Capture a reality whereby CO2 is directly captured from the atmosphere.

Once trapped, the gas is compressed and transported to various storage sites, mostly through pipelines.

It is then stored in deep geological formations like porous rocks, thus enabling permanent storage below the Earth’s Surface.

Apart from storing, CO2 can also be used in a range of products and services by directly converting it into useful products via chemical and biological processes. The International Energy Forum suggests CO2 utilization in the conversion of hydrogen into synthetic hydrocarbon fuel or polymers, stimulating the growth of algae which have the potential to absorb CO2 faster than any other biomass and in the creation of carbon fiber, biofuels, etc.

The growth of CCUS previously saw various impediments manifest in the cancellation of high-level projects, failure of government funding programs, etc. Experts highlight that the present annual capture capacity of over 40MtCO2 needs to increase to 1.6 billion tonnes (GtCO2) in 2030 to reach the net-zero target of 2050.

Quite a few CCUS fail to advance at a rate needed to meet their near-term spending milestones which are required by stimulus programs. Various projects are canceled due to failure to tackle the long-term liability of stored CO2. Increased operation costs are among other reasons cited for cancellations.

Various countries have witnessed constant scaling back of funding. Multi-year grant funding programs too are vulnerable to other external pressures of budget.

Additionally, CCS has an estimated capacity of capturing 90% of CO2 emissions fostered by the use of fossil fuels in electricity generation. It is however important to bear in mind that such emissions only account for 30-40% of total carbon emissions.

The development and consolidation of adequate regulatory frameworks is another major challenge.

Ironically, one of the greatest concerns about CCUS is environmental. The long-term CO2 storage engenders apprehensions as any leakage will in a moment turn the entire picture of environmental benefits upside down. Further, the long-term impacts of subterranean CO2 storage are still unknown and thus an area of concern.

A recent CNBC report highlighted that one CCS facility in Canada was found to “emit far more greenhouse gas emissions than it captures”. This Global Witness analysis was refuted as “simply wrong” by the facility. While this might be one single instance and both sides have their arguments, however, even more generally, reports of underperformance of other such facilities are not rare.

Many further highlight that carbon capture projects remain “at a very early stage of development” and the rate of investments in it too is less as compared to solar or wind energy projects.

2021 has shown “unprecedented advances” in technology. There is a wide belief that it will help in tackling global emissions and climate change. It is contended that without CCUS there will be limited or next to no solutions to tackle emissions from heavy industrial sectors.

IEA highlights that increased recognition of the necessity of CCUS to meet regional, national, and corporate net-zero goals, growing interest in low carbon hydrogen production, and improvement in investments account for the CCUS growth as witnessed in 2021.

CCUS has been expanded presently to steel, power generation, and hydrogen applications. However, there is still a need for increased policy support as highlighted by IEA.

It is widely acclaimed that to achieve net-zero “CCUS cannot spend another decade sitting on the side-lines of climate mitigation efforts”. Investors, governments, and industries all have a “collective role and interest” in ensuring the strengthening of CCUS.

Many see the technology as a “viable and useful solution”. Some countries give out financial incentives to companies that are capturing carbon instead of releasing it.

UNECE highlights the need of CCUS for attaining carbon neutrality, meeting the Paris Climate Agreement objectives, and delivering on the 2030 Agenda for Sustainable Development.

CO2 accounts for approximately 3 quarters of all emissions. Carbon capture helps in addressing emissions from already existing energy assets, supports a cost-competitive increase in low-carbon hydrogen production, and removes carbon from the atmosphere.

This makes it an important weapon to deal with climate change. In the words of Collin O’Hara, President, and CEO of the National Wildlife Federation, “there is no solution to get to net-zero without carbon capture technology”.

Having said that, it is equally important to address the challenges mentioned above to make the solution a more robust one. This will not only make the achievement of net-zero a possibility but also lead the way to a sustainable future.