Catastrophe Befalls When Water Runs Out: Is MENA Region In Trouble? 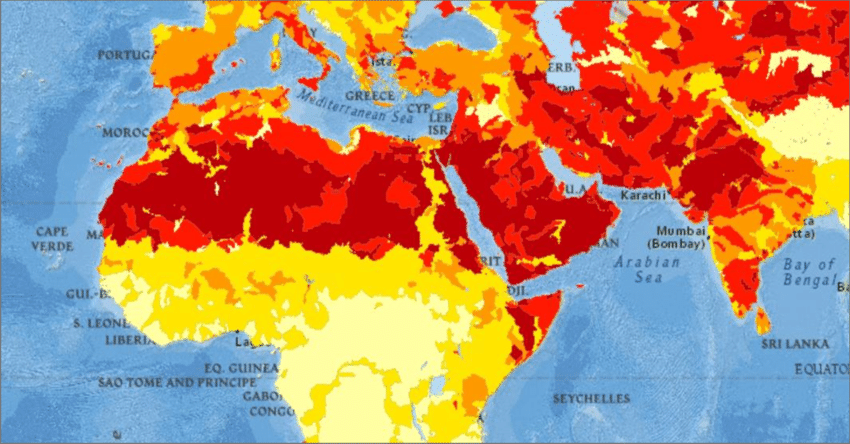 In 2018, South Africa declared a water emergency in Cape Town to avoid the implementation of the day zero strict measures which can be disastrous in a country that suffers from water scarcity to alarming extents.

To avoid the worst-case scenario, the South African authorities announced a system of restrictions that eventually limited water consumption to about 13 gallons per person over a definite period to dodge the point of no return in the area.

The situation is no better in many areas of the world as roughly 40 percent of the world's population is affected by water shortage. Hence the United Nations and the World Bank estimated that 700 million people risk to be displaced by 2030 due to water scarcity.

Although the crisis is hitting regions of the globe to different extents, the Middle East and North Africa (MENA region) seem to be receiving the heaviest blow. Continuous droughts have led (among other reasons) to one of the most devastating humanitarian calamities that resulted in the forced displacement of 20 million individuals in 2017. People in the region fled their homes due to food scarcity and violence incidents that erupted as armed groups attempted to monopolise or use water sources as a weapon to achieve political gains.

According to Amro Selim, director of Elmoustkbal Organization for Media, Policy and Strategic Studies, roughly 60 percent of the MENA region’s inhabitants are located in areas where water resources diminished to dangerous levels, leading to the imposition of a severe state of “water stress.”

Selim said in an article published by The Washington Institute for Near East Policy, entitled The MENA Region’s Water crisis: Avoiding Potential Water Wars, that “the total water productivity of the region only equals about half the global average” which, coupled with floods, droughts, and inefficient plans to exploit resources, will inevitably contribute to further dramatising the existing impasse.

In an area that accommodates 300 million people (expected to double by 2050) the current demarche undertaken by the MENA states can only add momentum to an already grave situation Selim commented, stating the example of Libya, in which “drinkable water supply has decreased from approximately 149 to 101 water distribution canals” due to the ongoing armed conflict that attempted to weaponize water and jeopardise citizens’ access to the first source of life.

In the context of water poverty, it is unwise to discard the social, economic, and political repercussions of losing available water supplies, in addition to the menace of unrest and armed conflict in many cases. In other words, not having enough water to irrigate crops and secure people’s share of drinking water can increase the risk of resorting to extreme methods to control the remaining quantities of this precious element.

According to researcher George Joffe, the MENA region is doomed by a chronic case of stressful water situation that has been exacerbating for decades to the extent of failing to provide “the minimum water supply to satisfy the essential needs of its population” which is designated by the World Bank at 1,700 cubic metres of water per capita per year.

Joffe confirmed in his article A worsening water crisis in North Africa and the Middle East that this water-stressed part of the world faces an even bigger challenge which is climate change, saying that “average temperatures are expected to rise by 3-5°C by the end of this century and rainfall will decrease by 20 percent over the same period.”

In the sense that the catastrophic manifestations of global warming will show its ugly effects in the run of the next 30 years as the lost water resources in the MENA region will not only contribute to mass displacement waves but will also incite “hydro-hegemonic behaviour” and “transboundary disputes”.

Based on estimates, the Maghreb region (Tunisia, Algeria, and Morocco) is expected to become a major spot of high temperature, especially with the decreasing levels of precipitation and frequent occurrences of droughts.

As in the case of Tunisia, which is mostly situated in a dry zone, journalist Raoudha Gafrej stated in her article Water shortage in the Maghreb: Climate change and Tunisia's water management challenge that “the availability of water per annum and per inhabitant has now been below the absolute water scarcity threshold of 500 m3 per year per inhabitant for over 30 years.”

In effect, Gafrej attributed the elevated pace of water wastage in the North African country to poor management of resources and grave cases of dam sedimentation. Observers have partially attributed the current issue to the inefficiency of infrastructure to preserve rainwater. For example, Tunisia loses track of nearly 20 percent of its storage capacity because of sediments and defective maintenance.

On the other hand, nearly 80 percent of water supplies are used to irrigate agricultural lands in Tunisia due to the fact that Tunisian decision-makers have made up their minds decades ago to allocate more resources to boost the market of exportable agricultural products. This orientation gave rise to a phenomenon known as exporting water by consecrating an important share of it to grow products designated for exportation such as citrus, olive oil, and dates.

With the rise of global awareness about the looming danger of losing precious water reserves in recent years, Tunisia as well as many other countries in the region have been opting to mitigate the excruciating effects of water scarcity by adopting reformative approaches to counter the occurrences of mismanagement, corruption, and negligence in this sensitive area.

The water authorities in Tunisia, mainly the National Water Distribution Utility (SONEDE), the General Directorate of Rural Engineering and Water Use (DGGREE), and the ministry of agriculture attempted to improve water distribution systems and irrigation channels, in addition to moderating the population demand by increasing the potable water pricing system.

However, the road to achieving a full rehabilitation of water structures in Tunisia can be bumpy at a time when populations of the world are racing against time to secure their populations from a global water crisis due to the proliferation of extreme weather changes that contribute directly to transforming the earth’s ecosystems and curb precipitation levels.