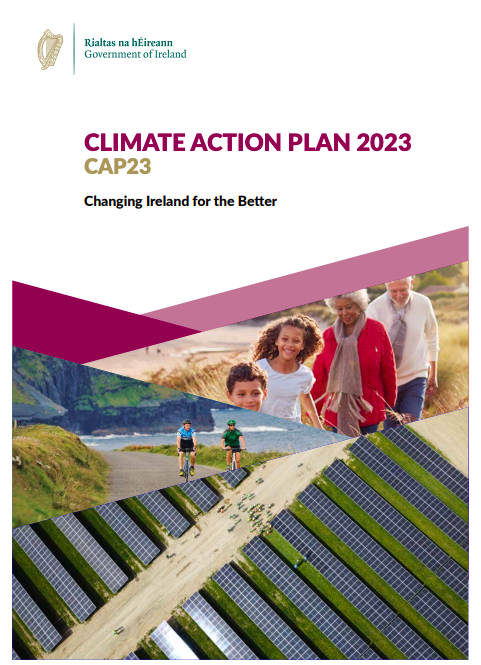 Ireland is ready to take another step in implementing the action calls with the latest released Climate Action Plan (CAP) 2023 by the government. This plan is a different and improved version of the CAP2022 as it has greater detail on “the how” rather than on “the what”.

The Climate Action Plan 2023 sets out concrete measures and roadmaps required in cutting carbon emissions and achieving the legally binding target of a 51% reduction in greenhouse gas emissions by 2030. This plan is the first to be prepared under the Climate Action and Low Carbon Development (Amendment) Act 2021.

The Climate Plan demands scaled-up actions across every sector may it be transport, agriculture or energy production. In Ireland agriculture accounts for over 37.5% of total Green House Gas (GHG)s emissions, which mainly consist of methane gas from livestock and nitrous oxide due to the use of nitrogen fertilizer and manure management. In addition, transport accounts for 17.7% while energy industries for 16.7% of the total national emissions.

The latest plan has six vital impact sectors where it aims to reduce 75% of emissions from energy industries, 40 - 45% from the building sector, 50% from transport, 25% from agriculture, 35% from industries and production, and a change in land use of the country. The exact reduction target for this sector is yet to be determined.

The reduction in the energy sector is to be done by facilitating a large-scale deployment of renewable energy sources. This includes an increase in the generation of power from onshore wind to 9GW (where 1 GW = 1 billion watts, which is typically enough to power 600,000 homes), from solar to 8GW and offshore wind to at least 5GW. A new Green Electricity Tariff will be introduced by 2025 in order to encourage people to use renewable electricity at times of high wind and solar generation.

Along with energy, the transport sector has also been given a huge target of a 50% emission reduction by 2030. The plan is to AVOID the need to travel as much as we do today, and attract the public towards sustainable travel modes such as Public Transport, Cycling and Walking to reduce the number of cars on the roads. Increasing the proportion of Electric Vehicles (EVs) in car fleets by 30% is another challenge in the box.

Ireland’s minister for Transport, Environment, Climate and Communications Eamon Ryan believes that “decarbonization of the transport sector” is a significant challenge. He said, “Changes here impact everyone. Over decades, we have built our country, our towns and cities, around the car and that is just not sustainable. This new Climate Action Plan will enable a healthier, cleaner and more connected transport system for everyone.”

There is no doubt that sustainable modes of transport will help mitigate climate change, but the current situation of the public transportation system and some recent events regarding cycle lanes or trams in some parts of the country suggests that it’s a bigger challenge than it seems. From January to March 2022, the construction of the cycle lane in Galway was considered to be the most divisive issue in the council. The rural and sub-urban areas of the nation have almost no connectivity to public buses or any other means of public transport.

Moreover, if we talk about the agriculture sector which is a big part of the Irish economy and employs around 170,400 people, or 7.1% of the total workforce on the island has a target of a 25% reduction in GHGs emissions. To achieve this target farmers will have to reduce the use of chemical nitrogen while increasing the organic farmlands to 450,000 hectares. To reduce the methane emission from livestock measures like earlier finishing of beef cattle or changing the breeding or feeding system will be put in place.

The minister for Agriculture Food and the Marine, Charlie McConalogue welcomed the launch of the Climate Action Plan 2023 and said, “The production and enhancement of our sustainable food production system, while ensuring that agriculture plays its part in climate change mitigation, has been a priority for this government. I am committed to delivering on the three pillars of sustainability in agriculture – environmental, societal and crucially economic.”

Although, data from Climate Conversations 2022 shows that the Irish people are very concerned about climate change and want to play their part very sincerely. But they are worried about the affordability and sustainability of alternative methods. At this time when the whole world is struggling with inflation and trying to balance their finances, investing in climate mitigation methods seems to be an extra burden for them. Even if they want to make big changes, they seem impossible due to bureaucracy, price, and difficulty in accessing the proper support to make changes.

In addition, the unequal impact of transitions on different communities should also be considered carefully. For example, those communities whose livelihoods are linked to carbon-heavy industries, or people with low incomes will find these changes more challenging than anyone else. The government needs to consider these issues and work accordingly. Although, grants are being paid for several changes, but that is being paid after the change has been made. Instead of that if the government just start making those changes itself with their own expenditure, then it won’t affect the finances of the public and changes would be in place to help mitigate the effects of climate change.