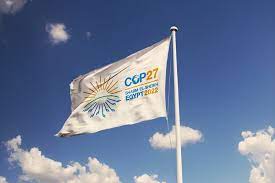 Next year’s COP27 conference will be held in Egypt. The Egyptians will host this important UN Climate summit after compromises at the COP26 conference held in Scotland.

King Charles III was initially invited to the COP27 as a fierce campaigner on environmental issues. According to the Sunday Times, Prime Minister Liz Truss is said to have raised objections at a personal meeting at Buckingham Palace last month.

Buckingham Palace has confirmed King Charles III will not attend the summit.

Already, it seems that this conference will be once more one of compromise. Many climate activists in the Global South argue the onus lies with richer countries in the Global North to pay their fair share for causing the climate catastrophe. For the first time in 30 years, the IPCC named colonialism a historical and ongoing factor in climate change.

Less than ten years ago, in the UK, Ella Adoo Kissi-Debrah was the first person in this country to have air pollution listed as a cause of death on her death certificate. Ella was also a Black child, showing the effects of environmental racism.

Climate change has been exacerbated by the West’s actions. Africa is currently responsible for only 3.8% of global greenhouse gas emissions. That is in contrast to 23% in China, 19% in the US, and 13% in the EU. Yet, African forests store around 150 tons of carbon per hectare, but they are also disappearing fast.

Last year the IPCC report was published by the UN declaring a code red for humanity. The landmark study warns of increasingly extreme heatwaves, droughts, and flooding, and a fundamental temperature limit being broken in just over a decade.

Despite these reports, the governments and big oil companies refuse to act against climate change, acknowledge the science, and tell the truth to contribute to the continuing disproportionate effects of climate change on the global majority world.

Yet, a few days after the IPCC report rang the final bell for planet Earth, the UK Government published its energy security strategy, saying that it would increase its exploration for oil and gas.

Even now, politicians within the current Conservative government receive donations from oil and gas companies and are not fully committed to Net Zero.

In the last year, wildfires across England have resulted in homes set alight and bushes burned. Among other catastrophes worldwide are floods in Afghanistan that left over 1,000 people dead, mudslides in Italy, famine in Madagascar, and hurricanes across North America.

Scientists still believe that a climate disaster can be avoided if there are deep reductions in the Earth’s temperature. For many climate activists, COP26, which was held in Scotland, was a disappointment. There were trade offs at COP26 due to resistance from countries such as China and Australia.

As Barbados Prime Minister Mia Mottley asked at COP 26, “Will they mourn us on the front line?” We shall see. The time has come for politicians to act for all of humanity. But the question remains, will they?