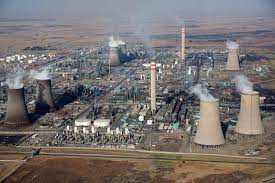 Mpumalanga is a province in Eastern South Africa bordering Swaziland and Mozambique. It is the hub of South Africa’s coal-mining industry and boasts 12 coal-fired plants. A case study by environmental organizations has declared that the province's air quality is amongst the worst in the world largely due to coal mining activities, uncontrollable underground fires, and power -stations burning coal. The air in the region is the most polluted in the world with a record level of nitrogen dioxide. The Social and Environmental Consequences of Coal Mining in South Africa, A Case Study, prepared by Victor Munnik.

In 2007, Department of Environmental Affairs designated the Highveld Area as a priority area under the Air Quality Act because of its poor-quality air. The department acknowledged that it was an air pollution hotspot of extremely poor air quality and that “there was little doubt that people living and working in these areas do enjoy air quality that is not harmful to their health and wellbeing”. Nearly 5 years later, in 2012, Ministry of Environmental Affairs published an air quality management plan to clean up the Highveld priority area’s air pollution. But since then, little has changed and the air pollution in the Highveld region is worse.

Human exposure to toxic chemical compounds emitted by the coal plants, such as sulphur dioxide, heavy metals like mercury, and fine particulate matter, results in chronic respiratory illnesses such as asthma, bronchitis, and lung cancer and contributes to strokes, heart attacks, birth defects, and premature death. Dr. Gray estimates in court papers that emissions from the facilities in the region caused between 305 to 650 early deaths in and around the Highveld Area in 2016. As many as 2,239 premature deaths annually can be attributed to air pollution from power plants in South Africa.

On behalf of the government, Environment Minister Barbara Creecy denied that the government is failing in its obligation to address pollution in the Mpumalanga Highveld.

On Monday 17 May 2021, a case about the toxic air pollution on the Mpumalanga Highveld was heard in the Pretoria High Court. It was opened by two environmental justice groups that were against the South African government.

On Tuesday, 22 March 2022, the South African High Court ruled that poor air quality is a breach of residents' constitutional rights to an environment that is not harmful to their health and well-being. The court ordered the South African government to reduce air pollution in the coal-mining belt ranked by Greenpeace as the world’s most polluting cluster.

Environmental justice groups in South Africa are celebrating the long-awaited landmark ruling that recognises the poor air quality in the region of Highveld in Mpumalanga province (South Africa). On March 25, the Pretoria High Court has given the government a one-year deadline to start enforcing the plan regarding the poor air quality in Mpumalanga.