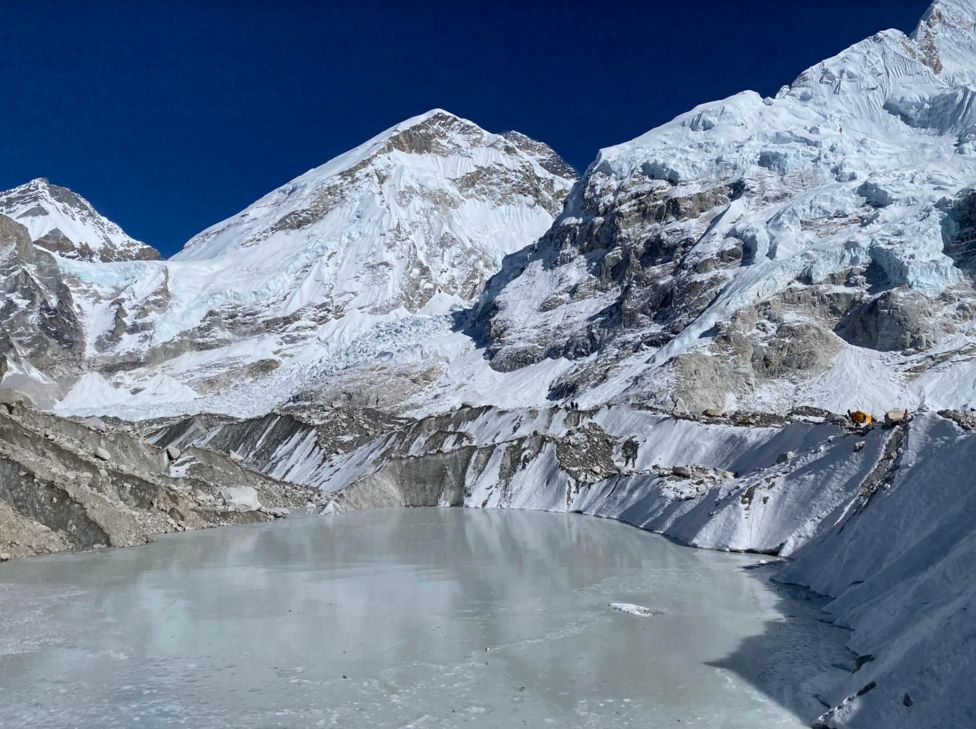 Lake appeared next to base camp between 2020 and 2021, according to the trekker Shree Gurung. Source: WORLD VLOG CHALLENGE.

According to recent reports, due to the worsening effects of global warming and human activity, Nepal is getting ready to move its Everest base camp. The camp is located on the Khumbu glacier and can accommodate up to 1,500 people during the spring climbing season.

The Nepali government made the decision after scientists discovered that the Khumbu glacier, along with several others in the Himalayas, is rapidly melting and weakening due to global warming. According to a study conducted by Leeds University researchers in 2018, the area near the base camp is thinning at a rate of 1 meter per year. According to the study, some areas of the glacier—known as ice cliffs—are made of exposed ice while the majority of the glacier is covered in rocky debris.

When the latter begins to melt, the glacier becomes unstable. This causes the stones and rocks on the ice cliffs to slide and collapse, creating new water sources and increasing rock falls and melt-water movement on the glacier's surface. The new lakes that have formed on the flattened glacier could provide a good source of water for the local population. Nonetheless, they pose risks because the dams made of sediment and rocks that block the lakes are unstable, and flooding can occur at any time.

In Nepal, scientists warned that global warming could have an impact on the ascent to the Himalayan peaks. These are warming at a rate of 0.3 to 0.7 degrees Celsius per year, much faster than the global average. The loss of ice from the mountain range has the potential to be disastrous for the 1.6 billion people who live in the mountains and downstream countries. Summer flow in the Indus, Ganges, and Brahmaputra rivers and their snow-fed tributaries is expected to increase until 2050 as glaciers melt, but then begin to decline as the ice melts.

As the air becomes thicker, global warming will cause a loss of high-elevation snow and ice cover, exposing the bedrock and increasing oxygen availability. Nonetheless, this phenomenon will cause more ice block movement in the Khumbu glacier, increasing the risk of avalanches, especially for mountaineers who visit the homonymous base camp on an annual basis.

Authorities in Nepal discovered cracks on the glacier's surface that appeared overnight. As a result, the decision to relocate the camp base to avoid potential hazards is viewed as the only viable option. Furthermore, the Sagarmatha Pollution Control Committee (SPCC) stated that human activities at the camp exacerbate the problem. For example, it has been discovered that people urinate approximately 4,000 liters per day and that a significant amount of cooking and heating fuels, such as kerosene and gas, have undoubtedly an impact on the glacier's ice.

Nonetheless, moving the camp is not a simple decision. Everest base camp manager Tshering Tenzing Sherpa stated that the current base camp location is still largely stable and could be used for another three to four years. However, Nepalese authorities believe that the transfer will take place in 2024. The discussion with the local communities will be crucial. Hotter temperatures and shifting rainfall patterns would have an impact on Nepal's current livelihoods, which rely on tourism and traditional farming methods.

Poor people's lifestyles are already changing as water sources dry up, posing a threat to agriculture. The village of Kyanjin, located at 3,800 meters above sea level in Langtang National Park, is an excellent example. The traditional economy of the local community was based on the production of organic yak cheese. Its primary component, milk, has recently been impacted by the decreased amount of snowfall in the mountains surrounding the village. Less snow means less grass for yaks, and the Himalayan cattle, which means less milk produced.

This is hardly surprising. A recent study, conducted in 2022 and focusing on the upper peaks of mountain ranges, showed that the implications of the global warming phenomenon associated with the retreat of mountain glaciers are severe for the population. Global warming will result in a significant loss of water storage capacity for agriculture, hydro-power, and both human and ecological use, with serious consequences for the 250 million people who live near mountain glaciers.

These sudden changes are causing locals to abandon their traditional farming activities in favor of tourism. All the same, global warming is having a significant impact on this industry. Poverty, marginalization, state apathy, and inequalities have always plagued Himalayan countries, and climate change is only exacerbating the situation. This is a tangible example of how insanity in the industrialized world is beginning to take a human toll.