Nord Stream 2 - The magic solution to the energy crisis in Europe? 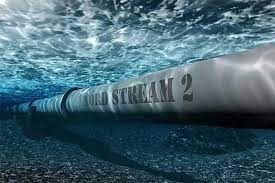 The Nord Stream 2 is a new system of gas pipelines from Russia to Germany traveling across the Baltic Sea. The route spans 12000 kilometers and, the project is under Gazprom. It is communist Russia's state-owned Energy Corporation and so under the government's thumb. It could have been amassed earlier, but the US removed sanctions on its completion only recently. It can carry 55 billion cubic meters of gas per year. This stream cumulatively with existing Nord lines will supply 110 billion cubic meters of gas a year to Germany. It would be a crucial step in the comfort of the energy crisis in Europe due to post covid rising demand and weather glitches. While China is working on drastic internal changes like power cuts and increased coal digging, Europe is being sure of Russia. Gazprom is under the radar by investigators on allegations that it is intentionally withholding supplies to raise demands. Russia is the central source of oil for the EU, its share accounting for more than 37%. Many EU countries and the US are contemplating it as a geopolitical project of Russia to increase its influence over Europe.

The deputy Prime Minister of Russia Alexander Novak said that the Nord Stream 2 could get the oil prices back in control. The European Parliament believes that NS2P is the very reason for the crisis, as Gazprom caused the shortage. Russia seems to be using Gazprom's monopoly on gas supply as a bargaining chip to lure Germany's clearance. The backbone of the German economy is the manufacturing sector primarily of automobiles, mechanical, chemical, and electrical engineering. All these are fuel-intensive since natural gas emits less carbon Germany prefers it. So the NS2P is beneficial for the country and, a rural state even established a foundation to aid its construction. Critics feel that European energy security would be constrained by Moscow's influence. In case of any future differences with Russia, it can use it as a weapon to cripple the energy structure of Europe. Swedish military experts stated that the pipeline might cause security policy problems in Sweden.

The relationship between the US and Russia needs no introduction. Hence one can understand US reservations over NS2P. It failed to dissuade Germany and had to approve of the project grudgingly. It is a result of weak diplomatic decisions by the US, Joe Biden's government is not the only one to bear all blame. The sour equation of Trump and Merkel are also contributory the US did not jump to use the political differences in Germany in 2014. Trump was peculiarly frustrated over it when he said that Germany was now "totally controlled by Russia." Despite these warnings, the fact remains that the EU needs Russian hydrocarbons even if it is wary of President Putin. After the Crimean conflict of 2014, Ukraine is also an opponent of Russia. The first stream of the Nord runs through Ukraine and, it is paranoid that after the completion of NS2P, Russia would bypass the Ukrainian pipeline depriving it of its transit fees. The Biden administration has decided to retain some dignity for a project, which would be done anyway. So US has threatened Russia with consequences if it uses NS2P to harm Ukraine or any other European country. Republicans have to disparage this approach on the grounds of losing the influence of the country over Europe. Republican leader Ted Cruz said that the NS2P is "a generational geopolitical win for Putin and a catastrophe for the United States and our allies." Ukrainian President Volodymyr Zelenskiy showed his dissatisfaction by saying that he wants a "frank and vibrant" discussion with Biden over it.

The environment in the mix

The primary Environmental impact linked with the pipeline results from the consumption of the transported gas. This is contrary to the decarbonization efforts of Europe. They were also concerned that the seabed would be interrupted causing World War-era mines and toxic waste to rise to the surface. Sweden's three opposition parties called for scrutiny of the project's environmental impact of the pipeline on the sensitive ecosystem of the Baltic. Estonian Parliament warned that the NS2P would rip the canals of the seabed. World Wide Fund for Nature also urged all countries to protect the Baltic environment altered by the stream's construction. Greenpeace is also concerned that the NS2P would pass through endangered marine areas. As expected Russia claimed that all these concerns were boastful.

First and foremost, Europe's dependence on Russia will rise from 40% to about 60% or more according to estimates. So Russia will gain a position of power.

After NS2P, Ukraine will lose a transit fee of $3 billion per year, which will be a significant blow to their already fragile economy.

Germany would be contributing at least $175 million to the Green Fund for Ukraine campaign to pacify ruffled feathers.