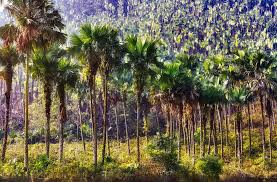 More than half of the world's palm trees risk extinction, according to a new study.

It was conducted by an international team composed of researchers from the Royal Botanic Gardens, Kew, the University of Amsterdam, and the University of Zurich. They used new machine learning techniques with existing International Union for Conservation of Nature (IUCN) Red List data to forecast the future of palms.

Palm trees are big beautiful trees that provide not only shelter but food for the inhabitants of many islands. Coconuts are often associated with the tree. Palms are usually found in the Caribbean, yet there are exceptions, for palms are also found in swamps or poorly drained areas

Concerns have been raised regarding the disappearance of untamed cousins of famous decorative or widely developed palms. Palm trees are vital to many small islands that rely on tourism to maintain a strong economy. Yet, the threat of extinction presents many questions and fears.

Plants that belong to the palm family are found in over 200 regions. Although the trees face extinction, the threat level, how many areas will be affected, and how quickly are still unknown. According to their findings, nearly a thousand genera, or slightly more than half of all palms, are on the brink of disappearance.

"Palms are the most iconic plant group in the tropics and one of the most useful too. After this study, we have a much better idea of how many, and which, palm species are under threat," notes Rodrigo Cámara-Leret, a senior researcher at the University of Zurich.

"It is our hope that the prioritized list we provide of useful palms facing extinction and of their non-threatened alternatives may foster collaborations across all stakeholders and accelerate actions to conserve them," Camara-Leret adds.

However, their existence is at risk. Scientists have looked into the health of the tree family and found that approximately 50% of all palm trees face extinction. The research concluded that Hawaii, Borneo, Jamaica, Vietnam, and Vanuatu were the main areas for palm conservation.

Palm trees are vital to the ecosystem, with hundreds of wild animals relying on their continued existence.

Scientists have issued an urgent warning to humanity that, as a society, we must prevent tree extinction or face ecological disaster. Without large trees, less carbon dioxide would be absorbed from the atmosphere, as tree leaves absorb it. Without this, the Earth's temperature will continue to increase, worsening the climate change problem.

Sidonie Bellot, a scientist at the Royal Botanic Gardens, Kew, in London, who led the study, says, "We need to do all we can to protect biodiversity and that encompasses more than a thousand palm species that we now know may be threatened."

It is clear that the dangers of climate change will affect not only people but all inhabitants and plants that are vital to maintaining the ecosystem. It will be those that have contributed the least to climate change that will suffer the most.

Is the UK On the Way to Meet Climate Change Targets?